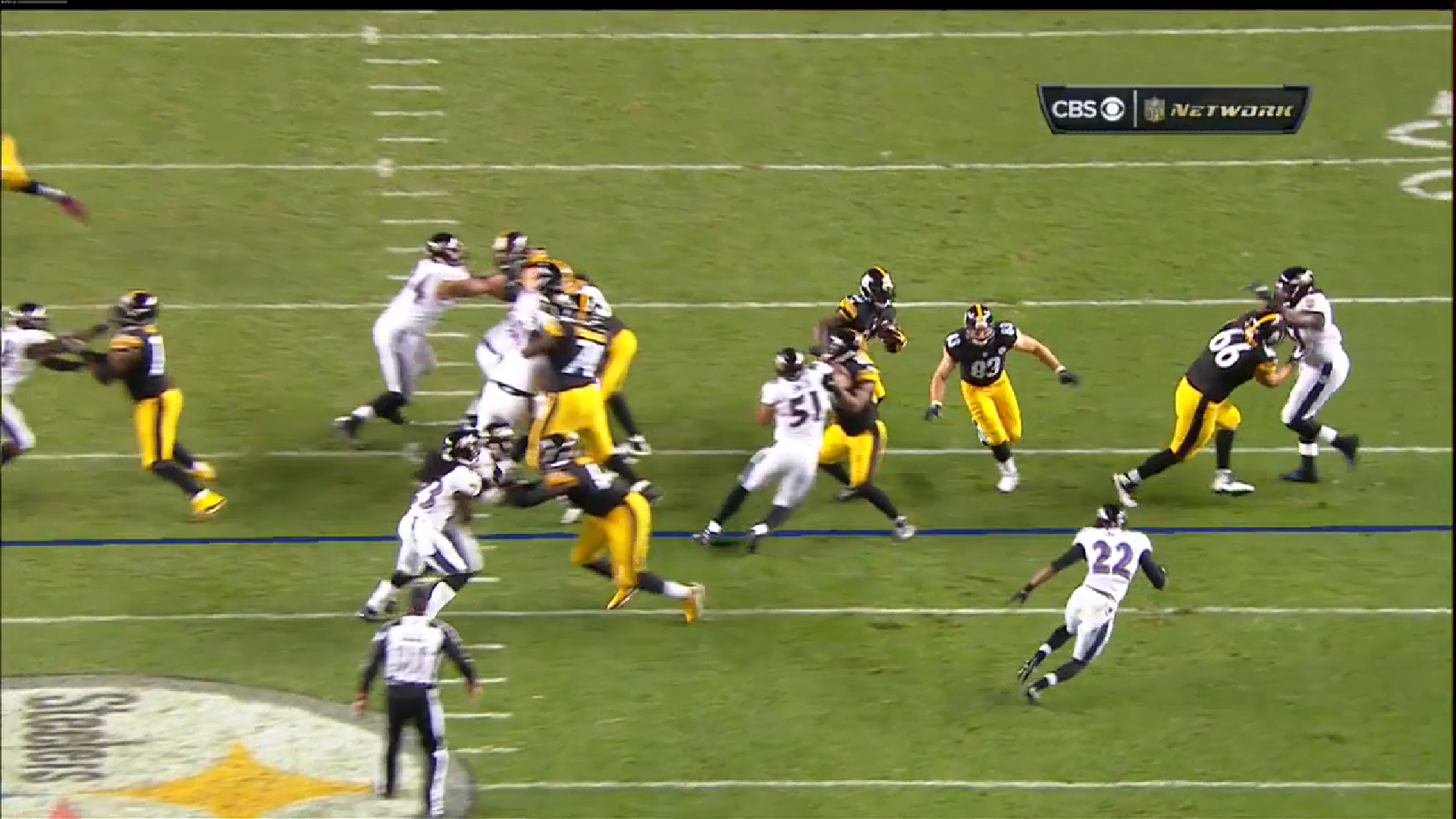 For every year since 2013, I have been watching David DeCastro, the Pittsburgh Steelers’ 2012 first-round draft pick, at right guard, looking for the improvements necessary to vault him to the Pro Bowl status that he was pegged with back then when he was regarded as a steal.

The guard has turned into an above average lineman, but his game still lacks a level of consistency required to regard him as a great at his position in the game right now. Not that there is anything wrong with being an above average guard who has specific assets that are legitimately special, as his pull blocking has come to define the Steelers’ most successful running play over the span of the last three years.

It’s rare that DeCastro plays a bad game, and Thursday night’s performance against Baltimore certainly was not among them, though he did continue to display the aforementioned inconsistency that is preventing him from being regarded as a Pro Bowl player.

An example of that came on the second play of the game, on a simply running play to the right, which, it is worth noting, came after the first of two false starts on DeCastro. Off the snap, the right guard’s assignment appeared to call for a chip on the left end before peeling out to the linebackers.

Only the end knocked him off-balance with a swim move that sent him spinning and showing his back to the defense, opening the lane for the inside linebacker to scape over and fill the hole to string the run outside, which went for a loss. As you can see, had DeCastro been able to reach his second-level block, there was an alley for Le’Veon Bell to run through for a decent gain.

Not that it was all bad. Later, on the Steelers’ next drive, he handled nose tackle Brandon Williams one-on-one well enough that the back was able to cut up inside for an eight-yard gain. On the following play, Bell was able to pick up 11 yards around DeCastro’s outside shoulder after the guard had gotten the end turned inside.

But then on the first play of the second quarter, DeCastro was too slow to get out to Daryl Smith on a screen block. The inside linebacker was able to get by easily by making himself skinny and taking the inside route, blowing up the play for no gain.

As we turn to the third quarter, we do see an area in which DeCastro has made improvement, that being pass protection. Two plays after his second false start, the guard did an excellent job of getting his defender turned on a screen pass out to the flat to take him out of the play, which went for seven yards. The Steelers scored on the next play.

Midway through the third quarter, DeCastro offered some impressive one-on-one work in pass protection against Timmy Jernigan, giving up some ground but ultimately anchoring and holding his block for about six seconds before Michael Vick inexplicably managed to take a sack.

Finally, as we get to the fourth quarter, we take a look at two examples of the Steelers’ ever-popular counter run, the first being an example that does not work, and what that looks like, and the second being one that does.

On a first-down run, DeCastro pulled around left end, along with Heath Miller, as the guard went out to hit Courtney Upshaw, initially getting him turned inside but losing leverage quickly. Miller was unable to get to his block quick enough, forcing Bell to cut upfield, but by then Upshaw had gotten off his block, making the tackle after a three-yard gain. 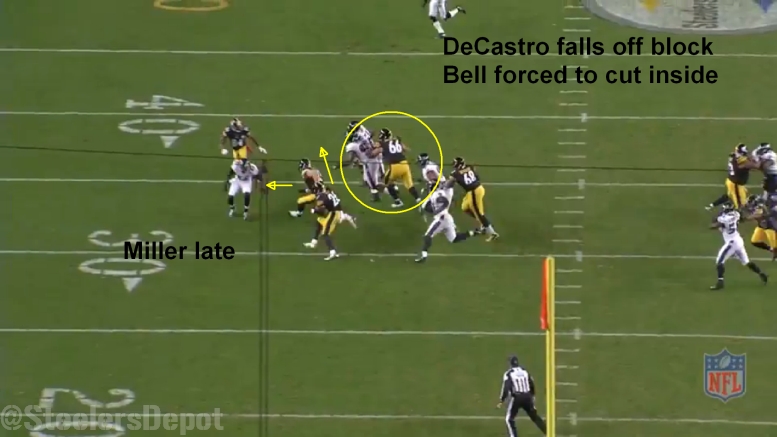 About five minutes later in the fourth quarter, however, the counter worked well for a 21-yard gain, although with a bit of a different alignment, running a 13 rather than 12 package and pushing the strong side to the play side to the left. Again, both DeCastro and Miller pulled, but this time they both hit their blocks on schedule, with positive results.

The power counter is the one truly great asset that DeCastro boasts that has the potential to elevate him to great someday if he ever manages to tie everything together, and to perform consistently on a play-to-play basis.

He doesn’t have to be perfect, for sure, but cutting down on a negative play or two per game could go a long way, both for himself and for the offense, as he has that type of impact potential, and the Steelers put him in positions to make that type of impact.