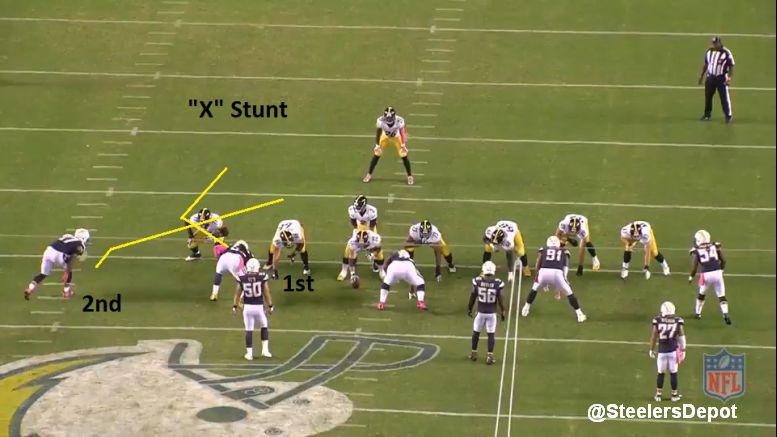 Our weekly Pittsburgh Steelers sack breakdown, turning to the film for the three given up Monday night against the San Diego Chargers.

1. 3rd and 6, 7:10 1st. 11 personnel. Steelers keep seven in to block against what is essentially a four man rush. With Mike Vick shoved out of bounds, this isn’t a conventional sack. It’s similar to the one allowed against the St. Louis Rams, which I didn’t count or cover, but the difference is this sack lost two yards. The one against the Rams went for no gain. To me, no gain “sacks” shouldn’t be counted as such. It isn’t in college and shouldn’t be in the NFL.

Off my soapbox, here we get Melvin Ingram rushing the weak A gap from an inside linebacker spot. He does a nice job overwhelming center Cody Wallace, running through him and collapsing the pocket. 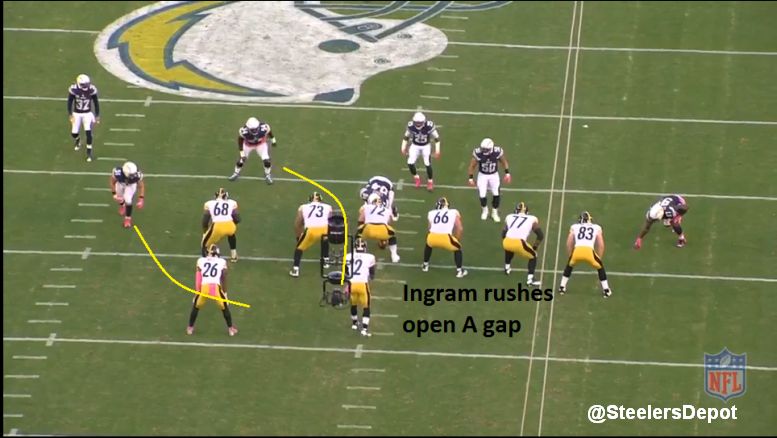 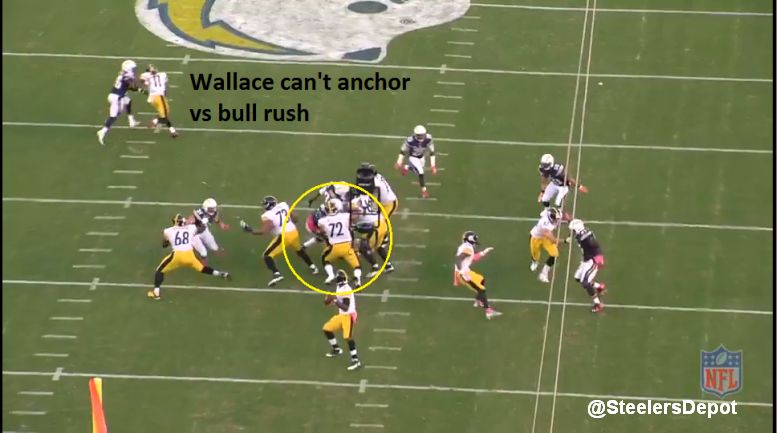 It forces Vick to justifiably scramble to his left, allowing the LOLB to disengage from Kelvin Beachum – the defender only has to go around the tackle, not through – and chase the QB to the sideline. 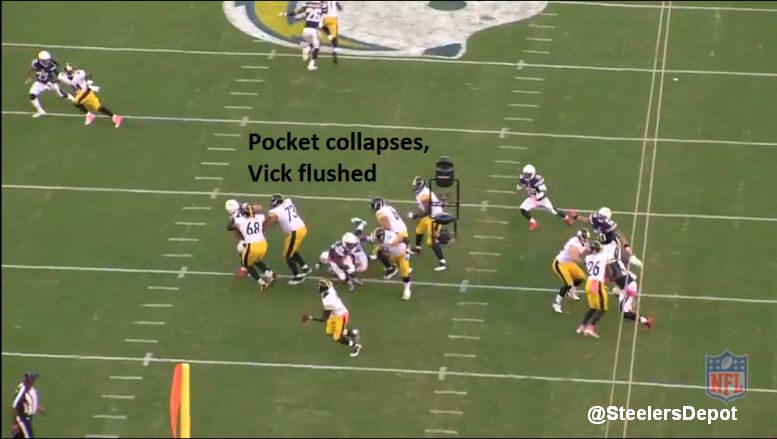 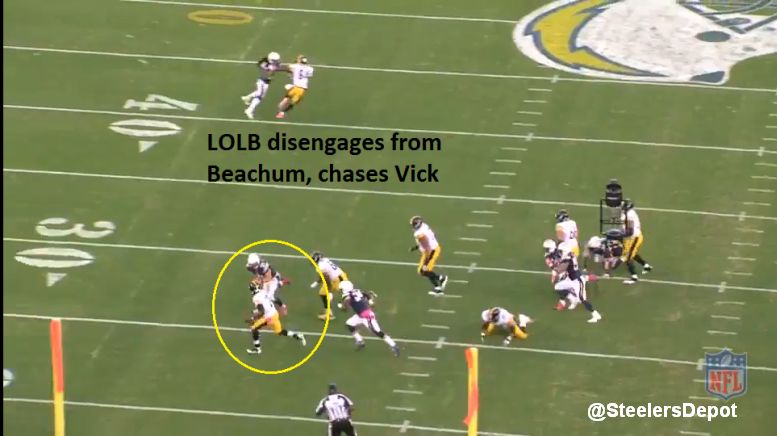 If you’re wondering if there were any options downfield for Vick, there weren’t. Five defenders on three receivers is a bad recipe to get open. 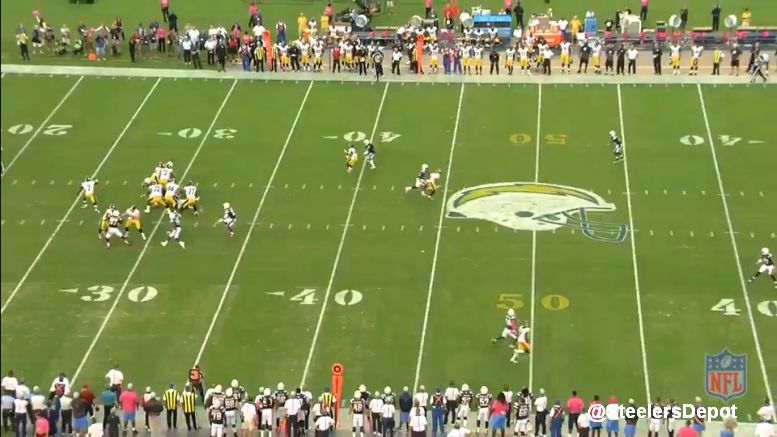 Ultimately, Wallace allowed the initial pressure that flushed Vick. So the blame goes on him, even though there have been more egregious breakdowns in the past.

2. 3rd and 7, 1:40 2nd. 11 personnel. Six to block versus five rush. Simple linebacker stunt with a late blitz by one of the Chargers’ defensive backs. It’s picked up well. David DeCastro slides down to seal #97 Jeremiah Attaochu with Le’Veon Bell squaring up to the defensive back. 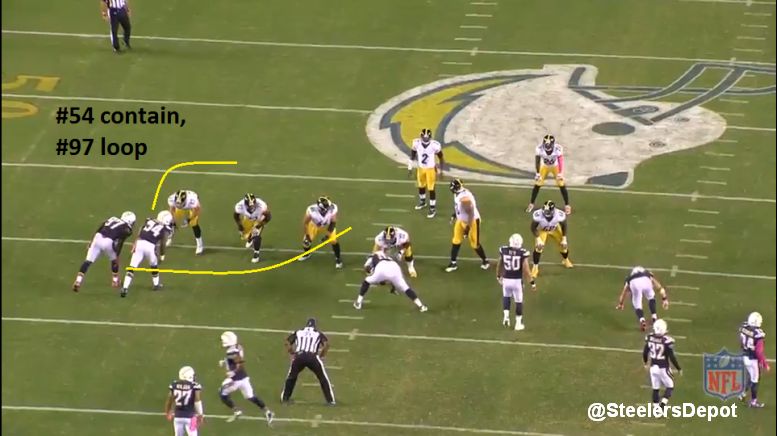 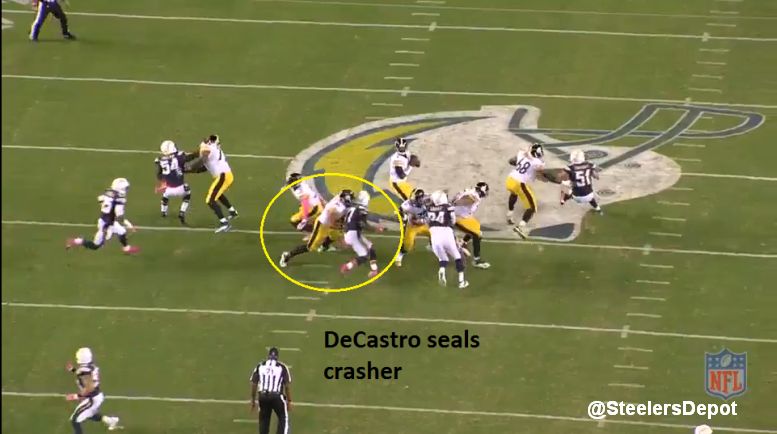 I’ve isolated two issues on this play. Vick doesn’t do a great job handling the pressure. The original pocket isn’t there but it isn’t gone either. Rather, it’s just shifted slightly to his right. Instead of sliding, maintaining his base and keeping his eyes downfield, he squares his shoulders parallel to the LOS and seems anxious to take off. 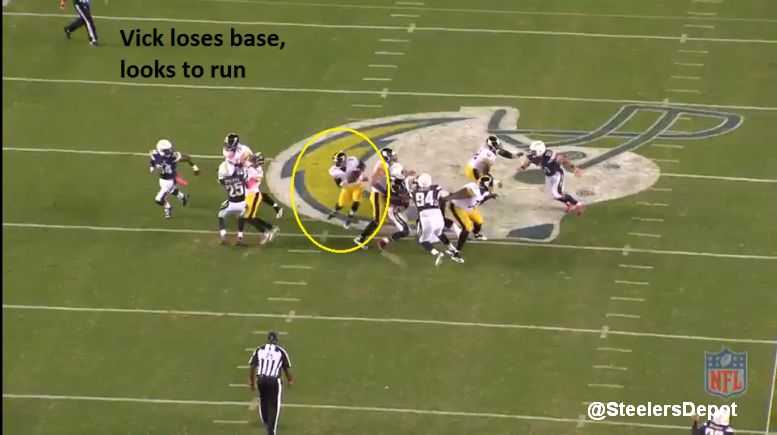 In doing so, he loses reading three viable options to throw to on the play: Markus Wheaton down the right sideline, Heath Miller underneath, and Antonio Brown on the backside crosser working towards Vick. 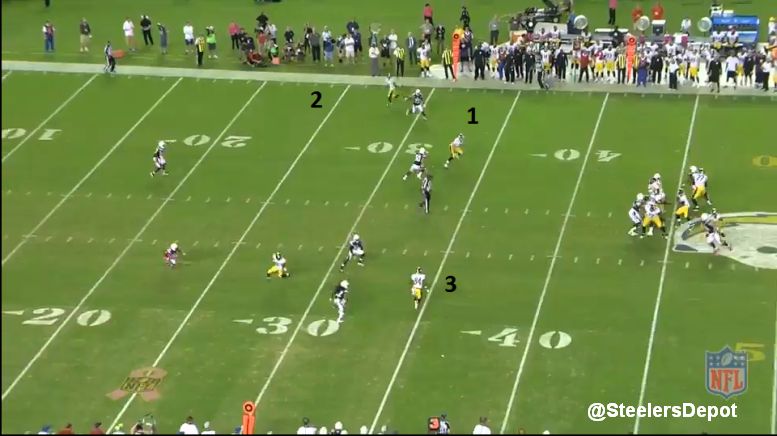 Vick has always been one with a tendency to take off, and hey, it worked on his 24 yard scramble at the end of the game, but most quarterbacks are hanging in the pocket and showing better composure than this. Just one of his ills and a habit you’re not breaking.

The other issue is with Wallace. Initially, he and Ramon Foster double Corey Liuget. We’ve seen Foster work off blocks to give help Beachum, even if it has occasionally hurt him, so seeing him disengage because he has help isn’t a surprise and probably not his fault.

However, Wallace also leaves. I get why – he feels someone rushing into his gap. He didn’t realize Foster was leaving too and tries to pass him off. Basic communication breakdown. But Wallace has to understand Foster’s ability/tendency to leave the block, and use his peripherals to pick up DeCastro sealing Attachou. He leaves, Liuget is left free, and pounces on Vick as he steps up to take off. 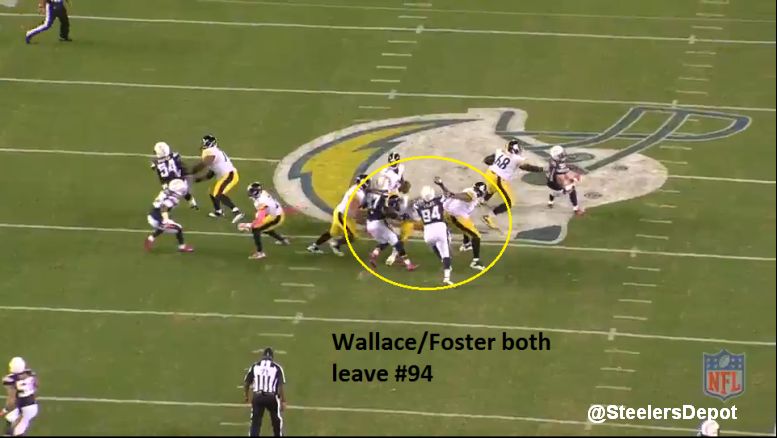 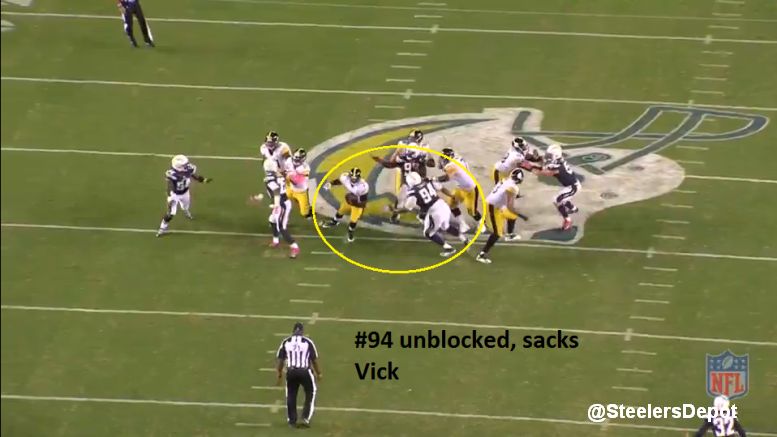 Blame: Half on Vick, half on Wallace

3. 1st and 10, 8:48 3rd. 12 personnel. Six blocking against a five man rush. Playaction from Vick. Simple “X” stunt from the DE/OLB. Defensive end rushes first, has contain principle, with the outside linebacker penetrating inside.

DeCastro and Marcus Gilbert never pass it off, meaning Gilbert has no chance of staying square to the OLB. He actually does an impressive job to seal him the way he does, moving laterally and through DeCastro with the outside linebacker having the freedom of running downhill. 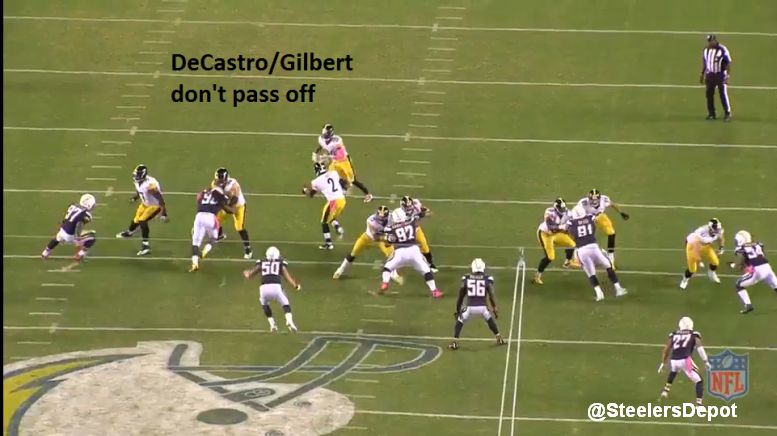 It creates the initial pressure, forcing Vick to climb, while the defensive end is able to disengage from DeCastro and jump on top of Vick. 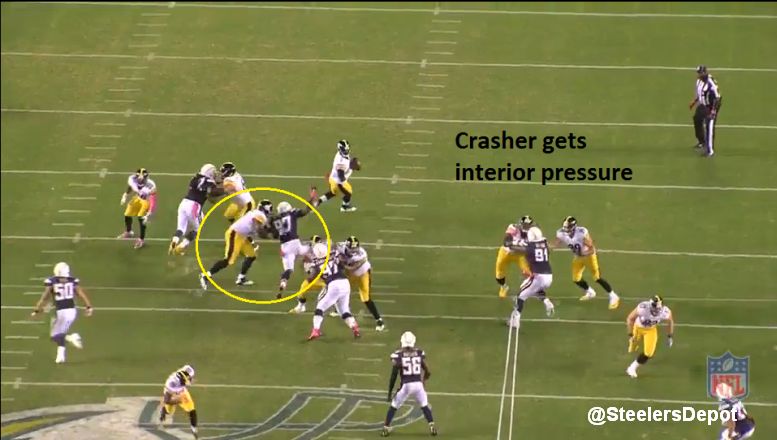 This could very well be one either Gilbert or DeCastro for poor recognition and communication. I can’t decipher who though so I will put half the blame on each. Takes two to tango.

Blame: Half of Marcus Gilbert, half on David DeCastro

*One last side note that is frustrating the heck out of me. I haven’t crunched the numbers but it is incredibly upsetting the number of times the Steelers have allowed a sack with at least one more blocker than the defense was rushing. In some cases, two and even three more. I’ll have to break that down. But when you’re blocking with more than they have coming and they’re still getting home, you’re having some serious protection issues.