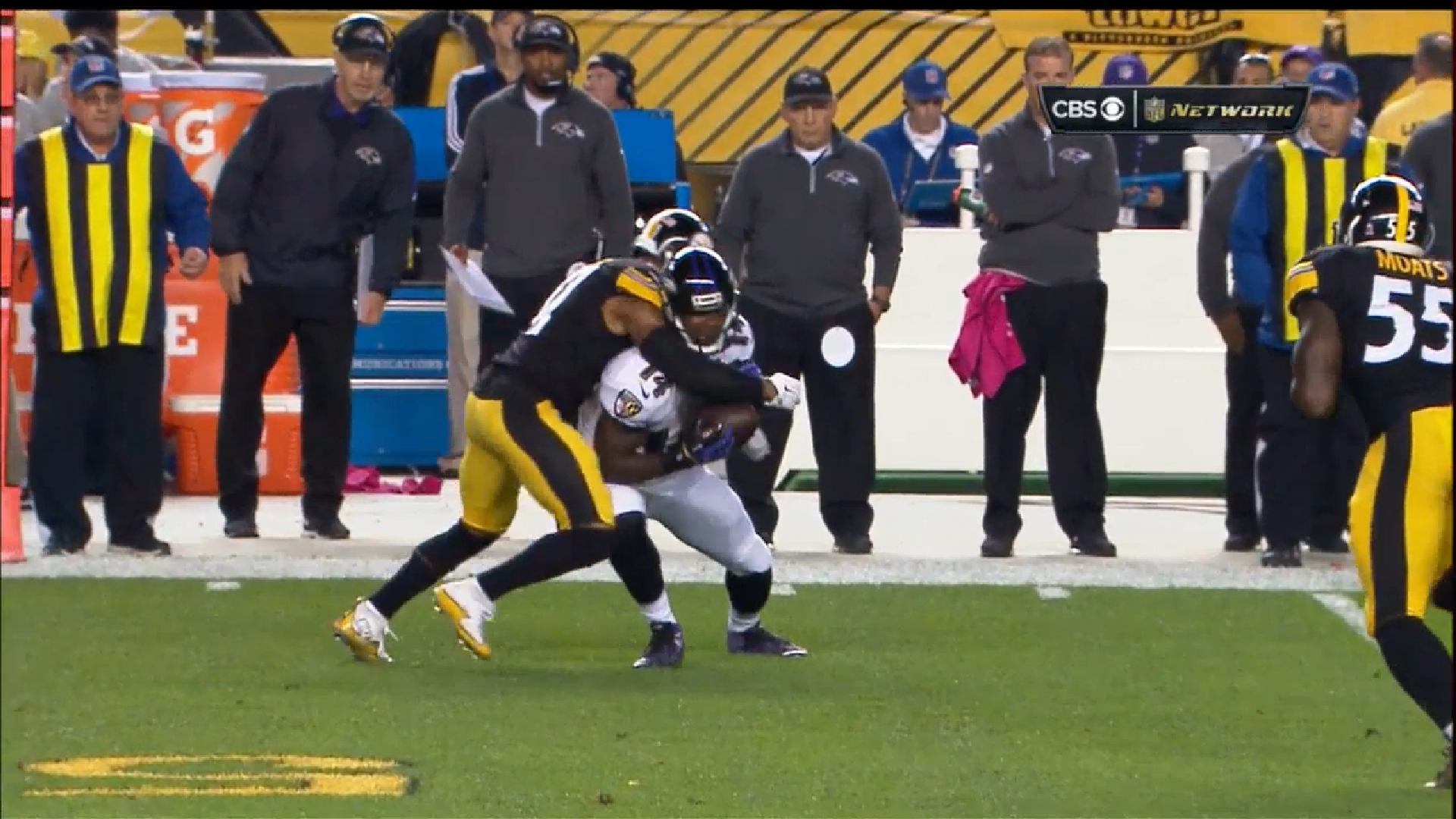 Pittsburgh Steelers starting cornerback Antwon Blake has been one of the most widely discussed—or rather debated—players on the roster thus far this season, and with good reason, considering it was a bit of a surprise that he is in the starting lineup at all.

But there is plenty of work of his to break down from the last game against the Ravens, so it’s best to get right into it without much discussion, as the play largely speaks for itself, highlighting the ups and downs of his game.

The first play of note is the second of the game on defense, on second and 10. Blake is playing off coverage, as the defense typically does, but he uses his occasionally excellent see-to-do and timing to hit the receiver as he is pulling in the ball, forcing an incompletion.

On the first play of the second Ravens drive, he was not credited with an assist, let alone a tackle, but perhaps he should have. The fourth-year cornerback has a reputation for seeking contact in spite of his size, and he came charging in from a deep set to play the run on a carry that went for no gain.

Of course, later on during the same drive, he allowed Justin Forsett to slip through his tackle attempt, which resulted in an 11-yard gain, nearly all of which came after contact. His missed tackles are increasingly becoming a concern.

In the midst of Baltimore’s first drive of the second quarter, Blake was late in identifying his assignment in covering Kamar Aiken on a drag route over the middle, for which he was left wide open for a 14-yard gain that brought the Ravens to Pittsburgh’s 34-yard line, though the drive ended in an interception.

His lapses in recognition are also becoming an issue, but it is also baffling when juxtaposed against the instinctual plays that he comes up with on occasion, as when he drifted off coverage after identifying a drag route the opposite way in the third quarter, coming up to make the hard tackle after limiting the reception to a three-yard gain.

But again, he proceeded to come back with another missed tackle that allowed a reception to go for much more than it should have.

Late in the quarter, on a third and two play, he was one of two defenders who hammered Steve Smith on a flat route that left the veteran short of the first-down marker, and it was Blake’s impact that ultimately held him short.

And yet he came back on the next play to miss a tackle on the tight end at the first-down marker to allow the conversion. While it would have been difficult for him to bring down the larger player short of the sticks on that occasion, he missed the tackle entirely and allowed a seven-yard gain.

As that late third-quarter drive bled into the fourth, the Steelers had an opportunity to get off the field on third and two again, which resulted in an incompletion, but Blake was flagged for defensive holding on Aiken. Upon replay, the penalty is obvious, and caused the receiver to slip, as seen below. 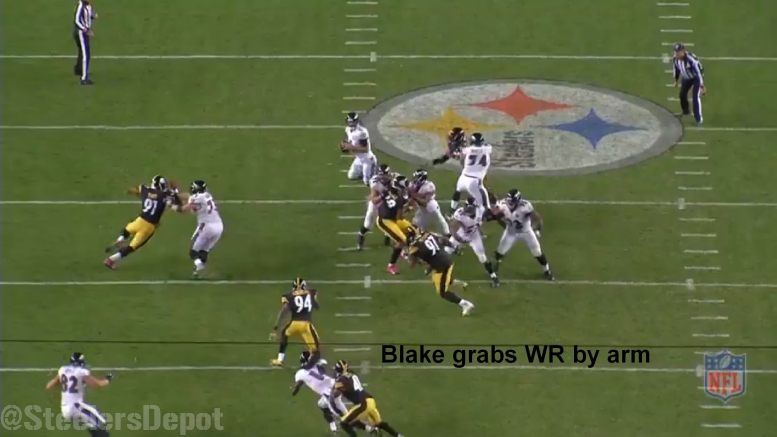 Late in the fourth quarter, on third down, with the Ravens’ trailing by three, Blake came up with the excellent pass defense on a deep route from their own 39, getting his arm between the receiver’s arms to break up the pass.

We have seen him make this play. It’s something in his arsenal, and probably one of the reasons the coaching staff have him in the starting lineup. But to do it consistently without a penalty has been a challenge.

Of course, late in the fourth quarter, Blake gave up a 20-yard reception to Aiken that put the Ravens at the 32-yard line that set up the game-tying field goal. The cornerback broke down too quickly, looking for an inside move while the receiver worked to the corner out of his break.

As the above play shows, he lacks consistent fluidity in his footwork, which was really put on display when the Steelers used him in the slot in the season opener against one of the best slot receivers in the game. But it continues to show up on his tape, including on an 11-yard reception that he gave up to Aiken in overtime to Pittsburgh’s 44-yard line.

This choppy, indecisive footwork results in Blake losing steps, which works to marginalize his speed, as his inconsistent tackling ability works against his tenacity. Essentially, he cannot mask his weaknesses because they show up when he plays to his strengths, and there is no ready solution for improvement.