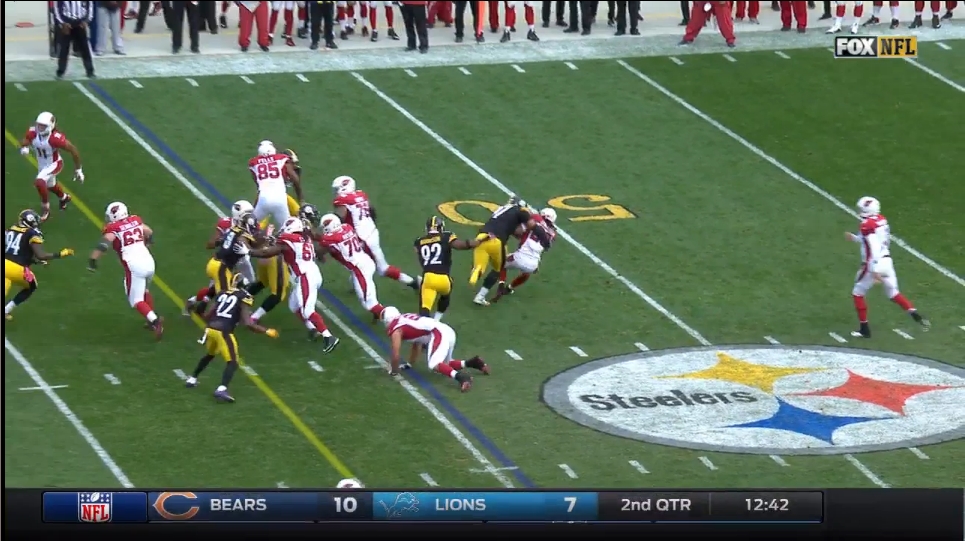 While there are no negative repercussions to giving Landry Jones, Martavis Bryant, and Le’Veon Bell the game balls for their remarkable performance against Arizona, Steelers fans would be remiss to not credit the defense for another spectacular performance. While the unit has been excellent during every game since Week 1, missed tackles have been a huge concern, a category the Steelers have unfortunately led the league in by a wide margin this season.

That all changed on Sunday, when the Steelers missed just three tackles in their 25-13 victory over the visiting Cardinals, including zero whiffs in the second half. Your missed tackle culprits:

Blake’s lone miss came in 13 attempts, as he led the team with 12 tackles. Of course, making a lot of tackles is quite simple when the guy you are covering is catching the ball in front of you every time he’s targeted, but more on that another day. This is a happy post.

Thomas missed his first tackle of the season yesterday, although it should be noted that he exhibited great effort to get himself in position for a stop. Golden was mostly solid, but Larry Fitzgerald whizzed by him on one first half catch when the safety couldn’t move laterally in time to make what should have been a fairly simple stop.

If you want to track down the defensive difference between this game and every other one this season (even Week 1 to some extent), look no further than the missed tackles category. Pittsburgh has not been victimized by many big plays this season, with Torrey Smith’s 75-yard grab with the game already decided against San Francisco the only touchdown scored against the team from a greater distance than 16 yards. Instead it has been team’s methodically marching the ball down the field on Pittsburgh, typically as the beneficiaries of several missed tackles.

You can look at the New England game, where Rob Gronkowski broke two tackles on his way to  the first touchdown of the season early in the second quarter. Or you can look at the loss to Baltimore, when Michael Campanaro scored the Ravens first touchdown on a 3rd-and-2 from the Steelers 9-yard line, despite the fact that Arthur Moats had him dead to rights in the backfield and Will Allen whiffed on him several yards shy of the goal line. IF not for those two misses, the Ravens are forced to kick a field goal, and we might never be talking about overtime or a loss.

Those two plays aren’t isolated incidents either. Against the Rams, the Steelers likely would have had a shutout if they hadn’t missed a plethora of tackles that allowed St. Louis to get into field goal range on two separate drives. Both the Rams field goal drives were the result of four missed Steelers tackles on each possession, including Moats missing a TFL that resulted in a 24-yard gain to the Pittsburgh 7 on St. Louis’ second scoring drive. Obviously the defense played well and were aided by the ineptitude of St. Louis’ offense, but a legitimate shutout was on the table if not for missed tackles.

Against the Chargers missed tackles were a huge obstacle the defense had to overcome, as the team missed 18, their second-worst mark of the season. Pittsburgh missed five stops on the Chargers first scoring drive of the game, resulting in an early 7-0 lead for San Diego.

But what happens when the defense eliminates the misses and makes sure stops? You hold the #1 ranked offense in the NFL to 13 points, including a solitary field goal in the second half. The Cardinals came into the game averaging 38 points per game, but could only find the end zone once against Pittsburgh. Even that drive was quite questionable, as Palmer’s 3rd down pass from the Steelers 39-yard line was ruled to be completed down to the Pittsburgh 7 for 32 yards early in the first quarter. Replays appeared to clearly show the ball slip through Andre Ellington’s arms and bounce off the ground, but Pittsburgh curiously did not challenge the play. If they had, the Steelers may have kept Arizona out of the end zone for good, rather than allowing Michael Floyd to score from three yards out just three snaps later.

For a defense that has played consistently extraordinary football since the Week 1 debacle, the missing ingredient has been sound tackling. If the Steelers can continue to rectify these mistakes, there is no end to what this defense can accomplish throughout the 2015 campaign.