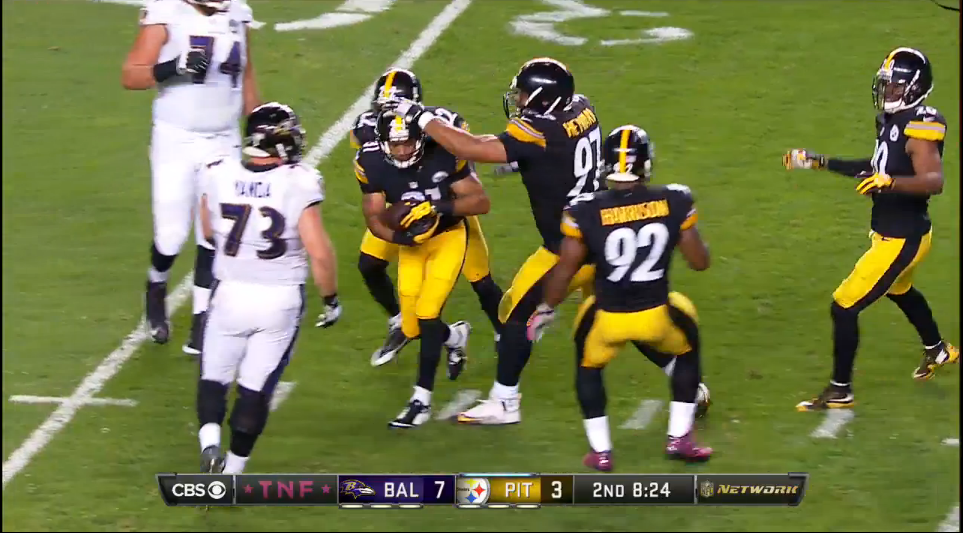 As we’ll do every four weeks, my interesting notes from the Pittsburgh Steelers’ defense based off my charting I complete each week.

– The Steelers have faced 275 snaps this season, excluding kneeldowns and pre-snap penatlies. The New England Patriots ran 60, the San Francisco 49ers 86, the St. Louis Rams 50, and the Baltimore Ravens 79. So quite the pattern.

As the numbers reflect, the team has been in nickel more than they have in their base defense. That’s the trend in the NFL.

– The Steelers have allowed an average of 4.7 yards after the catch this year.

– Keith Butler has blitzed on 34.3% of his opportunities this year. That’s up from 28% last year under Dick LeBeau.

– The Steelers have sent three or four rushers 93 times. They’ve sent five to six on 47 occasions. It’s not a bad ratio.

– We’ll break the rest down by position.

– Stephon Tuitt (88.7%) and Cameron Heyward (85.5%) are just playing an absurd amount of snaps. Speaks to a lack of depth but also their talent and conditioning. Just have to hope they don’t wear down throughout the year, especially the second-year Tuitt who has never had to log playing time like this. Tuitt is on pace for 976 snaps.

– Cam Thomas has been mixed in lightly, only seeing an average of ten snaps per game at defensive end. He has 57 in total.

– All the nickel sets have hindered Steve McLendon’s playing time. Even with Daniel McCullers out of the lineup the last two weeks, McLendon has been involved in just over one-third of the team’s snaps. 101 of the 275.

– Tuitt and Heyward have each dropped once in coverage.

– Pittsburgh has only used that “faux 4-3” 19 times. Most of that came in Week Three against San Francisco.

– Obviously, Lawrence Timmons has played the most snaps of the group, participating in all 275. The second most is James Harrison with 159. So much for all the talk about 25 per game.

– Bud Dupree leads Arthur Moats in snaps 141 to 127. Bet no one predicted that over the first four weeks.

– Counters for the number of times outside linebackers have dropped into coverage:

– William Gay and Will Allen are tied for the lead with 267 snaps.

– Gay is incredibly versatile, giving the team positive snaps at all three spots. 74 on the left side, 141 in the nickel, and 52 on the right side.

– Not including acting as the dime defender, Will Allen has played in the box 55 times. Mike Mitchell has on 19.

– Shamarko Thomas has logged four snaps this year. The only player active in every game, anywhere on the defense, with fewer is Ross Ventrone with a goose egg. Thomas has to be pretty disappointed in squandering his opportunity.

– A defensive back has been brought on a blitz 30 times. Based on my chart last year, this only happened 66 times under LeBeau. On pace for 120 under Butler.

– I am still pretty stingy on what I consider a target but tried to relax my criteria a little bit more this year. Still looking at players where the defender clearly has a chance to make a play on the ball. Allowed a five yard hitch while playing in the deep third zone is not a target, and it’s unfair to penalize a player for that.

With that said, the notables.

– Will Allen is 3/7 with a touchdown allowed and an interception.

– Antwon Blake is has allowed four catches on nine targets for 41 yards. This also includes a successful two point conversion thrown against him.