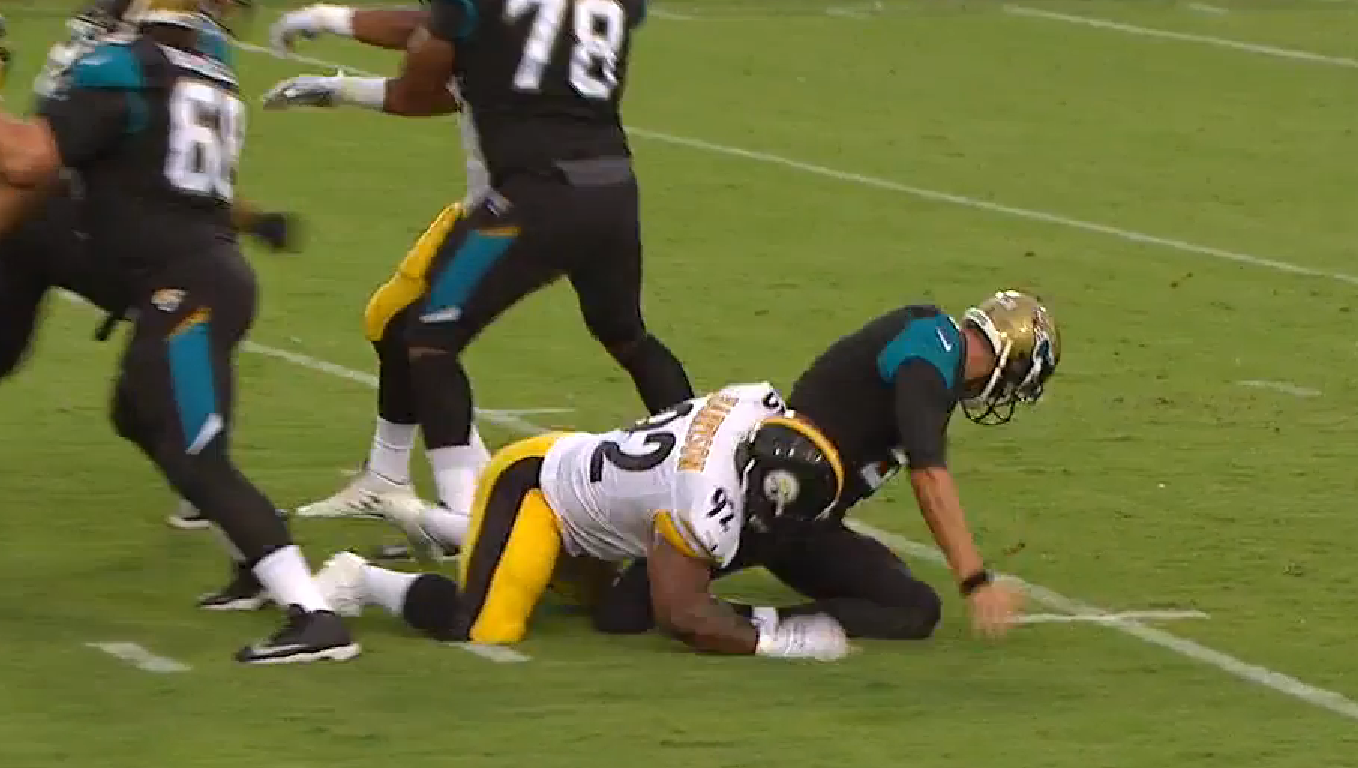 If you’re looking for a silver lining today after watching the Pittsburgh Steelers suffer a gut-wrenching loss, consider this: the defense has racked up a total of 14 sacks through the first four games, including two games of five sacks apiece.

Both of those instance occurred at home, including last night’s loss to the Ravens, of course, during which the Steelers’ pass rush was able to get to Joe Flacco five times after Baltimore’s offensive line had been doing a good job of keeping him upright thus far in the season.

The first sack came on the Ravens’ opening drive, when second-year defensive end Stephon Tuitt was able to get to Flacco on third and 10 to force the Ravens to punt from its own 35-yard line. The offense responded with a field goal drive.

Early in the second quarter, inside linebacker Lawrence Timmons was credited with a sack after tripping up Flacco as he attempted to scramble out of the pocket as the protection broke down and his receivers were unable to get open down the field, though technically the sack went for zero yards.

While that sack didn’t stop the drive, Flacco did end up throwing an interception at the end of it, and Sean Spence’s sack on the first play of the Ravens’ next drive for a loss of six yards put Baltimore in such a bad spot that they ended up going three and out again on their last drive of the first half. The offense was able to get the ball back and end the half with a field goal as a result of the defense forcing that three and out.

The fourth sack came early in the second half, and it was a big one. Once again, Flacco went down as he was attempting to scramble out of the pocket. Fellow defensive end Cameron Heyward showed supreme hustle to chase down the quarterback, and he ended up batting the ball out of his grip, which the Steelers recovered and converted into seven points.

It appeared that the defense came up with the huge, game-clinching sack on fourth and 10 late in the game with a three-point lead and 2:04 remaining on the clock as well, but we know at this point how that worked out.

After forcing three straight incompletions, Flacco found nobody open on fourth down, and realized that there was no sense making a throw that would not convert a first down at that point, but James Harrison ultimately got off his block to record his first sack of the season, turning the ball over on downs for the offense.

As of this moment, Pittsburgh is on pace to record 56 sacks. Though it’s highly improbable that they are able to keep up that pace, they still figure to post a significant upgrade over the past several seasons, all of which concluded with sack totals hovering at or below the mid-30s.

In total, the Steelers have posted 5.5 sacks from their defensive line, with 3.5 from Tuitt for the team lead and two from Heyward. Will Allen has one sack from a safety blitz, while the remaining 7.5 sacks have come courtesy of the linebackers. Specifically, Bud Dupree leads that group with two, followed by Arthur Moats with 1.5, then Timmons, Harrison, and Ryan Shazier with one apiece.