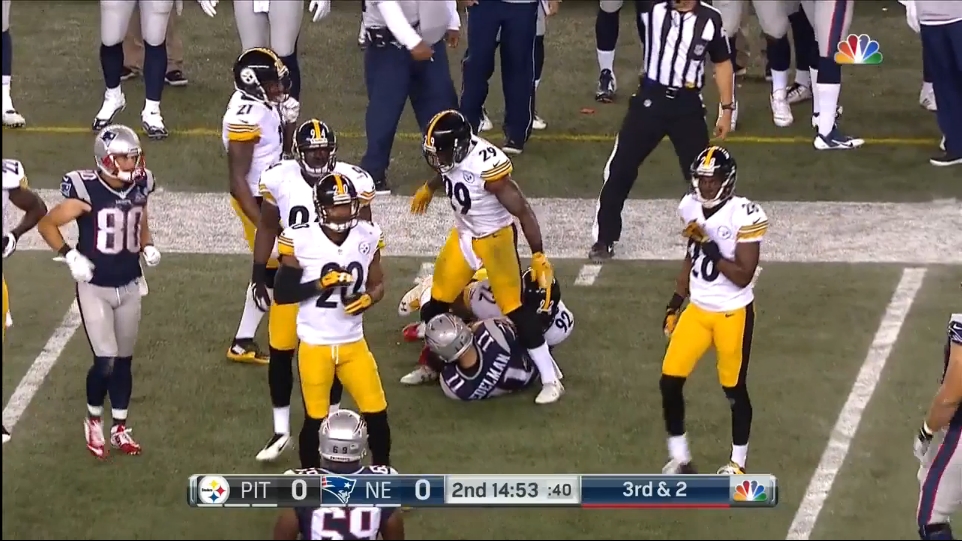 Hard worker. Great story. A player you root for.

Those are all facts to describe Shamarko Thomas.

His future in Pittsburgh, however, is a much more uncertain.

Through the first quarter of the season, Thomas has logged four defensive snaps. They all came in Week One when the Steelers tried out their dime package to middling results. Last week, Robert Golden was the first player off the bench when Mike Mitchell and Will Allen briefly missed time. Thomas was left on the bench.

I said it aloud immediately after Thursday’s loss and even with some time to calm down and reflect, the thought still rattles in my brain. Shamarko Thomas will never play another defensive snap for the Steelers again.

In 2015, it would seem the only way Thomas gets back on the field are injuries to Allen and Mitchell. Anything is possible, but that would of course be born out of necessity, not a desire to play him.

Thomas was coddled in his first two years in the league. Anyone acting as the understudy to a slam-dunk Hall of Famer like Troy Polamalu was going to have to accept that role. But he was the heir and 2015 was supposed to be his year. The team took the training wheels off, giving Thomas the starting gig in training camp and soaking up as many reps as he could in the preseason.

Mistakes in coverage, and implied by Mike Tomlin, issues with Thomas “above the neck” put him on the bench before opening weekend. A clear message of a lack of trust in Thomas’ ability to play assignment sound football and do what is most important to the position – keep everything in front of you. Tomlin chose to go with the less athletic, less physical safety but the one with the higher IQ.

It’s trust that is hard to earn back and time isn’t on Thomas’ side anymore. The excuses are no longer on the table – being a rookie, dealing with injury, not getting an opportunity. The only place to look is at Thomas himself. With 2016 the final year of his contract, even though thinking about this is a light year away, he will likely enter training camp squarely on the bubble.

The return on investment is a far cry from what the Steelers hoped for when the team dealt a third round pick to move up into the fourth to take Thomas. Whiffs during that section of the draft happen all the time, though it adds to the front office’s systemic inability to evaluate defensive backs, but what was riding on Thomas makes the miss sting more. It leaves the future of the position in flux. At 33, Will Allen could be in his last year in the league. Golden, despite being ostensibly named the backup safety, is still best as a core special teamer and not someone that will be considered for a future starting role.

There is zero doubt in my mind Thomas will work his tail off to change the tide of his career. Maybe he’ll prove me wrong. I want to be wrong. I want him to contribute heavily to the team. But the time for feel-good stories are long behind us. It’s about results. And Thomas’ are not promising.