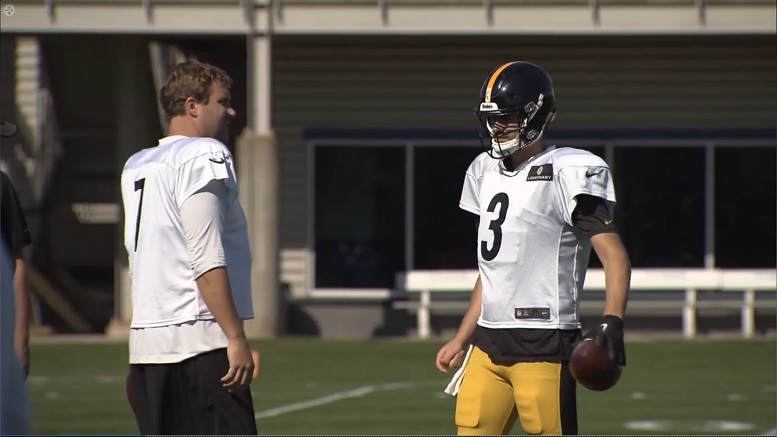 The Pittsburgh Steelers still have a few more days to decide who their starting quarterback will be Sunday against the Kansas City Chiefs and while Landry Jones is obviously favored by many to get the nod, I’m not so sure you can rule out the possibility of Ben Roethlisberger at least dressing for that game just yet.

While Roethlisberger has been listed as limited on the two injury reports so far this week, it sounds like he’s still getting a fair amount of reps in practice just the same. Following Thursday’s practice, Roethlisberger said he did “probably a little more” on Thursday than he did on Wednesday, according to Mike Prisuta of DVE Radio.

“I did the same amount of the show team but did more of the (Steelers) offense,” Roethlisberger said.

Prisuta also reports that Roethlisberger said after Thursday’s practice that he felt “fine” after his limited work on Wednesday and that his knee didn’t swell up.

Roethlisberger said he expects head coach Mike Tomlin to look at the practice tape and then talk to him about how he feels after Friday’s practice.

Steelers offensive coordinator Todd Haley said Thursday during his weekly session with the media that he’s going “full-speed ahead” with Jones as the starter until told otherwise. Jones, as you would expect, is currently getting the bulk of the reps in practice this week as Mike Vick has yet to practice because of the hamstring injury he suffered this past Sunday.

Come Saturday evening, we should have a little more clarity as to whether or not Roethlisberger will at least dress for Sunday’s game against the Chiefs as by that time the team will have had to promote Tyler Murphy to the 53 man roster from the practice squad so that he can dress for Sunday’s game. If that move winds up not being made, then odds are good that Roethlisberger will dress on Sunday and at worse serve as the backup to Jones.

When the Steelers Friday injury report is released, I would expect Roethlisberger to be listed as questionable based on what we know right now. If, however, he’s listed as doubtful or out, you can go ahead and count on Murphy being promoted on Saturday and Jones starting on Sunday.

No, I have no idea how this will work out and one would think that the Chiefs are also currently having to prepare for both Jones and Roethlisberger.

Sunday will mark four weeks exactly since Roethlisberger sprained his left MCL against the St. Louis Rams. The veteran quarterback has never missed more than three games in a row due to an injury.

OC Haley said QB Jones is getting "a lot of reps. You saw Ben getting some reps. We're full-speed ahead with Landry until told otherwise."

Ben said he did "probably a little more" today (than Wed). "I did the same amount of the show team but did more of the (Steelers') offense."

Ben: "I guess Mike (Tomlin) is going to look at the film and see what he thinks. Tomorrow he'll ask me, 'How'd your knee do over night?'"

More Ben: "I'll tell him (Mike Tomlin) how I feel and he'll probably look at the film and determine off the film what he's going to do."

More Ben on how he felt after Wednesday's practice heading into today: "I felt fine, I felt normal; knee didn't swell up, so I felt good."