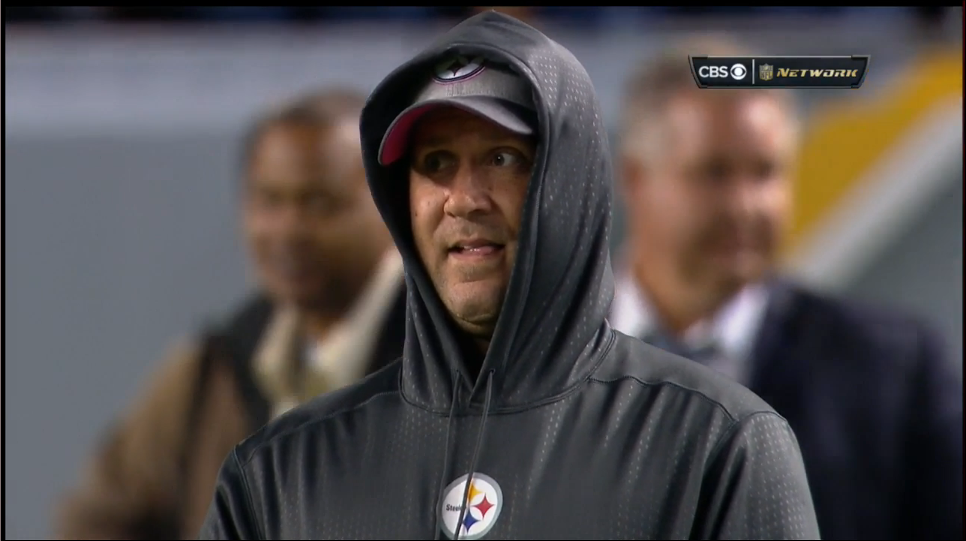 Though I think after this game, we all feel like losers. Or nauseous. Probably both.

Also, that shot of Ben Roethlisberger is how everyone looked after the loss. So I included it.

Le’Veon Bell: 129 yards against statistically one of the best run defenses in the NFL. On a day where Mike Vick was the starting QB. His yards were hard-earned and he nearly won the game, a broken tackle shy of racing to the end zone in overtime. He led the team in rushing yards and receptions. A talent like that is special.

Now I wait for the comments about not using him on 4th down. We’ll talk about that throughout the week. But you already know that.

Stephon Tuitt & Cameron Heyward: Heyward already is an All-Star while Tuitt is quickly ascending there. According to ESPN, Tuitt is being credited for 10 solo tackles which has to be a record for a Steelers’ defensive lineman. The two combined for two sacks, four tackles for loss, and three QB hits. Heyward played on a gimpy leg in the second half. Gutsy, gutsy performance. Had the Pittsburgh Steelers won, they would have been worthy of a game ball.

Ross Cockrell: He bewildered most of us by leaping over Brandon Boykin but the former Duke Blue Devil made plays tonight. He picked off Joe Flacco and recovered a fumble, somehow keeping his feet in bounds. It was a strong game by a player who has given the team some very quality snaps in three games.

Sean Spence: There were some ugly plays that will show up on tape but his tackle on the Baltimore Ravens fake field goal was huge at the time. He finished the game with eight tackles and a sack. Still has to work on his initial step. Too susceptible to getting out of position.

Keith Butler: Give credit to him all game. Not only for limiting the Ravens offense on the scoreboard, but Butler was incredibly creative and aggressive, showing shades of Dick LeBeau. His corner and safety blitzes went a long way to bring Flacco down five times. After a rocky start, Butler is starting to find his groove.

Josh Scobee: I’d write more, but I only plan to talk about players who will be here next week.

Jordan Berry: After stringing together a couple of big weeks, Berry put together a clunker tonight. He averaged 39.8 yards on six punts, with three of them well under 40 yards. The leg he’s proven to have simply wasn’t there tonight and helped set up good field position for the Ravens generally anemic offense.

4th down playcalling: A lot of rage is being sent in this direction. I rarely get on a coaches case, anyone who reads my stuff knows that, but it’s hard to defend either 4th down call. I’m not demanding run it up the gut with Bell on both. But a sweep to the boundary and a rhythmic out route to the right, the field side, for a left-handed QB are calls Todd Haley has to wish he had back. There were execution issues, there always are on failed calls, but that isn’t putting players in position to succeed.

Jarvis Jones: He was just invisible and frankly, I’m not sure how many snaps he even saw tonight. Just one tackle officially. The Steelers drafted a player they’d hope would become an impact pass rusher. And so far, have gotten very little return on their investment.

Cam Thomas: When we chart the game, we’ll get a clearer picture, but the Ravens seemed to have a lot of success running their zone schemes with Thomas on the field, a player who just struggles to move laterally. The team has two rock stars at DE in Heyward and Tuitt. But behind that? They’re chasing scraps.

Tackling: I’ll keep placing it on here until it gets cleaned up. You can’t ask for perfection but the team was again sloppy tonight, highlighted in the Ravens’ first touchdown when wide receiver Michael Campanaro was dead to rights. He shook Arhtur Moats, blew past Will Allen, and scored. Steelers beat themselves in a lot of ways tonight.

Shamarko Thomas: Like Jarvis, Thomas is just having trouble seeing the field. Robert Golden playing over him when Will Allen went down speaks to the lack of trust of putting Thomas in during a big-game situation. I’m trying to stay clam after the loss, and not go into a knee-jerk mindset, but I don’t think Thomas ever plays another defensive snap in Pittsburgh again.