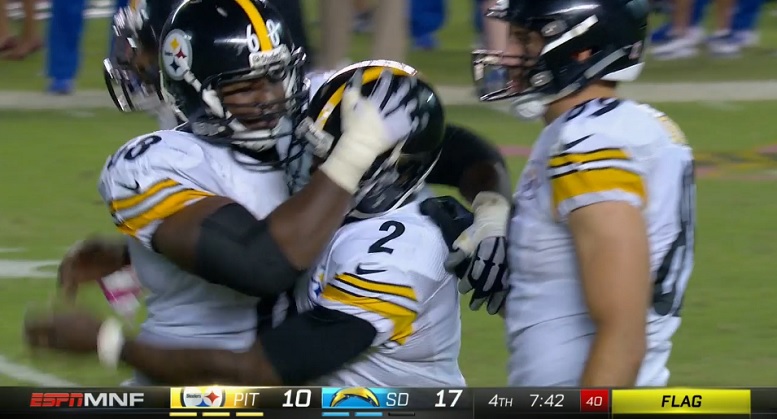 Le’Veon Bell: Hard not to start this list off with the guy who fought his way into the end zone to score the game-winning touchdown. Bell put on a sizzle reel of phenomenal runs tonight, capped by his dive into the end zone as time expired, leaping over a fellow Steeler to dive past the goal line. He finished the day with 111 yards and that touchdown, acting as the only source of offense for a large chunk of the game. An incredible performance by the best running back in the league.

Cam Heyward/Stephon Tuitt: Have to name both of them. The San Diego Chargers’ offensive line was as battered as one can be but these two took full advantage, collapsing the pocket throughout the game. The box score won’t reflect it with a combined five tackles but they were as dominant as ever.

Jarvis Jones: Jones has been rightfully scrutinized for his inability to get after the QB or produce big plays. But he did both tonight, showing his strength on a bull rush and forcing a fumble later in the game. There’s no telling what the rest of the season holds for him, but tonight will likely go down as one of his better performances.

Antwon Blake: There was a lot of bad from Blake tonight, notably with several missed tackles. But it’s hard to not put a guy who had a 70 yard INT return for a touchdown in a game where the offenses struggled to put up points. That was the type of splash play this team needed and Blake delivered.

Markus Wheaton: Similar to Blake, Wheaton only came to life for one play tonight. But it was a big one, burning Brandon Flowers on a double-move for a 72 yard touchdown. He has had a quiet start to the year but has played well and produced splash plays when his number is called upon. He even had to play defensive back tonight, breaking up one near INT from Vick.

Mike Vick: Was it a great game? No. Was it a good one? Probably not. Vick looked terrible for three quarters and had fans wishing to put Landry Jones (gasp!) into the game. But he’s a veteran with a short-term memory, perhaps the biggest reason why you would keep him in the game. He delivered in the games biggest moment, with so much on the line, for an 80 yard drive. It included one of his famous scrambles and a bullet to Heath Miller to the one. It wasn’t pretty but Vick rose to the game’s biggest moment. And that’s all you can ask for.

Chris Boswell: Much love to the kicker. Steelers’ fans needed to see this one. Just one field goal but it was a 47 yarder and he was perfect on his extra points. Start sculpting the Hall of Fame bust…

Cody Wallace: He may be a proctologist in his spare time but he’s not much of a pass protector. The tape will help clear up his woes but he struggled in stunt recognition and got eaten alive up the middle. No one expected him to be Maurkice Pouncey but there was frankly too much optimism he could replace him reasonably well. As I’ve said, he gets exposed over time, and that was again on display tonight.

Ross Cockrell: It’s not easy being a cornerback out on an island. Some of the criticism is unfair. But he struggled in coverage, including giving up a 32 yard gain to Malcom Floyd down the middle in the second half. He was also called for pass interference on Keenan Allen earlier in the game. Not the worst game ever but a far cry from those who were singing his praises last week.

Special Teams Penalties: Can’t put it on any single player. But there were four penalties on the team’s first four punt returns. Reminded me of how awful the team was in that respect for the first quarter of the season last year. Jordan Todman’s block in the back was notable, negating an Antonio Brown 35 yard return.

Will Allen: I don’t like adding insult to literal injury after Allen left with an ankle injury. He’s a good dude and has given the Steelers quality snaps before. But it was a rough game in all areas. Struggled to tackle and let Antonio Gates have an uncontested touchdown on the Chargers’ first drive. It’s a tough play for a safety to make, and to be fair, Robert Golden didn’t fair much better later in the game (it was the exact same route concept, flat/corner) but Allen showed his age catching up to him. Steelers can’t feel great about whoever is going to play opposite of Mike Mitchell.