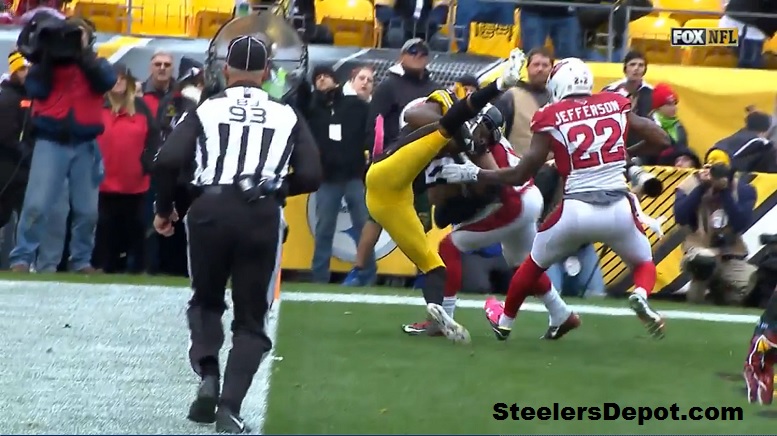 The Pittsburgh Steelers suffered a deflating 23-13 loss today courtesy of the Kansas City Chiefs, dropping them to 4-3 on the season and three games back in the loss column to the division-leading Cincinnati Bengals, who are up next on the docket.

It’s difficult to find much good after a tough loss, but there are always individual aspects to every game that are worth exploring, and it certainly should not go without mentioning that second-year wide receiver Martavis Bryant is continuing an excellent start to his career, especially with regards to production where it matters most: in the end zone.

While Bryant’s been unable to get on the first in the early portions of his first two seasons, he has been highly efficient scoring touchdowns once he is able to put everything else aside and play ball.

In part fueled by an injury in the preseason finale, Bryant was on the bench for the first six games of his rookie season. He was activated for the first time of his career for the Steelers’ seventh game, in which he caught his first pass for a 35-yard touchdown.

The 6’4” speedster proceeded to catch two touchdowns apiece in each of his next two games, for a total of five touchdowns in his first three games. He added three more touchdowns over the span of his last six regular season games, including two long touchdowns.

Bryant also scored the only touchdown for the Steelers in their playoff loss to the Ravens that year.

In 2015, the former fourth-round draft pick spent the first four games of the season on the suspended list for having failed multiple drug tests in his first year in the league. He ended up injuring his shoulder in his first practice returning from suspension, which resulted in him missing a fifth game.

Finally back on the field for the Steelers’ sixth game, Bryant is the only player for the Steelers to score a touchdown over the past two weeks. He picked up two touchdowns in his first game back, including a game-sealing 88-yard touchdown, about 80 yards or so of which was pure, glorious yards after the catch.

Today, he once again hauled in the Steelers’ only touchdown, a score that as the time brought the team back in the game, making it a six-point deficit. Pittsburgh whittled the lead down to three before giving it all away, ultimately losing 23-13.

Bryant’s regular season career spans just 12 games, but he has already amassed 11 touchdown receptions in that span, which is among the most prolific starts to a career in league history. Just four players before him had reached 10 touchdowns in less games. He is the sixth receiver in NFL history to reach 11 touchdowns in 12 games.

Including the postseason, the talented young receiver has 12 touchdown receptions in 13 meaningful games. With Ben Roethlisberger hopefully returning next week, it may be a safe bet to predict that there are more touchdown passes in his immediate future, after snagging three of them from Landry Jones.