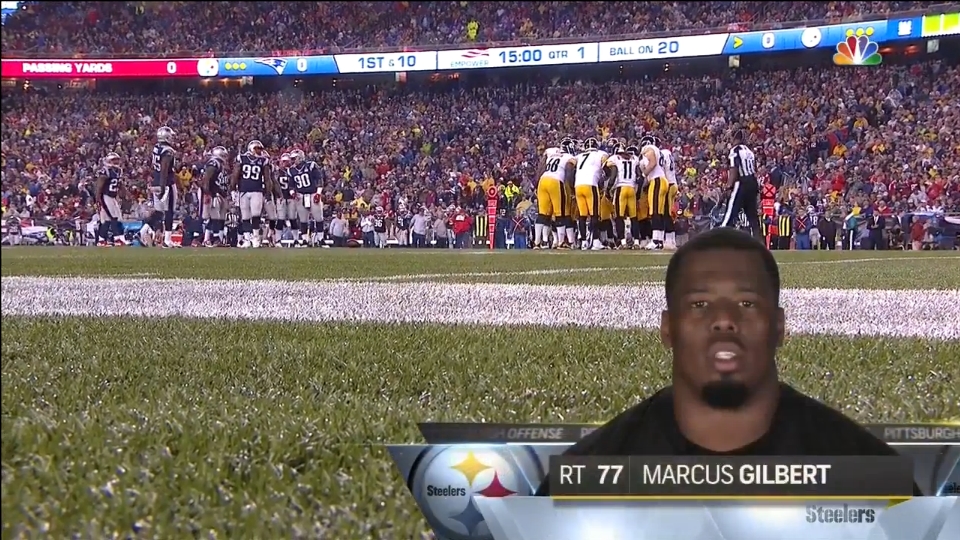 Marcus Gilbert is having the season Kelvin Beachum was supposed to have. I’ll give you a second to pinch yourself and let that reality sink in.

Maybe he’s worth that 30 million contract after all?

Gilbert is the only Pittsburgh Steelers’ lineman not to allow a sack this season. He’s only been flagged for one penalty, too, also making him the cleanest lineman of the starting five. Going back through my sack breakdowns, over his last ten games, he’s only given up one sack. That’s quietly a nice little streak he has going on.

Don’t believe the idea that Gilbert is facing “easier” competition because he plays on the right side, either. He took on Aaron Lynch, leading the San Francisco 49ers in sacks with three, in Week Two. No one on that St. Louis Rams’ front is easy. And last week, in his toughest matchup, he held Elvis Dumervil sackless (his sack wasn’t Gilbert’s fault). Dumveril is typically his kryptonite. And Thursday, Gilbert got his revenge.

The tape isn’t always the prettiest, he still has a tendency to lean forward and I’d like to see him carry his hands higher, but if you’re Mike Munchak – or a Steelers’ quarterback – you’re primarily concerned with results. So far, so good.

It’s a far cry from where Gilbert was this far into last season. Through four weeks in 2014, he allowed three sacks. Through six, he gave up four. Unacceptable performances for a player whose team made him a top-six paid right tackle.

His performance is heightened until Ben Roethlisberger returns, Gilbert serving as the blindside tackle for the left-handed Mike Vick. Should Roethlisberger not return before the Kansas City Chiefs game in three weeks, going up against the potent Justin Houston will be one of the top matchups to watch.

Gilbert has always had the talent. The rare blend of size and length but a leaner body type that allows him to function in space. He seems to finally putting it together. Credit unquestionably goes to Munchak, someone who should receive a tip of the hat to anything involving the offensive line, but also to Gilbert for being receptive to learning and growing. It’s the distinguishing characteristic between him and Mike Adams, who has never been able to overcome his technical bad habits.

There’s still 12 games left. Gilbert is unlikely to play this clean for the rest of the way. He’ll have his woes, just as any player incurs over the course of the year. But he’s playing at the level the team invested him for. And at a time when the offense will rely on its front five more than ever,