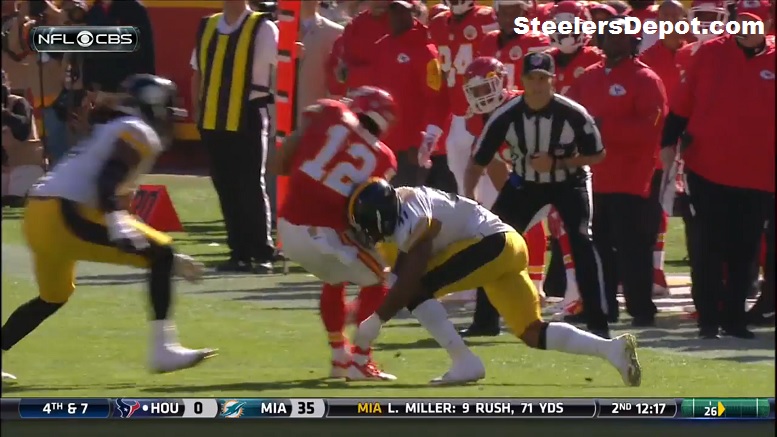 One week after the Pittsburgh Steelers defense had a solid game of tackling against the Arizona Cardinals they reverted back to missing several of them in their Sunday road loss to the Kansas City Chiefs.

During a recent interview on Steelers Nation Radio with Missi Matthews, Steelers defensive coordinator Keith Butler talked about the tackling problems his unit had against the Chiefs and more importantly, what needs to be done in order to improve in that area.

“Well, sometimes things just happen and you miss tackles but we got in a situation where we had one caught in the flat and we missed about three tackles and the wide receiver ran down the sideline for a few yards and they wound up getting a score out of it, Butler said. “But we got to make them go up by threes, we can’t make them go up by sevens.

“So we got to do a little bit better. We got to work a bit harder at it, we worked at it the past couple of weeks, probably could work at it a little bit harder and I think everybody will tell you out there. Sometimes we don’t have enough time to do it as coaches with the players and the players have to do it in their own time after practice and we got to dedicate more time to it.”

Due to practice time limitations, the Steelers coaches simply don’t have time during the week to dedicate to tackling drills. In other words, as Butler points out, it’s on the players to improve on their own after practice is over. Whether or not most of them take it upon themselves to put in that extra work is unknown, however.

Outside of their win over the Cardinals, the Steelers defense has been consistently below-the-line when it comes to tackling this season. That skill set better improve this weekend if they intend on beating the undefeated Cincinnati Bengals at Heinz Field.

“We didn’t tackle as well as the week before and it hurt us a little bit,” Butler said.