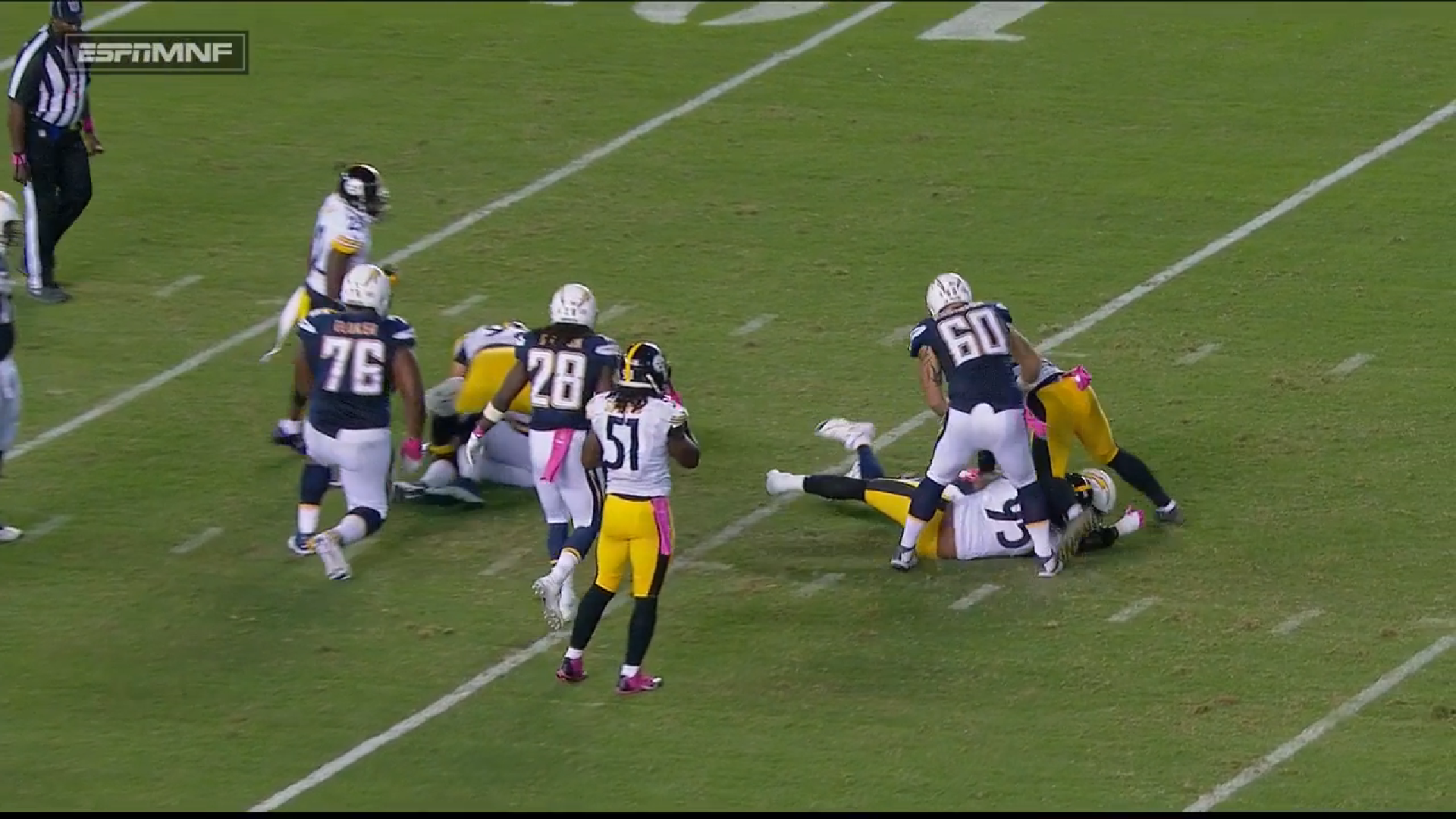 Lost amid the hysteria surrounding the end of last night’s unlikely 24-20 victory by the Pittsburgh Steelers is the fact that third-year outside linebacker Jarvis Jones quietly had a nice game for himself when he was on the field, having arguably his most impactful night yet, or perhaps second, after the game in which he was injured in 2014.

All told, Jones registered five total tackles, forced a fumble that the Steelers recovered, and notched his first sack of the season that put the Chargers in a third and long situation that they were unable to convert.

In fact, leading up to his sack, which came late in the first half, Jones had already been putting together a nice day as a pass rusher, generating some pressure at a solid rate while he was in the game, showing, in particular, improved strength as he worked the bull rush to penetrate the pocket.

It was the bull rush that produced his sack, in fact, though it came on an interior rush, stunting inside and driving the center back into Philip Rivers. Once Jones got a hold of the quarterback, the pass rusher pulled him down to the ground as the lineman still attempted to block him. It would be fair to say that this was his most impressive of four career sacks.

On the Steelers’ opening drive, Jones was forced to make a tackle on running back Danny Woodhead 30 yards down the field after the left side of the defense failed to contain the simple screen pass, but it did give the former first-round pick the opportunity to show some hustle.

There were other opportunities for Jones to rush the passer, on which initial impressions it seems that he did well. He was able to get around the left tackle on the final play of the Chargers’ opening drive, though not quickly enough to stop the touchdown.

He also put together a pair of nice rushes on the Chargers’ third drive, after giving way to James Harrison for a possession. He got a hand on Rivers on third down as he looked down the field and fired inaccurately to his target.

Of course, it can’t be ignored that Jones was going up against a backup left tackle for the entire game, and by the end it was the third-string tackle, in fact. But initial observations, before we get into more extensive work breaking down the game, were certainly positive, and he played as he should have against that level of competition.

He missed a tackle or two, and got hammered on a potential blindside block chasing down a screen pass, as well. He is going to make mistakes on occasion that cause one to groan, especially one inclined to linger on his draft status. But he turned in a performance on the road last night to build upon in the future.