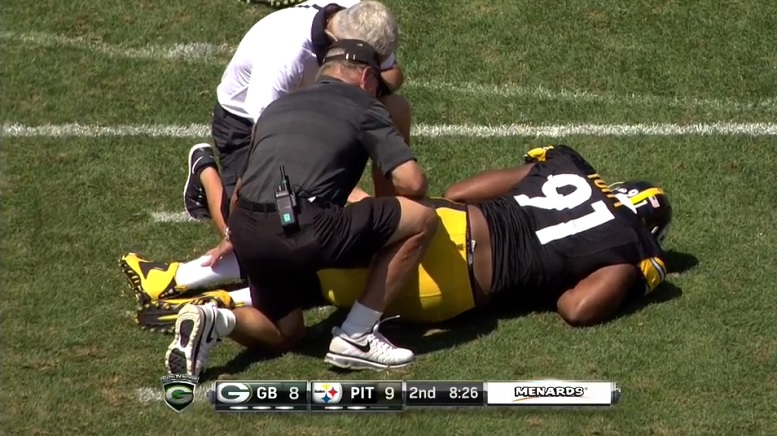 It was obvious in Sundays’ 23-13 loss to the Kansas City Chiefs that the Pittsburgh Steelers missed having starting defensive end Stephon Tuitt on the field. On Monday, Tuitt, who is currently nursing a knee sprain, was asked about the status of his injury

“We’re going to take it a day at a time and were going to make sure that we do the best decision for all of us,” said Tuitt, who currently leads the team in sacks.

Tuitt was later asked if he’s been told what grade of sprain that he suffered and he was vague in his answer.

“Not that bad,” said Tuitt. “Just being precautious because it’s an area of the body where you want to be precautious.”

Tuitt did admit that it was tough watching his teammates play without him Sunday against the Chiefs and that it was tempting to play injured.

“Most definitely,” said Tuitt, who was drafted by the Steelers in the second round of the 2014 NFL Draft out of Notre Dame. “To sit down on the couch and watch my teammates go to war without me, that’s the hardest thing for me.”

The Steelers have a big game this coming Sunday against the Cincinnati Bengals, who are coming off of their bye and Tuitt says he’s well aware of that. With that being said, the Steelers defensive end sure doesn’t sound confident that he’ll make it back for that game.

Head coach Mike Tomlin will likely offer an update of some kind Tuitt’s status during his Tuesday press conference, but I doubt well get much clarity on whether or not he’ll play Sunday against the Bengals.

Should Tuitt be unable to play for a second straight week, veteran reserve Cam Thomas will likely start again in his place with rookie L.T. Walton and Daniel McCullers again seeing some playing time in the defensive line rotation.