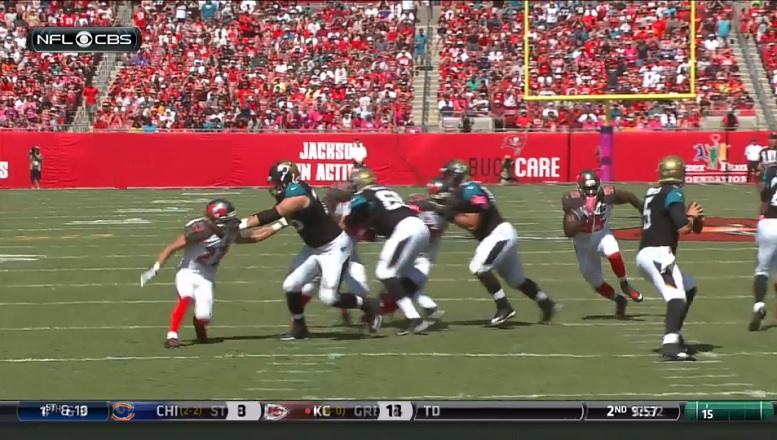 If you happened to watch the Sunday game between the Tampa Bay Buccaneers and the Jacksonville Jaguars, you probably saw a familiar defensive face make an impact in the first half of that contest.

Buccaneers defensive end Howard Jones made his NFL debut on Sunday and the former Pittsburgh Steelers undrafted free agent outside linebacker registered two sacks in the first half.

“How about Howard?” Buccaneers head coach Lovie Smith said after the game. “His first true action, you move up… Howard has a lot of ability. He’s as fast as some of the receivers.” Smith continued, “We’re looking at him. You can never have too many rushers.”

Jones, who was originally signed by the Steelers in 2014 out of Shepherd, spent his rookie season on the team’s practice squad. This past offseason, he again failed to make the Steelers 53 man roster out of training camp.

Once he was waived during the final round of cuts, Jones chose to become a member of the Buccaneers practice squad as the money they offered him was extraordinarily high. In fact, Jones was the highest paid practice squad player in the NFL ($25,588/week) prior to his recent promotion to the Buccaneers 53 man roster.

Jones played the 4-3 defensive end position in college and it appears as though that’s where he fits best at the NFL level. He played 18 snaps on Sunday against the Jaguars. Below are the gifs of his two Sunday sacks.