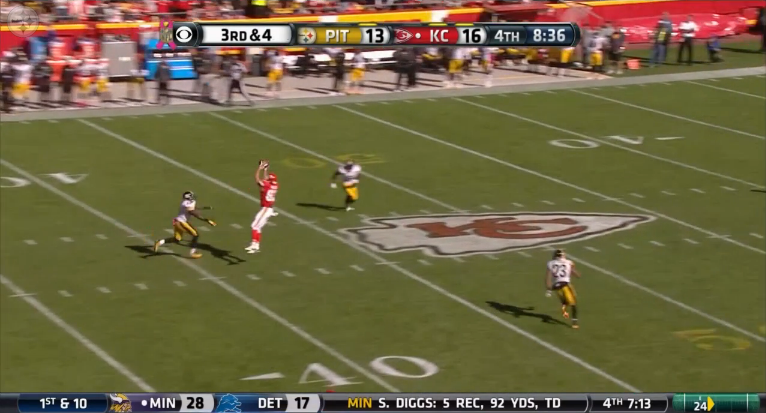 Without Jeremy Maclin and Jamaal Charles, everyone watching today’s game knew the Kansas City Chiefs’ top target was one man – Travis Kelce. Despite the Pittsburgh Steelers being able to keep him out of the end zone, they admit they could have done a better job containing him.

“When a tight end is their favorite receiver, we gotta make sure we minimize him getting the ball,” Bud Dupree told reporters following their 23-13 loss Sunday afternoon.

“We started to do that too late. We started to chip him a little too late after he got into his rhythm. We should have done that from the start. We just have to see that while we’re in the game.”

Kelce finished the day with five receptions for 77 yards. His biggest play came mid-way in the fourth quarter, running down the seam to high point a 3rd and 4 pass for a gain of 26. The Chiefs would later score in the drive, extending their lead 23-13.

It gave the ball back to the Steelers down two possessions and only five minutes left. Landry Jones would be sacked and fumble on that drive, effectively ending the game.

The Steelers have faced some of the league’s best tight ends this season but it’s no secret the Steelers have had trouble stopping them. Rob Gronkowski caught three touchdowns in Week One and Antonio Gates caught two later in the year.

The road doesn’t get any easier starting with Tyler Eifert on Sunday. Eifert has caught 28 passes for 342 yards and six touchdowns in 2015, quickly becoming one of the best players at his position. The Steelers will also square off against the Cleveland Browns’ Gary Barnidge. He’s been one of the real surprise stories of the league, going over 100 yards in three of his last six games. That included a six catch, 101 yard performance today in the Browns’ 24-6 loss to the St. Louis Rams.