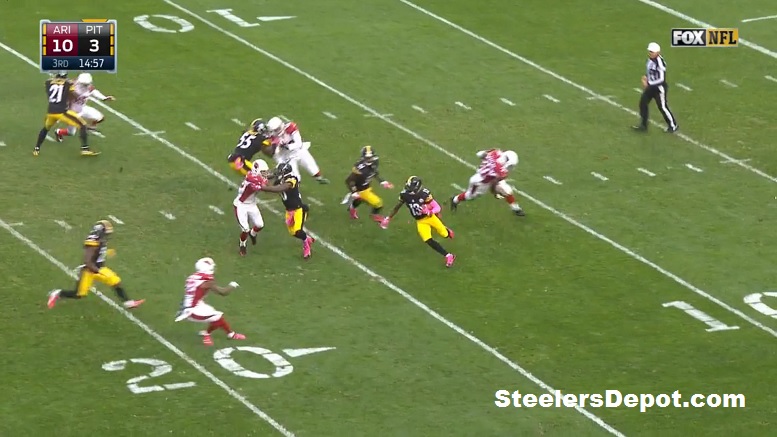 While he hasn’t provided many highlights so far this season, Pittsburgh Steelers kick returner Dri Archer did almost break one for a score Sunday against the Arizona Cardinals to start the second half.

During a Thursday interview on Steelers Nation Radio, special teams coach Danny Smith made sure to reference Archer’s long return while recapping his units’ play against the Cardinals.

“I thought the play that Dri Archer made to start the second half, I wanted 6 points on that particular play, it was set to do there if we finished better,” said Smith. “It should’ve been six points, but we delivered the ball to our offense on the 39-yard-line to start the second half which is outstanding and we need to continue to do that. That’s our part in this operation, to give our offense good field position and I thought Dri did that to open up the half which I thought was a big play.”

Bob Labriola then asked Smith to talk a little about the individual growth that Archer has made this season when it comes to his ability to return kicks.

“We spent a lot of time in this offseason, we spent a lot of time during the preseason, we spend a lot more time watching film,” said Smith. “It’s a normal maturation process, to be quite honest with you. Guys come out of college that are just fast and they just run. Well, there’s a lot of fast guys and when you got a field that’s a certain shape, you run out of room and you got to set people up, and he’s done a better job at that setting people up and understands things.

“He understands the return is not just about his speed, because there’s a lot of speed in this league. So he’s improved immensely from a standpoint of knowing what he’s got, knowing when to set stuff up, knowing his bursts, knowing patience, knowing where the key blocks are coming from, or where they’re going to be set up”

So far this season, Archer has returned just 8 total kickoffs for 204 yards with a long a 35. However, with the colder weather quickly approaching, one would expect more opportunities are forthcoming. The Steelers and Smith obviously haven’t given up on their former third-round draft pick, so you might as well get used to him being back there on kickoffs for the remainder of the season.