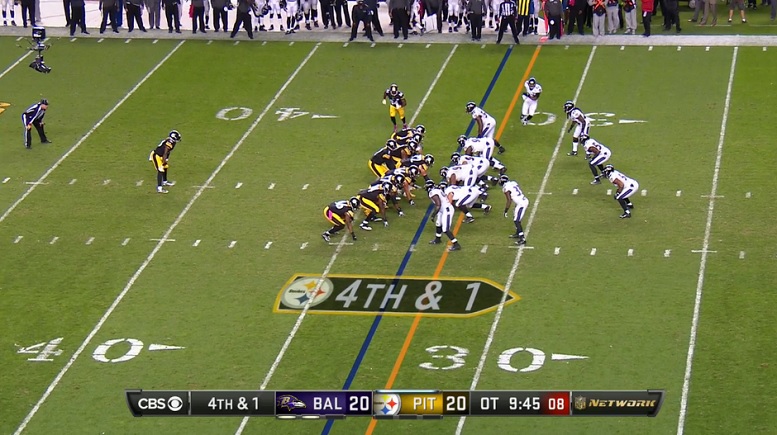 While Pittsburgh Steelers kicker Josh Scobee certainly deserves a lot of the blame for the team’s 23-20 loss Thursday night to the Baltimore Ravens, the coaching staff certainly should have several fingers pointed at them as well.

While I certainly understand the decision by Mike Tomlin to go for it on 4th and short on two separate occasions in overtime, I do blame him and Todd Haley for failing to put the ball in the hands of the league’s best running back, Le’Veon Bell.

With 12:41 left in overtime, the Steelers passed on 3rd down and 2 from the Ravens 39 yard-line. On that play, the Steelers offense had the Ravens spread out with their 11 personnel grouping on the field and thus the opposing defense only had six men in the box. If he had the opportunity to do so, Vick should’ve checked to a run to Bell instead of a quick slant to the right to wide receiver Antonio Brown.

After Vick’s throw to Brown was off target, the Steelers called timeout. It was obvious at that point that Tomlin wasn’t even thinking about punting in that situation. On 4th and 2, the Steelers rolled out their heavy personnel package complete with tackle Alejandro Villanueva lined up on the right by himself as an eligible wide receiver on the wide side of the field. The play call? A designed run by Vick around left end to the short side of the field. The Ravens easily sniffed it out and the football was turned over on downs.

Thanks to the Steelers defense forcing a three and out on the ensuing Ravens possession, Brown provided the offense with great field position thanks to a 29 yard punt return. After a first down pass from Vick to Brown was good for 17 yards, Bell gained 3 more off left tackle on first down and Vick added another 5 via a scramble on 2nd down. On 3rd down and 2, Vick completed a jump pass to Bell out of a pony backfield against an 8-man Ravens box, but safety Will Hill made a great play that resulted in a 4th and 1 for the Steelers offense.

Tomlin again decided to go for it, and instead of running Bell out of a heavy personnel package that included only one wide receiver on the field, Vick threw high and incomplete to Brown on an out route after he had motioned from the left side of the field. The ball once again went over on downs and the Ravens subsequently drove down the field for their game-winning field goal.

So to recap, four times the Steelers had an opportunity to move the chains in short yardage situations during overtime and all four times Bell wasn’t handed the football. If you aren’t going to give it to him in any of those situations, when are you? Just punt next time, Tomlin.

After the came, Tomlin was asked about not using Bell in those key situations.

The Steelers deservingly came away with the loss and it could be damaging down the road. It was a winnable game against a Ravens team who were asking to have their season end just four weeks into the season and they lost it all because they put the ball in the hands of back-up quarterback instead of the league’s best running back.

Yes, Scobee was the goat Thursday night but Tomlin and Haley were certainty both stubborn asses.