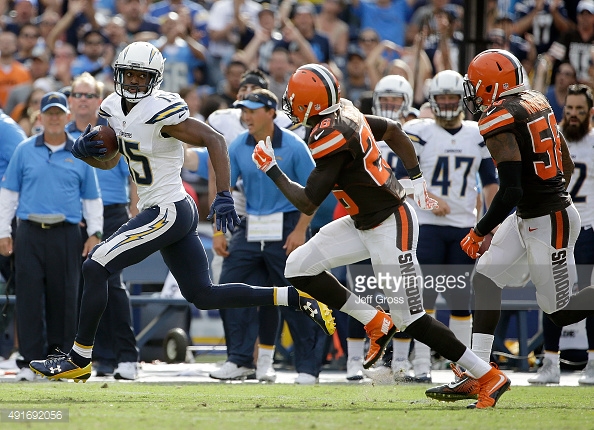 The San Diego Chargers have been battered and bruised across the board this season. But the injuries at wide receiver is opening the door for Dontrelle Inman. And he might just be the reason if the Chargers win Monday.

Stevie Johnson is looking likely to miss the game with a hamstring injury. It would open up a spot for Inman to become the #3 wide receiver. He’s a young, relative unknown, but when his number has been called, he’s always stepped up.

Inman wasn’t used until the last two weeks of 2014 but racked up respectable numbers – 12 catches for 158 yards as San Diego fought, and ultimately lost, to chase their playoff hopes. He didn’t see game action in 2015 until last week when Johnson and Malcom Floyd, who is expected to play this week, went down. Inman immediately responded and made on the game’s biggest plays, turning a 10 yard crossing route into a 68 yard gain that led to a Chargers’ touchdown in the 4th quarter, helping to vault them over the Cleveland Browns.

He’s an imposing threat at nearly 6’3 and over 200 pounds, routinely boxing out small defenders. His reliable hands makes him a trustworthy target and Philip Rivers natural gunslinger mentality means he won’t be afraid to look Inman’s way.

Keenan Allen is undeniably the bigger threat and the return of Antonio Gates will capture primetime football’s storylines. But don’t be surprised to see Inman come up with a couple crucial catches in the game’s biggest moments.