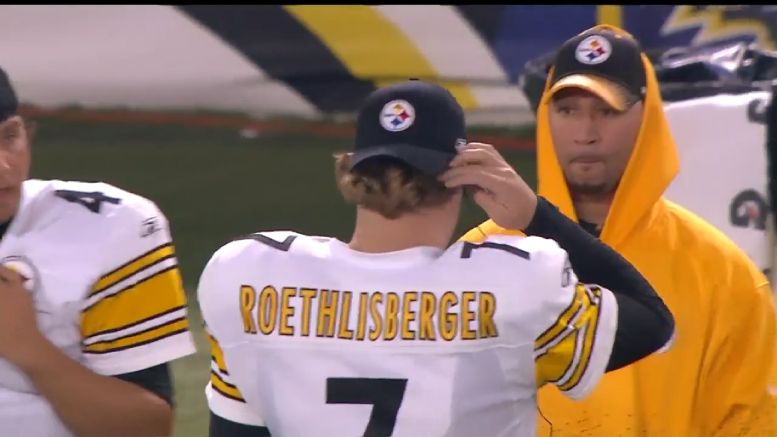 It looks as though Pittsburgh Steelers quarterback Ben Roethlisberger may be missing his fourth consecutive game tomorrow as he works his way back from an MCL sprain and bone bruise in his knee, which has kept him out since Week Three.

But that doesn’t mean that he won’t dress for the game. And he has dressed as a backup once before.

No, I’m not going all the way back to his rookie season in 2004 before he was even given the starting job. Back in 2009, after he had suffered a concussion in an overtime loss to their next opponent, the Kansas City Chiefs, Roethlisberger did not play the following week.

He chose not to play when he had the option to, and when the Steelers needed him to, for which he was criticized by teammate Hines Ward. Of course, the league’s concussion protocol was much different then.

But flash back to that time. Roethlisberger was knocked out in overtime. Charlie Batch replaced him for the last four snaps of the overtime loss, but Batch too failed to leave the game unscathed, suffering a wrist injury that effectively ended his season.

With two quarterbacks down, it was up to Dennis Dixon to start against the Baltimore Ravens. The recently signed Tyler Palko, technically, served as Dixon’s backup during that game, but Roethlisberger was in uniform on the night to serve as the emergency quarterback, meaning that if he entered the game, the other two quarterbacks could not return.

The Steelers have a similar need now—in fact, perhaps an even bigger one—but there is no more emergency quarterback. As of this moment, it is possible that there is no backup for Landry Jones, who is set to make the first start of his career after logging the first snaps of his three-year career just the week prior.

The only reason that he logged those snaps was because Mike Vick, Roethlisberger’s backup, who was signed in August to replace Bruce Gradkowski, suffered a hamstring injury early in the second half, and could not practice this week.

That means that Jones is the only healthy quarterback on the 53-man roster, but Roethlisberger did go through practice this week in a limited capacity, and seemed to feel that he threw the ball well, and with relative comfort.

Roethlisberger is officially listed as questionable for the game, but it is possible that he dresses only to serve as an emergency second quarterback in case something happens to Jones, if the Steelers coaching and training staffs feel that he can protect himself adequately in an emergency-type situation if necessary.

Otherwise, there could be just one snap standing in the way of this Pittsburgh offense, flanked by the likes of Le’Veon Bell, Antonio Brown, and Martavis Bryant, could be helmed by Tyler Murphy, a rookie undrafted free agent who has been in the process of converting to wide receiver.

I do not believe that the only way Roethlisberger dresses is if he plays. If he and the coaching staff agree that he is at a sufficient level in his recovery to serve as an emergency option, then I think that they very well might—and should—exercise that option.