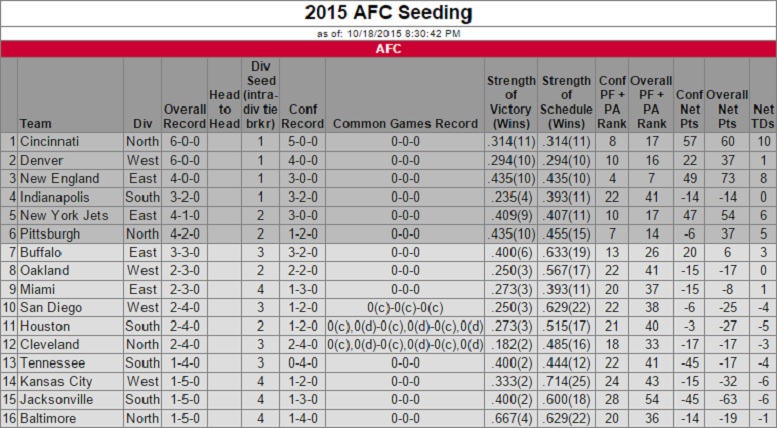 The AFC North race now looks to be a two team battle with 11 weeks to play as the Pittsburgh Steelers and Cincinnati Bengals both further distanced themselves from the other two teams on Sunday with wins.

That of course means that the Baltimore Ravens and the Cleveland Browns both lost their Week 6 games.

The Bengals remained undefeated on the season by beating the Buffalo Bills on the road 34-21 as quarterback Andy Dalton completed 22 of his 33 passes in the game for 243 yards and three touchdowns. The Bills defense also failed to sack Dalton during the contest.

Bengals wide receiver Marvin Jones caught 9 passes against the Bills for 95 yards and a score while tight end Tyler Eifert and running back Jeremy Hill had the other two touchdown receptions.

The Ravens dropped to 1-5 on the season Sunday with their 25-20 loss to the San Francisco 49ers. Ravens quarterback Joe Flacco was intercepted twice in the game on his way to completing 33 passes for 343 yards.

The Ravens defense allowed 49ers quarterback Colin Kaepernick to throw for 340 yards and two touchdowns even though he only completed 16 total passes in the game.

The Browns dropped to 2-4 on the season with their 26-23 Sunday overtime loss to the Denver Broncos. Broncos kicker Brandon McManus kicked the game-winner with 4:56 left in the extra period.

In the loss, Browns quarterback Josh McCown was 20-of-39 passing for 213 yards and two touchdowns. He did, however, throw two interceptions in the game. Browns wide receiver Travis Benjamin caught 9 passes for 117 yards in the loss.

The Steelers Sunday win over the Arizona Cardinals now puts them two games ahead of the Browns headed into week 7. Next week, the Steelers will play the Kansas City Chiefs on the road while the Browns will travel to play the St. Louis Rams.

In other Week 7 AFC North action, the Ravens will play the Cardinals on the road. The Bengals will have their bye next week and they’ll play the Steelers the following Sunday at Heinz Field.