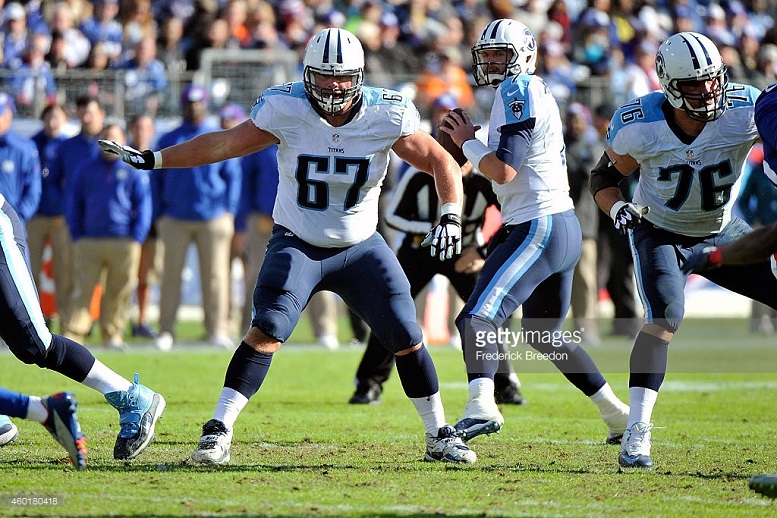 The Pittsburgh Steelers will be trimming their roster down to 53 players in the next few days and once that group of players is set, I doubt it will be the same 53 that travels with the team to play the New England Patriots Thursday night in the regular season opener.

If I were to guess, the Steelers will be on the lookout in the coming days for an offensive lineman, a running back, and a defensive lineman, as those are the three positions they could really stand to upgrade.

While I haven’t got a clue as to who they may be looking at when it comes to running backs and defensive linemen, but I do have an offensive lineman suggestion for them and that player is current Tennessee Titans guard Andy Levitre.

Levitre is scheduled to make $6.5 million in 2015 and being as he’s already lost his starting left guard job in Tennessee to Byron Bell, one would think that the Titans will be releasing him during their final round of upcoming cuts. The writing is on the wall for that to happen as Levitre did not play Thursday night in the Titans preseason finale.

Steelers offensive line coach Mike Munchak knows all about Levitre as he was the Titans head coach in 2013 when the team signed him to a six year $46.8 million free agent deal. The Oregon State product and former second-round draft pick is a left guard by trade, but he has played some center as well.

Levitre is bound to have several suitors if released by the Titans, so if the Steelers are interested in signing him, they might have to give him a two-year contract that would pay him around $3 million in 2015, including a signing bonus. He would then serve as a back-up to left guard Ramon Foster this season at that would also allow the team to part ways with Chris Hubbard. With Foster being in the final year of his current contract, Levitre could potentially be a stopgap starter at left guard in 2016.

The Steelers freed up nearly $6 million in salary cap space this past week via contract restructures and while some of that might very well be used to sign tackle Kelvin Beachum to an extension in the coming days, they should have a little left over to sign Levitre should they indeed have interest in him.