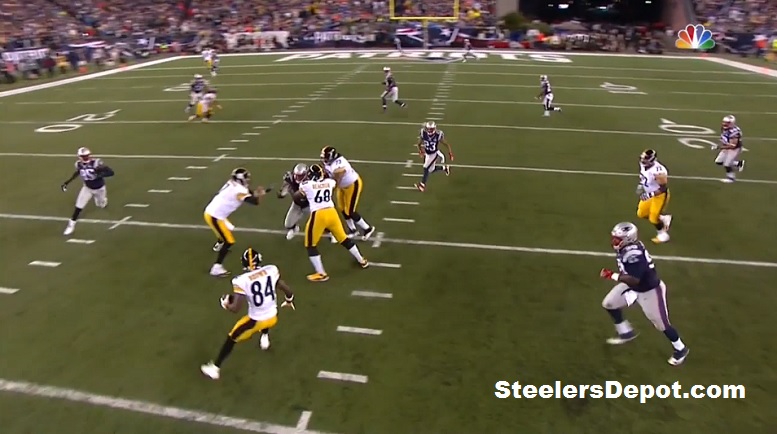 During the Pittsburgh Steelers first offensive drive Thursday night against the New England Patriots, the offense appeared to go off script when they chose to run a trick play on 1st and 10 from the Patriots 24 yard-line. The trick play in question, a double pass, resulted in wide receiver Antonio Brown being sacked for an 8-yard loss and it thwarted the drive. During his Tuesday press conference, head coach Mike Tomlin was asked about the decision to seemingly go off script with the trick play after the offense had already driven the ball right down the field on their opening drive.

“You know, it’s game situations and circumstances,” said Tomlin. “The scripts are what they are. You are off script all the time, just depending on the down and distances and situational circumstance, whether it’s at the beginning of the game or otherwise. Whether it’s on offense, defense or special teams. I could take you through a bunch of hypothetical situations that could get you off script, per se.”

So why call the trick play to Brown and what went wrong with it?

“We like putting the ball in Antonio Brown’s hands for obvious reasons,” said Tomlin. “He is a dynamic playmaker and in general a good decision maker. Obviously he didn’t make a good decision in that circumstance. They had the play covered. He had an opportunity to throw the ball away and he didn’t. We lost eight yards on the play. But it won’t stop me from having a desire to put the ball in Antonio Brown’s hands in unique ways moving forward, because he is that type of dynamic playmaker.”

Had the double pass play worked, I’m sure that several people wouldn’t have batted an eye at the decision to run it. However, being as it didn’t work and it resulted in the drive stalling and the team coming away with zero points after kicker Josh Scobee missed a 44 yard-goal attempt, it’s quite easy to question such a play-call. In fact, it really seemed to set a tone for the rest of the game.

I doubt we’ll see another trick play during an opening drive for the remainder of the season regardless of game situations and circumstances. At least I hope we don’t. That one Thursday night sure left a bad taste in our mouths and while I agree that getting the football in the hands of Brown is the right course of action, there’s more conventional ways to do it.