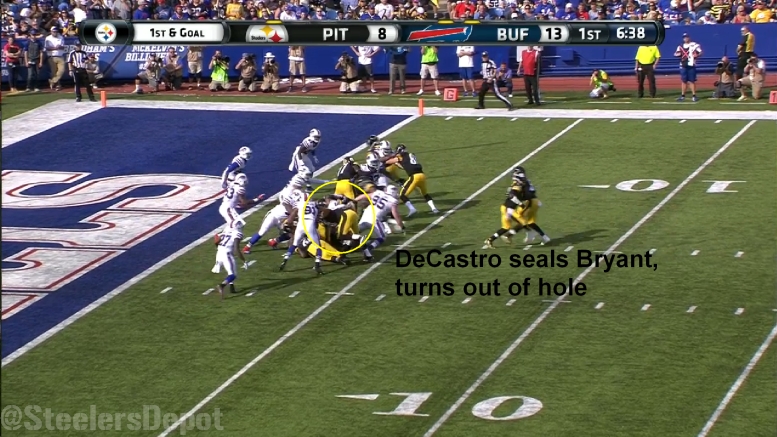 While the Pittsburgh Steelers offensive line is being tasked, once again, with going on without All-Pro center Maurkice Pouncey, at least for half of the season and likely more, they are certainly better equipped to do so than in 2013.

Not just because it happened in the middle of the preseason rather than early in the season opener, but also because this is a better line overall. And that includes former first-round guard David DeCastro, who is on the cusp of being a Pro Bowler if he can find more consistency in his game.

The fourth-year guard was the best performer on the starting line for the Steelers in the last preseason game against an impressive Bills front four. While they all had their failings in pass protection, DeCastro was a consistent performer against the run in his, and the starting line’s, handful of snaps.

The veteran lineman was responsible for the best run of the day, a 14-yard dash up the right sideline by DeAngelo Williams, providing an excellent turn-and-seal block on defensive tackle Kyle Williams, who has given the Steelers, and DeCastro, fits in years prior.

With that seal, and Antonio Brown’s block on the perimeter, Williams only had to use his quickness to hit the hole and outrun the linebackers to get into the secondary.

He finished off the drive in fine fashion as well, pulling on the goal line and ending up taking out several Bills as Williams scampered into the end zone untouched. It’s a risky proposition to pull along either goal line, but Marcus Gilbert cutting the backside lineman made it all work.

On the pull, DeCastro made first contact with the strong side linebacker, which created a log jam that also caught the middle linebacker and safety up in the wash. Of course, that’s not exactly how it was designed, but you’ll certainly take the results when you’re able to block three people simultaneously.

Though Williams seemingly chose to cut back on the two-point conversion attempt rather than hit the designated hole, DeCastro was actually successful in hitting his block. More than successful, in fact. After peeling off a double team on the defensive tackle, he buried the mike linebacker, putting him on his back in the end zone.

DeCastro’s strong work in the running game was consistent throughout his playing time. He delivered another fine seal block near the goal line on the third drive for Le’Veon Bell, though without the benefit of a quality replay, it is difficult to portray. On this occasion, he turned Red Bryant and put him on his back.

But he wasn’t finished. After Bell made a second effort to reach the goal line, DeCastro regained his feet and dove at a pile of players, hoping either to knock defenders out of the way or push Bell forward. 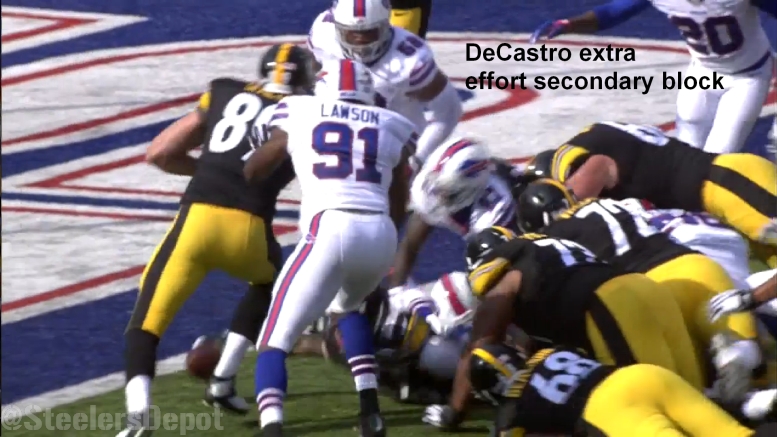 If there was an area in which he struggled—and this has been his larger area of concern in his young career—it has been in pass protection. This was seen on the 63-yard hookup with Martavis Bryant. Granted, he was working one-on-one against Kyle Williams, but DeCastro was walked back comfortably five yards behind the line of scrimmage, unable to set and reestablish his base. This happened a few times during the game.

No doubt, DeCastro will have to pick up some of the slack that has been lost out of the offensive line with Pouncey’s injury. This would be an opportune time for the fourth-year guard to take that next step in the elevation of his game. And it may well happen.