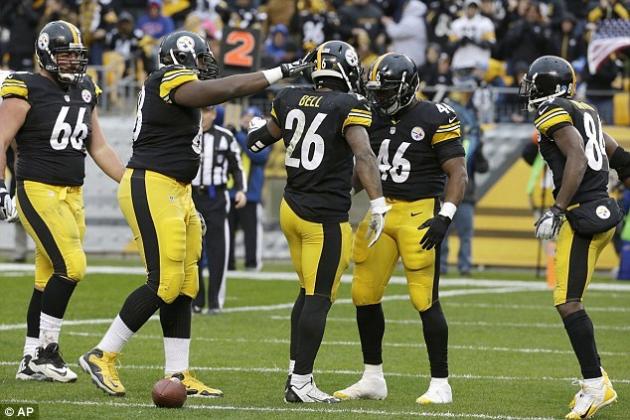 It isn’t often that a Pittsburgh Steelers victory is an afterthought, but on a day where Ben Roethlisberger went down in the third quarter with what appeared to be a serious knee injury, the Steelers 12-6 win over the St. Louis Rams was almost a footnote.

With the Steelers facing a 2nd-and-18 from their own 42 yard line trying to extend a 9-3 lead midway through the third quarter, Roethlisberger stepped up in the pocket at the same time Rams safety Mark Barron was falling down on the rush. Barron slid into the quarterback’s left knee, which bent awkwardly and left Roethlisberger on the ground in obvious pain. A few moments later the Steelers quarterback limped to the sideline with assistance from trainers, before being carted to the locker room.Mike Tomlin said after the game he didn’t know anything about Roethlisberger’s health at this time.

Before the devastating injury, Pittsburgh offense was rolling in the first half, stymied only by their own lapses in concentration. Le’Veon Bell was tripped up short of the goal line on the Steelers first possession, a 13-play, 77-yard drive that featured the return of Bell and continued dominance of Antonio Brown. Josh Scobee nailed the chip shot field goal to give Pittsburgh the early 3-0 advantage.

The Rams were forced to punt when Lance Kendricks couldn’t handle a low throw from Nick Foles on St. Louis’ first drive. Roethlisberger quickly marched Pittsburgh on the only touchdown drive of the game, capped by Bell bursting into the end zone from a yard out. The two-point conversion slant pass to Darrius Heyward-Bey was knocked away, holding the Pittsburgh lead at 9-3.

Will Allen stuck Tavon Austin with an excellent tackle three yards shy of the first down on the Rams next drive, giving the ball back to Pittsburgh with over eight minutes left in the first half. Roethlisberger squandered the opportunity however, overthrowing a well-covered Markus Wheaton and getting intercepted by Janoris Jenkins.

The Rams managed to turn the interception into a field goal, cutting the Pittsburgh lead to six points entering the half. A scoreless third quarter was marred by Roethlisberger’s knee injury, but the Steelers defense continued to hold strong.

St Louis managed another field goal halfway through the fourth quarter, aided by a pass interference penalty by Antwon Blake down the left sideline. Michael Vick, who struggled in relief of Roethlisberger, couldn’t get Pittsburgh moving on offense, giving the ball back to St. Louis with three minutes left. Vick fumbled twice (didn’t lose either) and threw at least one pass that should have been intercepted easily during his quarter-and-a-half of action.

Will Allen proceeded to come up with maybe the play of the game, racing over to intercept a Foles deep shoot on the first play of the drive for St. Louis. Pittsburgh had a chance to run out the clock if they could get one first down, but Heyward-Bey was tackled two yards short of the marker on 3rd-and-nine. Scobee’s 41-yard attempt was successful, giving Pittsburgh a 12-6 lead with two minutes left.

The Rams took over on their own 21, but went four-and-out after Kenny Britt could not control Foles’ fourth down pass to the ground as Blake upended him. Originally called a catch on the field, replays showed the ball slightly graze the ground as Britt’s forearm hit the turf.

It was a hard-fought, gritty victory for Pittsburgh, who may need a lot of those if Roethlisberger’s injury is as significant as it appeared. The quarterback will reportedly go for an MRI tonight, as Pittsburgh coaches, players, and fans wait expectantly for the results.

Brown was brilliant once again, grabbing 11 passes for 108 yards in the victory. It should be noted that Brown did not catch a pass once Roethlisberger exited the game. Bell’s return was also well-timed, accumulating seven catches for 70 yards to go with 19 carries for 62 yards and the game’s only touchdown. With Daniel McCullers and Ryan Shazier missing the game due to injury, Allen led the way with seven tackles and a huge interception, the first by a Steelers safety since Week 14 of the 2013 season (per Alex Kozora).

The Steelers will head home before turning around to host the 0-3 Baltimore Ravens on Thursday Night Football.