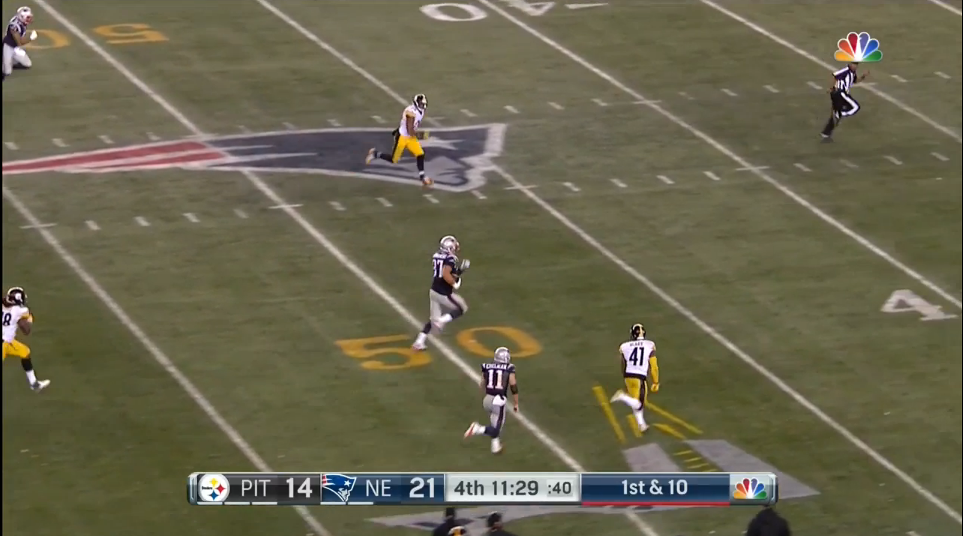 It was difficult to know where to begin when assessing the Pittsburgh Steelers 28-21 loss to the New England Patriots, especially on the defensive side of the ball, where so many things went wrong. After pouring over the game twice and seeing missed tackle after missed tackle, I knew I needed to start detailing Pittsburgh’s errors with the basics.

14 missed stops is an embarrassingly high mark for any NFL defense, but Pittsburgh actually trains tackling during drills in camp a good bit, making the errors more inexplicable. Side note, technically Blake should have another missed tackle, but Julian Edelman stumbled when shrugging the corner off, and Mitchell finished the stop. Unclear whether Edelman would have kept his feet or not without Mitchell’s intervention, so I didn’t count it.

Jones and Shazier began the blunders when both of them whiffed on Dion Lewis in the flat to allow a 13-yard pickup and a first down.

On the first play from scrimmage in the second quarter, Cortez Allen couldn’t break down to stop Edelman on a reverse, overrunning the tackle badly.

Rob Gronkowski’s first touchdown of the season was a result of the rare trifecta of mistakes, a blown coverage and two missed tackle, one by Golden and the other by Blake.

I noted this on Twitter as well, but Blake’s lack of effort on this play is definitely concerning. You can see him just trotting in pursuit of the play despite being very close the whole time. Not something you typically see from Blake, so we’ll give him the benefit of the doubt.

Unfortunately the missed tackles were way too common for Blake last night, who looked pretty ridiculous whiffing on this first down attempt against Edelman.

Shazier also had plenty of missed opportunities last night to go with several splash plays, whiffing badly on this attempt to tackle Lewis in the third quarter.

Harrison crashes the C-gap, leaving Shazier to scrape and replace him on the edge. The linebacker does so with ease, but can’t make the stop at the line of scrimmage for no gain, resulting in an 11-yard pickup on first down.

Blake and Will Allen were both to blame on this snap, as the cornerback missed the initial tackle in run support to allow Lewis to get to the second level, where Allen’s aiming point was too high to make the stop. That replay view shows it up-close and ugly.

As hideous as all of the aforementioned misses were, perhaps none were as atrocious as Mitchell’s terrible open-field, swing-and-a-miss attempt to bring down Gronkowski in the fourth quarter.

What in the world was that? The tight end never even made a move on him, as just slightly changing directions was enough to make Mitchell tumble to the turf. Embarrassing.

Maybe the most back-breaking missed tackle came courtesy of Timmons, who allowed Lewis to escape his clutches on 3rd-and-five from the Steelers 22-yard line in a 21-14 game with 10:21 remaining.

Not often you see Timmons miss such an easy tackle, especially in a big situation. The resulting score cemented the win for New England, as the Steelers wouldn’t answer until the final play of the game from scrimmage with seven seconds left.

The reasons for the misses come in all varieties; dropping the eyes at contact, poor aiming points, lack of strength, dismal form, and a failure to break down, but the result was consistent. New England rolled up 140 yards after the catch on Pittsburgh, a highly-concerning number for several reasons. The Steelers have enough issues in coverage as it is without adding tackling the catch to the list. The fact that the most misses came from Blake, who was basically in the game for his tackling, only creates more questions.

Pittsburgh will have ten days to get the issues fixed or risk opening the season at 0-2 when the San Francisco 49ers come to town next Sunday.