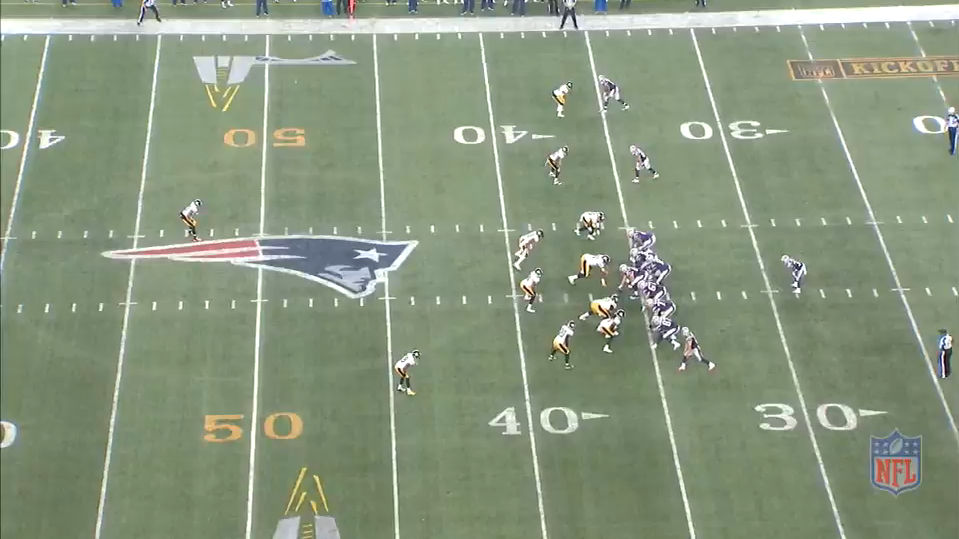 Get your hands on ‘em.

That was the plea from the fans. The message from the players.

And largely, the Pittsburgh Steelers attempted that Thursday night. After opening up in a Cover Three shell, the Steelers adjusted and played the New England Patriots close at the line the rest of the game.

But deciding against giving a cushion isn’t perfect either. And the Patriots exploited that numerous times on the way to victory.

New England realized Pittsburgh’s adjustment and weren’t going to play into it, running their receivers directly into the Steelers’ defensive backs.

Instead, the Patriots ran pick routes, slanting their receivers off the line and causing the Steelers’ defenders to run into each other, or take bad angles in an attempt to get back in-phase with the receiver.

The first came on what should have been a 43 yard touchdown from Tom Brady to Danny Amendola. Two receivers to the field side. The corners are on the same level and that’s critical here. That’s what makes them susceptible to getting picked.

And that’s what happens. The Patriots run a slant/wheel combination and William Gay, trying to cover the wheel, runs into the slant. By the time he’s able to work off it, Amendola has three yards on him and all the space in the world. Brady just overshoots him. 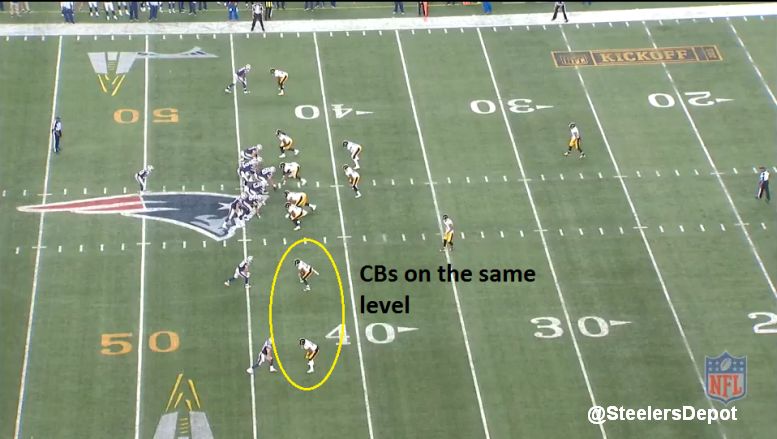 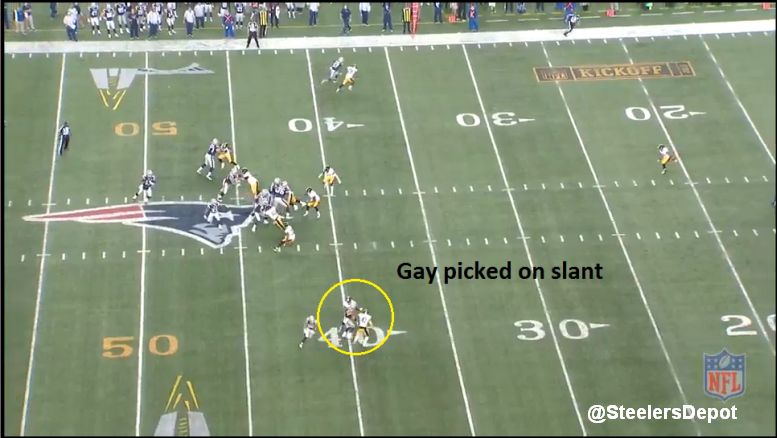 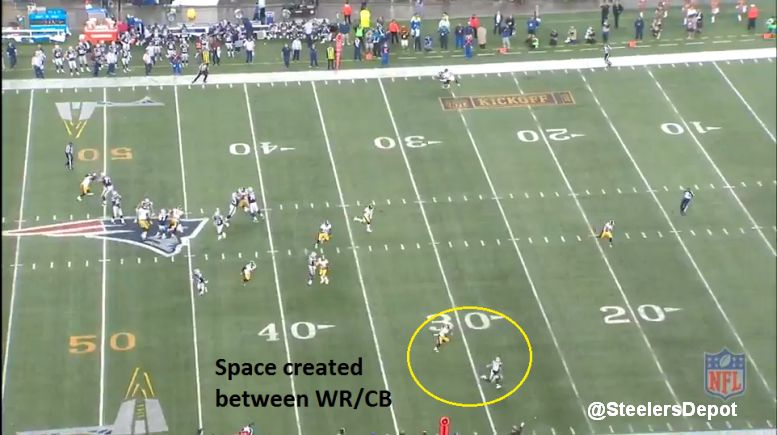 Which brings us to the first point. You have to play cornerbacks at different levels, or depth, to eliminate the risk of getting picked. If Gay is a couple yards deeper pre-snap, he’ll have no issue working over the slant route to get in-phase with Amendola. And with the cushion, the corner can still have his initial flat-foot read to look for any route in the three step game (slant) to drive on. But here, you’re asking to get beat deep.

See it again a short time later. To the top of the screen, the boundary, with a receiver and tight end to that side. Cortez Allen and Will Allen in coverage, having the same depth. A simple slant/flat combination, the tight end working inwards to set the pick and the receiver running to the flats, that the Steelers can’t defend. Allen gets caught up in Rob Gronkowski and has to work wide over the top. Naturally creates space and Brady hits the receiver in the flat for an easy completion. 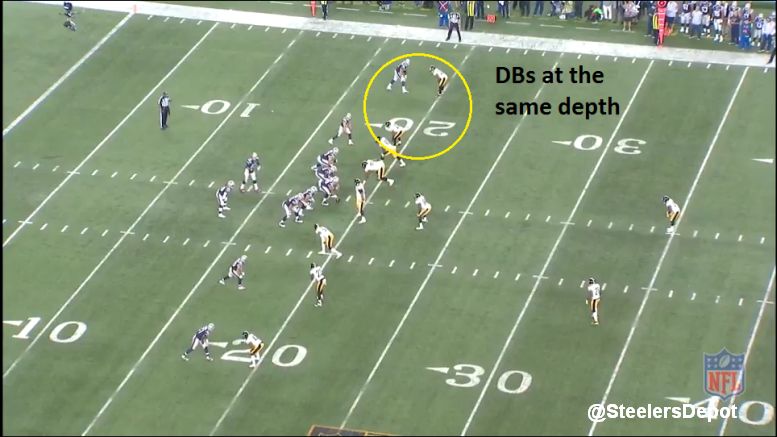 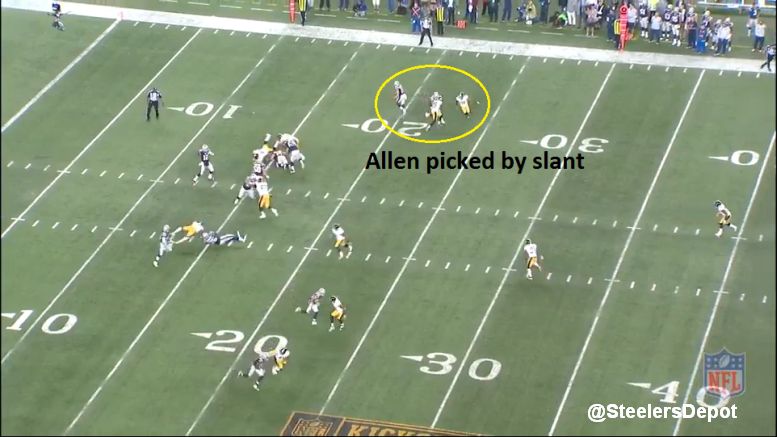 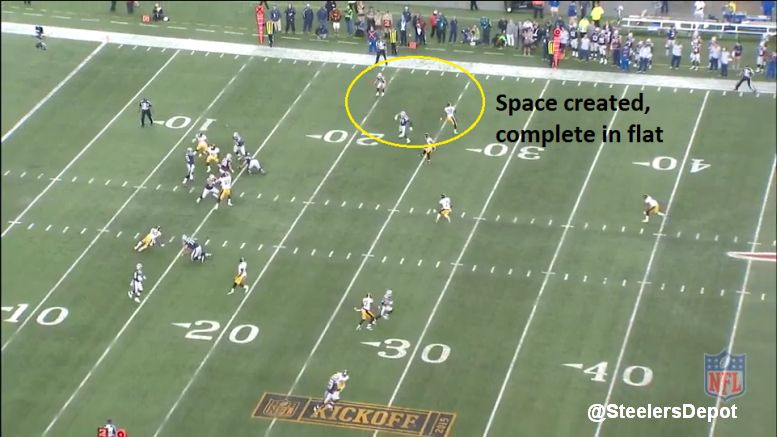 Even just a yard of difference can be enough. Here is William Gay about a yard deeper than Antwon Blake. Similar concept as to the first example, though this is more of a switch concept, and Gay is able to work over the inside breaking route without getting bumped off or changing his angle. Sure, a quick throw in the flat would be complete but it’s better than allowing the receiver to get behind you. 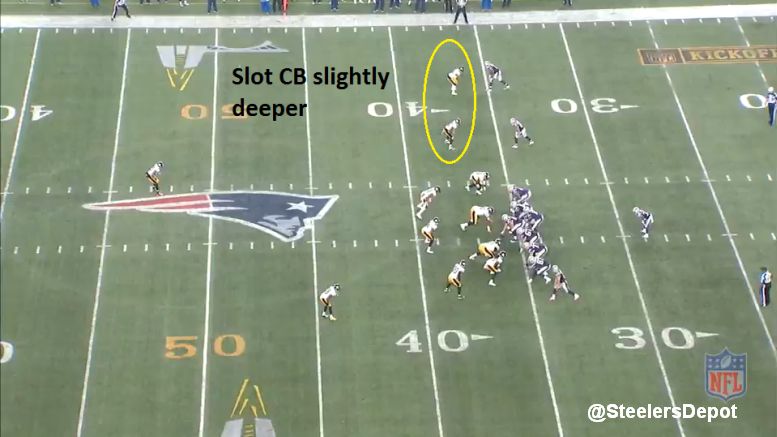 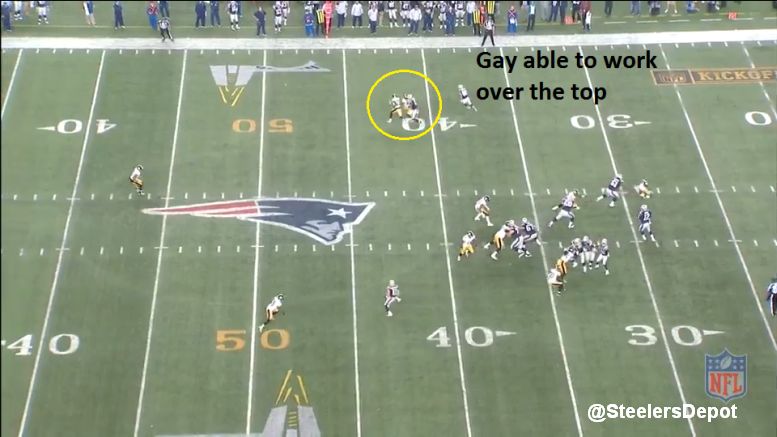 The last example came on Scott Chandler’s one yard touchdown. As the Patriots shift and spread out the field, Terence Garvin and Lawrence Timmons follow to cover the tight ends to the bottom of the screen. They are at different depths but must communicate a banjo call, understanding that if the receivers cross each other’s path, the linebackers will switch assignments. 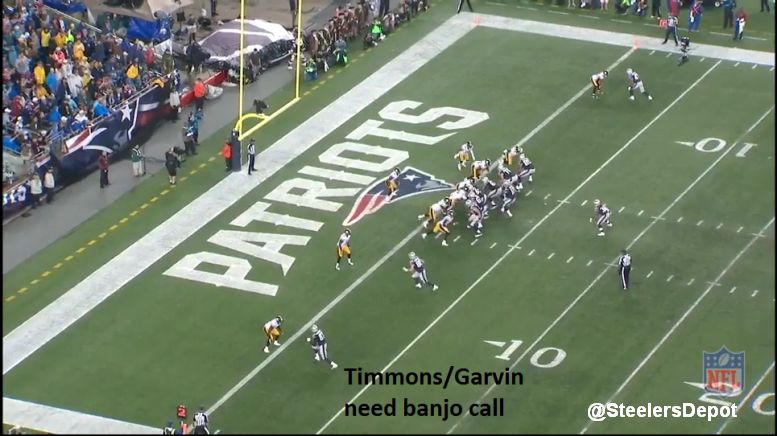 They fail to do that. Gronkowski runs a slant and Chandler into the flats. Timmons is forced to cover Chandler working over the top and even the slow-footed tight end is impossible ground for the linebacker to cover. It’s another easy touchdown for the Patriots. 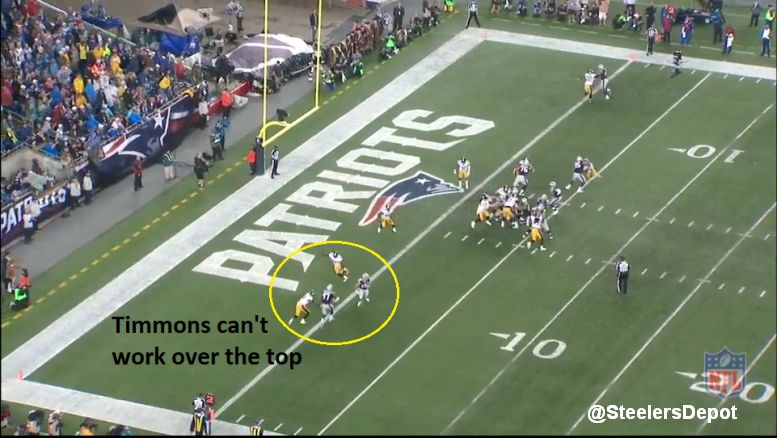 Again, the best option is for Garvin to take Chandler in the flat and Timmons on Gronkowski on the slant – the banjo call. It’s the only chance of defending this concept on the goal line. Adds to the list of communication breakdowns throughout the game.

It’s why, though I’m in the minority, I have no problem with the Steelers off coverage. I prefer to play three deep or let my cornerbacks read the QB or the receivers, driving on the ball than trying to stick tight in coverage the whole time.

I’d hope and expect the Steelers to play more traditional Cover 3 next week against the San Francisco 49ers.