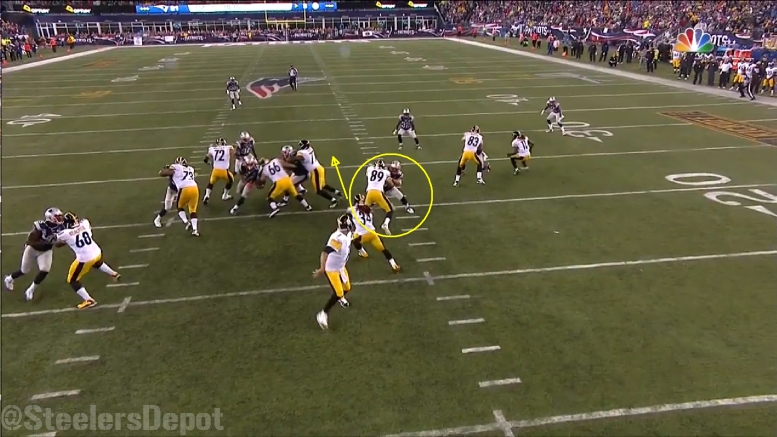 Watching the Pittsburgh Steelers’ opening game live, you saw a team that was, by and large, having little trouble getting what they wanted on the ground with running back DeAngelo Williams in the backfield. The most logical conclusion would be that the offensive line blocked well consistently throughout the night.

Closer inspection reveals a more nuanced tale that gives a lot of credit to Williams himself for exploiting cut back lanes, lanes that were often opened up by the tight ends, particularly Matt Spaeth, when the line failed to provide the most inviting window.

And so credit is due, as it so often has been, to Spaeth, who had a little something to do with the Steelers’ ability to run with efficiency on the ground in the season opener. His presence was felt from the opening snap, when his block left open a needed cut back lane that Williams exploited for an 18-yard gain.

Lined up as the lone tight end on an even formation, Spaeth drew the call to block left defensive end Rob Ninkovich, an assignment that younger tight ends are called upon less and less to do, having not developed the skills for it.

Expecting to be on the back side of the run, Spaeth admittedly got a bit grabby at the tail end of his block after sensing the back turning upfield, but it was negligible, and helped to open up the right side of the field for Williams.

Spaeth did not get a lot of burn for much of the rest of the first half, but he saw perhaps the majority of his couple of dozen snaps in the third quarter, and it was again on the Steelers’ opening run of the half during which his block helped open up a hole for a big gain.

On this play, the team opened up heavy on the right side, with Spaeth shaded behind right tackle and the in-line tight end. Again drawing Ninkovich, the defensive end began to shed into the play before finding himself on his back. Williams found the crease for a 28-yard gain.

Two plays later, the Patriots lined up their defensive ends in a two-point stance, virtually lined up as nine-techs. Spaeth had little problem walling off Ninvokich on a seven-yard run up the middle.

At the end of the drive, the Steelers used three tight ends and a fullback at the goal line from one yard out. Spaeth lined up shaded off the left tackle, drawing the assignment of walling off the linebacker around left tackle. He only got a bit of the defender, but it was all the play needed, as the offense scored.

Late in the third quarter, the Patriots lined Jabaal Sheard at left defensive end, again from a standing position. Again, Spaeth easily walled off the defender to provide Williams a clear look at what’s ahead, as he wriggled forward for a five-yard gain.

Thanks in part to the spoil of riches that the Steelers have in the passing game, Spaeth does not often see a lot of playing time, but it’s no coincidence that many of the team’s best running plays in a given game occur with the veteran tight end on the field, as some of the examples above show.