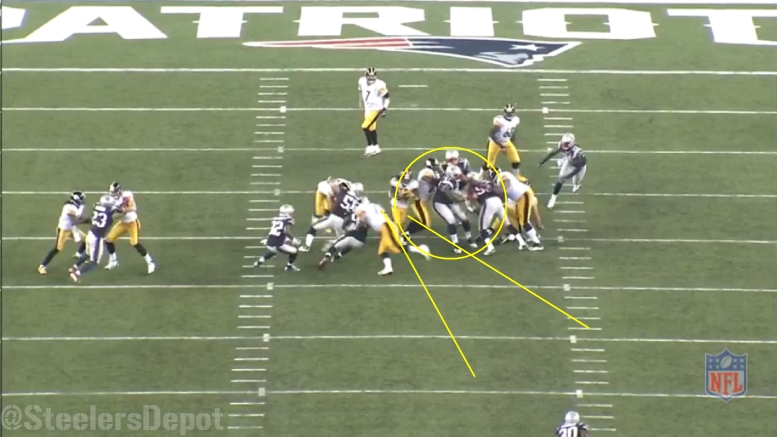 It’s getting to be the point where Pittsburgh Steelers right tackle Marcus Gilbert is the Steve McLendon on the offensive side of the ball, a player who often doesn’t get noticed unless he does something wrong, but is otherwise, when healthy, a relatively consistent performer.

After a rough start, last year was his best thus far up until the point that he began to deal with injuries, and the season opener has gotten the 2015 season off to a promising start for the fifth-year pro.

Gilbert’s block on the first play of the game was just one of many facets that led to a nice 18-yard run to kick off the game, but his was as important as any. He and David DeCastro worked a double on the defensive tackle before the latter peeled off to the second level. Gilbert continued to drive on his block, walling off the defender and helping to provide the cut back lane for DeAngelo Williams

On the following play of the opening drive, Gilbert executed an effective cut block on Rob Ninkovich on the short-side, play side of the field to cut off his pursuit of a screen pass that went for nine yards. Still later, he moved downfield to seal Ninkovich, creating a lane for Williams that he exploited for 11 more yards.

It was on the following play that the Steelers ran their gadget play, after which Gilbert was flagged for holding on a four-yard run from Williams. His hold set the Steelers up with second and 28 on the 42-yard line. It was the proper call, however, as he got a hand on Ninkovich’s shoulder immediately, and then, as seen below, caught his arm as the play came his way. 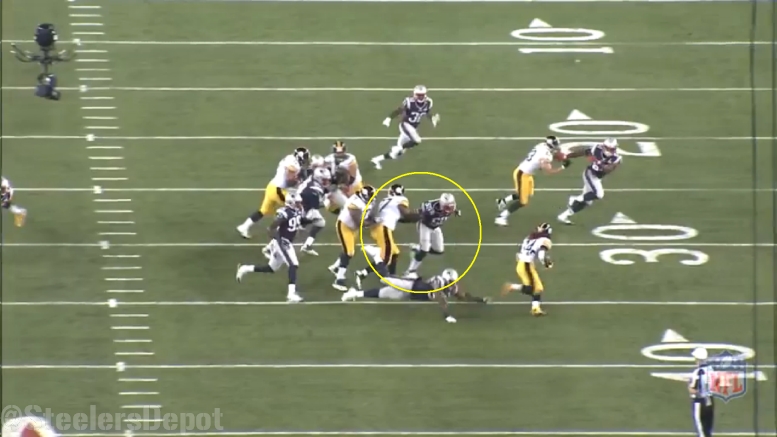 Gilbert also gave up a bit of pressure on the final play of that drive, though it did not affect the play. He did surrender a few pressures on the night, but perhaps only one of them had an impact on the end result of the play.

He had a bit of a back and forth as well with Jabaal Sheard, who lined up across from him on the third drive. On third down and eight, Gilbert did a very good job of moving his feet and mirroring the defensive end, getting an early punch to maintain distance and sliding well at the tail end of the rush as Sheard tried to work up the arc.

He was somewhat less successful blocking in the running game on the following two plays, on the first occasion allowing his man pursuit, and the second giving up the late tackle in traffic at the line, but he certainly had more good snaps than bad on the ground.

On the would-be touchdown pass late in the second quarter, Gilbert did well to follow with the presumed stunt as Sheard looked to loop around the A gap. But he did so maintaining the ability to turn back upfield when Sheard bailed back that way. This helped buy enough time to make that throw.

The veteran right tackle also had his fingerprints on the longest run of the night, a 28-yard run from Williams to open up the second half. On the play, Gilbert was able to wall off the defensive tackle inside, driving him into the middle of the field and sealing him to provide the lane for the back.

Another big play on the night that he was a part of was the 26-yard sideline reception by Markus Wheaton, as Gilbert provided sound pass protection him, stoning him and running him up the arc for over four seconds before finally beginning to lose his grasp, which was more than enough time to get the pass out.

On the final play of the third quarter, Gilbert lost some ground to Sheard in pass protection, getting stood up as the end filtered inside, but the quarterback was able to maneuver out of the pocket and make the throw.

On the first play of the Steelers’ final drive, Sheard was able to win inside with a spin move after about three seconds, but again, the quarterback escaped the pocket and nearly hit his target on the run.

I ended up highlighting Gilbert’s three most egregious plays in pass protection on the night during this review, and frankly, if that’s the worst that he put on tape, then I’ll take it.