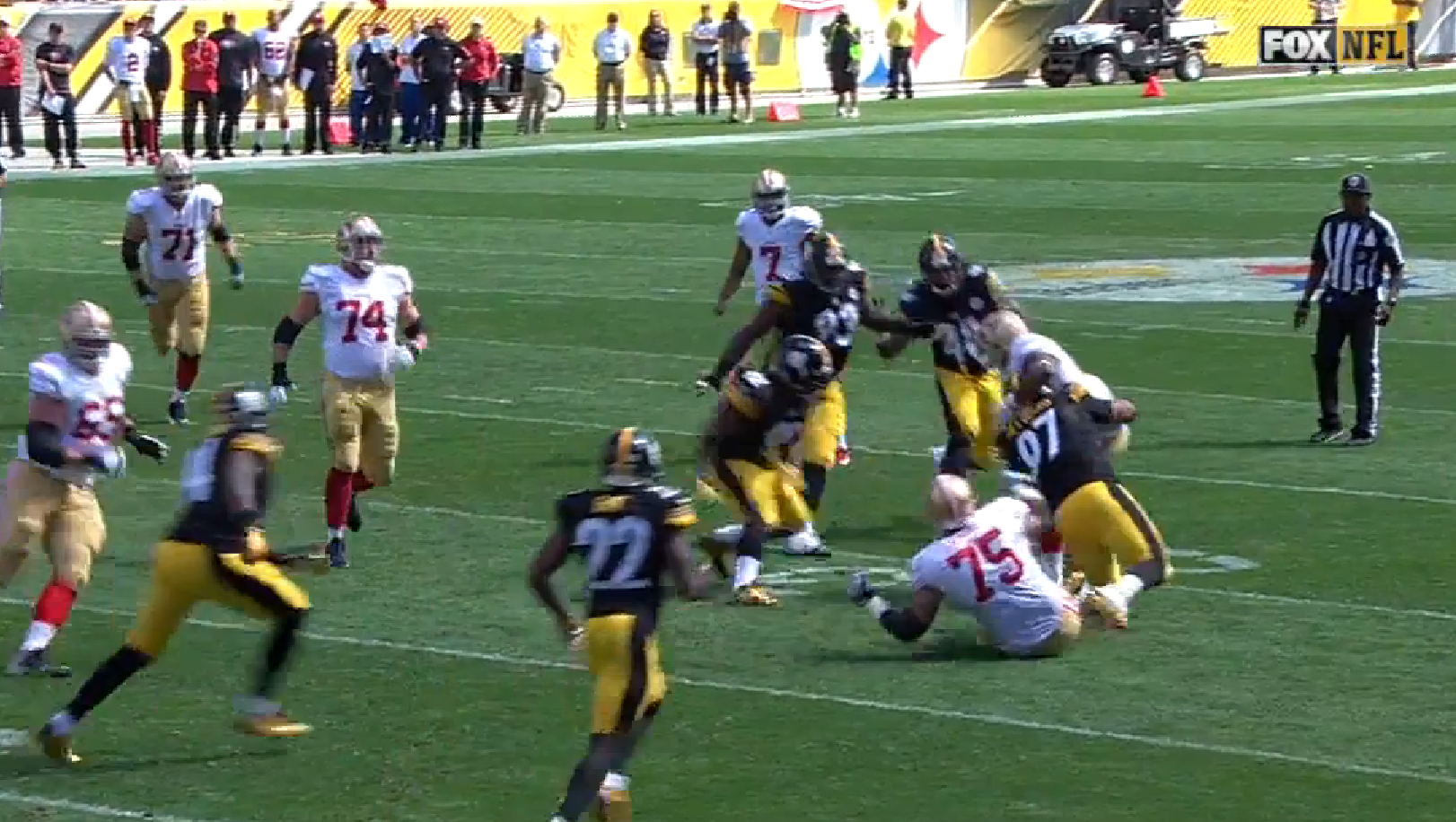 Pittsburgh Steelers defensive end Cameron Heyward is a budding star coming off of a season in which he was the first lineman on to lead the team in sacks in the past decade, but he struggled to have his usual impact in the season opener. That changed during the home opener, during which he showed a little bit of everything that explains why he cashed in big this offseason.

One trait in particular that has personified the former first-round draft pick since he came into the league was his relentless motor and irrepressible energy, which has helped build him up into the team leader that he is today, as his teammates feed off of his example.

Part of that comes from his tenacity away from the play, showing consistent pursuit on the back side of plays and chasing down plays down the field. A fine example of a back side takedown occurred early on the 49ers’ second drive, as Heyward showed excellent burst and explosiveness flowing down the line, blowing up the running back after a short gain.

Later on the same drive, he demonstrated his refusal to give up on a play that has escaped him as he chased down a scrambling Colin Kaepernick eight yards down the field. The 49ers allowed him to run upfield, assuming he would be on the back side of what seems to have been designed run, but perhaps that did not count on Heyward’s eager pursuit, dragging him down by the leg far away from his starting point on the play.

Still later on the same drive, as the 49ers looked about to score a touchdown, the defense began ruining those plans, with Heyward making back-to-back plays on second and third down. On second down, he blew up a running back screen pass, sensing that it was coming and staying home. In his pursuit, he forced the runner backward for a four-yard loss.

On the very next play, the 49ers left him one-on-one with the left guard, whom he stacked and shed with a swim over his right shoulder, getting on a straight line for the quarterback and preventing him from escaping laterally, getting him down by the foot for a seven-yard sack.

Later in the quarter, Heyward helped to induce a three-and-out on the 49ers’ next drive after getting pressure that helped lead to a sack on third down. Just before the snap, he stood up as though to drop in coverage, and the center mistakenly looked over to help his guard as Heyward rushed in free through the A gap. Capitalize on your opponent’s errors.

In spite of the Steelers being up big late, the fifth-year end showed some two-gapping against the run, holding the point against the left tackle and maintaining leverage as the back tried to lure him to committing to one direction or the other.

The ploy failed, as Heyward scraped off the block to make the tackle from behind. In terms of skill sets, he may have the most complete set for his position on the roster, able to do it all, including coverage when necessary.