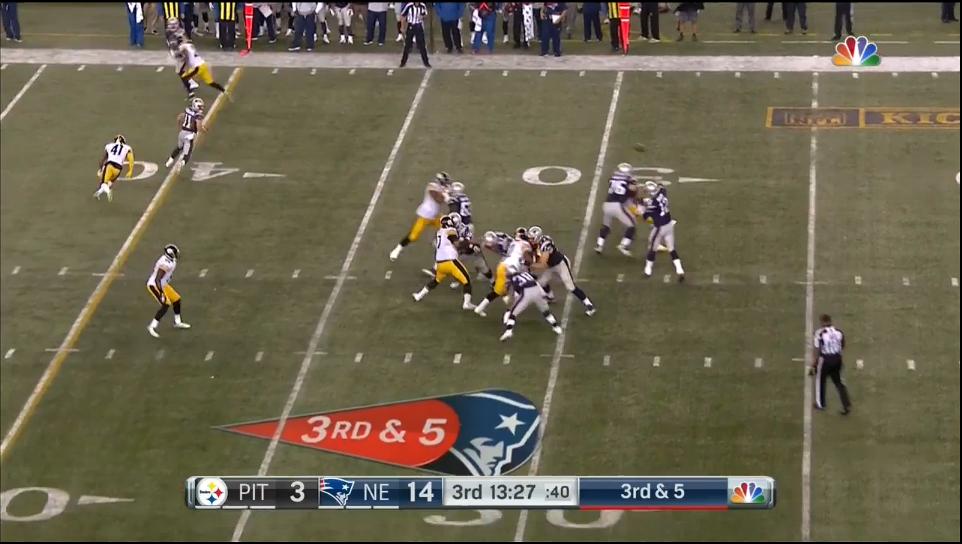 A lot of criticism has been levied against Pittsburgh Steelers cornerback Antwon Blake over the past couple days, much of it warranted after the third-year defender was consistently beaten in coverage by Julian Edelman Thursday night. With the return of All-22 coaches film (YAY), I took a look at Blake’s performance and usage by defensive coordinator Keith Butler. What I saw was concerning on several levels.

First, Blake is a tough, scrappy corner, who understands assignments, typically tackles well, and will play the pocket of the receiver at most catch points. He’s small, but he’ll press and play physical at the line of scrimmage, showing the agitating traits that every cornerback should possess.

What Blake has never possessed, is ideal man coverage skills. He’s not a bad athlete, but he certainly isn’t a great one, and his hips and feet aren’t smooth enough to stick with quicker, more agile receivers in coverage.

Unfortunately very few of Blake’s positive qualities were on display Thursday night, both because of his own limitations and because of some peculiar usage defensively.

The first snap we’ll look at comes early in the second quarter, with the game still scoreless. The Patriots spread the Steelers out with a five-wide look, and Blake lines up against Edelman as the inside slot corner. 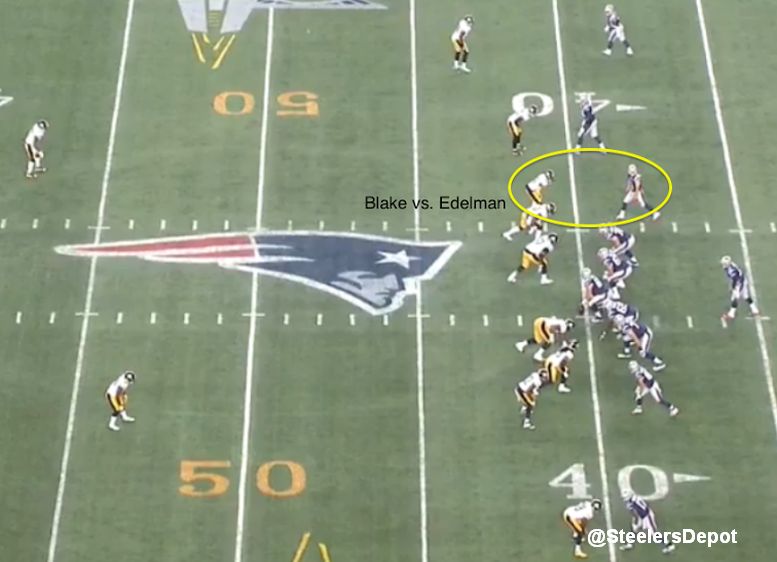 What’s unusual about this alignment is that Blake never saw time in the slot last year, during camp, or during the preseason, instead taking all his snaps at left outside cornerback. The biggest difference between playing in the slot rather than outside, is that a full route tree is consistently available to the inside receiver. He may not be as big or fast as X or Z receivers typically are, but ideally slot receivers have excellent quickness and route-running ability. Defenses typically counter by putting their top man cover corners against such receivers in order to limit the separation they can achieve in their patterns.

The Steelers had little choice on plays like this, as New England consistently spread them out with a tight end and running back outside of Edelman. The team obviously doesn’t want Blake in man coverage against Rob Gronkowski, although Will Allen clearly couldn’t cover him either. So Blake was relegated to face Edelman in the slot, and the result was consistently predictable.

Blake has an outside shade here when he should probably be head up in order to land his punch and stymie Edelman off the line of scrimmage. Instead the punch never lands and the receiver is able to quickly win inside and pick up a first down on third-and-seven.

New England knew exactly what type of mismatch they were creating for Edelman in coverage, and continued to exploit Blake for the rest of the game. Early in the third quarter, Patriots lined up Gronkowski outside to attract Will Allen, leaving Blake in the slot again on Edelman. Watch how clunky Blake’s footwork is as he hopelessly tries to mirror the receiver in coverage.

The amount of separation given up here is ugly, and it allows Edelman to pick up the first down easily on third-and-five.

Even when Edelman isn’t targeted in these situations, he still beat Blake with ease. Another matchup in the slot on the same exact route combination as the previous GIF, and once again Blake stumbles and can’t mirror the receiver.

Jumps inside right away on the snap and doesn’t punch or get a hand on Edelman, allowing the receiver to break outside easily in the flat. Tom Brady passes up the simple completion to try and hit Gronkowski down the sideline, but Blake’s limitations are once again exposed.

Of course, I don’t blame Blake entirely at all. It is nothing short of stupidity to ask a cornerback who hasn’t played in the slot to suddenly match up against one of the best slot receivers in the game. I get that the Patriots spread Pittsburgh out and forced Blake into the slot to find an advantageous matchup for Edelman, and getting beat once or twice like that is understandable.

But for the Steelers coaching staff to consistently see that Blake was overmatched, with one of the best slot cornerbacks in the game sitting on your bench playing zero defensive snaps, that is inexcusable. You traded a fifth (perhaps fourth) round pick for Brandon Boykin for a reason, a cornerback who consistently showed the ability to play in the slot at a high level during his time in Philadelphia. He’s a better man coverage cornerback than any defensive back on the Steelers, and frankly it isn’t close. It is absolutely imperative that the coaching staff understand their personnel strengths and limitations in order to put players in the best positions to succeed.

Asking Blake to play tons of man coverage Thursday night, particularly against one of the toughest covers in the league, is unfair to him and his limited skill set. How you consistently allow that exploitation to take place with one of the top slot corners in the league next to you on the sideline, and never adjust throughout the game, I’ll never know.

That isn’t to say Blake is without blame here. Even when he was in his normal spot at left cornerback, he was still consistently eaten up by Edelman.

Thursday night revealed what we all feared to be true heading into Week 1. Not only does Blake not have a starting NFL cornerbacks skill set, but his presence on the field is inexplicably keeping Boykin on the bench. I get that he is tough, physical, and popular with his teammates, but that doesn’t make him the best option for the team on Sundays, particularly when he also leads the team in missed tackles.

Blake needs to play a lesser role to minimize his limitations, while allowing Boykin’s presence to help eliminate mismatches the Patriots and other teams will attempt to exploit this season. That is literally what you traded for when you acquired him over a month ago. Use him.