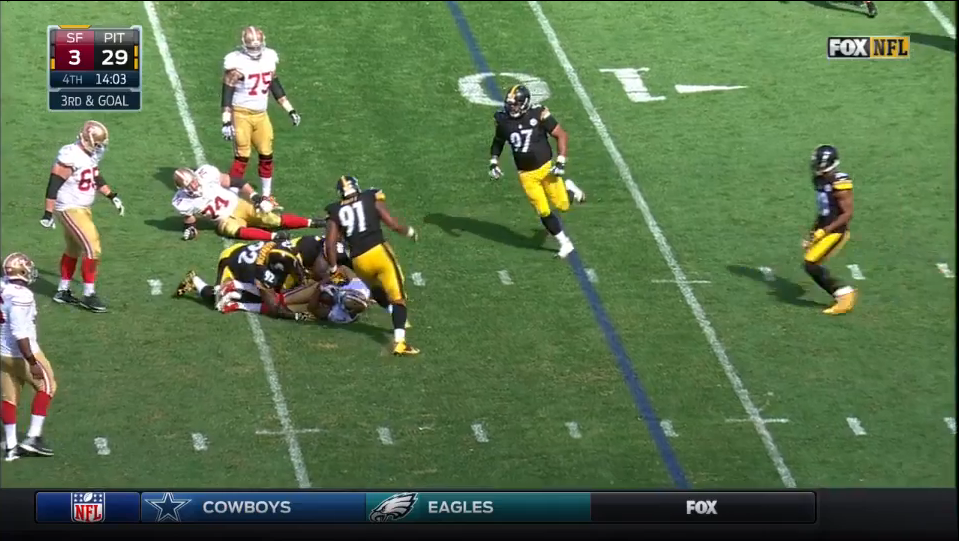 After watching the Pittsburgh defense struggle to control any aspect of their Week 1 game against the New England Patriots’ potent offense, and seeing how easily the San Francisco 49ers bullied a Mike Zimmer-led Minnesota Vikings defense this past Monday night, I was more than a little concerned with how the Steelers might fare in the trenches on Sunday. After all, social media was dubbing Carlos Hyde the next great NFL running back, and the 49ers 12/13 personnel looks promised to make things tough for a secondary that had struggled to stop New England’s dynamic tight ends.

My fears were proven to be invalid, as Pittsburgh dominated the line of scrimmage from start to finish yesterday afternoon. The defense had plenty of “bend” moments, but didn’t break until the game was fairly out of reach. Not only was the way Pittsburgh handled San Francisco’s powerful offensive line impressive, but the timing of several critical defensive stops was perhaps even more important.

San Francisco moved the ball well all day, finishing with 409 total yards, 58 of which came on the team’s second drive of the game, with Pittsburgh winning 7-0. The 49ers were in the midst of one of their typical 17-play drives when Colin Kaepernick hit Garrett Celek for a first down to the Steelers 10-yard line on 3rd-and-3. The 49ers figured to tie things up from there, but the Steelers defense was not ready to wilt in the red zone as they did last week, when the Patriots went 4-4 inside the Pittsburgh 20.

Four consecutive negative plays pushed the 49ers back to the Pittsburgh 29, thanks to a third down sack of Kaepernick by Cameron Heyward. Phil Dawson nailed the 47-yard field goal, but Pittsburgh’s defense had made their first red zone stand of the season in spectacular fashion.

I had written this week that the key to beating San Francisco was to force them to play from behind by being aggressive early on offense, and limiting the damage on defense. Forcing San Francisco to overcome a deficit would take them out of their run-heavy, ball-control offense and make Kaepernick beat the Steelers down the field.

Pittsburgh executed the game plan flawlessly, as a huge 49ers three-and-out and a Hyde fumble on back-to-back possessions allowed Pittsburgh to capture a 29-3 lead heading into halftime.

Hypothetically the Steelers could not have scored the rest of the game and still come away victorious, but the defense took protecting the 26-point lead seriously. Midway through the third quarter, the 49ers began another lengthy drive of 18 plays, 82 yards, only to come away empty despite nine cracks from inside the red zone.

How often do you see an offense convert two 4th downs inside the red zone and come away with zero points? I’m attempting to discover how to research this fact, but you can bet the number is extremely low. Yet the Steelers defensive fortitude was apparent Sunday, even when it appeared the officials stripped them of a fourth down stop on 4th-and-goal from the three. Mike Davis seemed to be stopped short of the two-yard line by Cam Thomas, Daniel McCullers, and Ryan Shazier, but officials upheld the first down upon further review.

The 2014 Steelers defense would have likely wilted in this situation, especially considering the substantial lead late in the third quarter, but this year’s group maintained their tenacity despite the circumstances. Davis was stuffed on first and third down carries, while Arthur Moats came flying in to force a Kaepernick throw-away on second down. On fourth down Kaepernick scrambled right and flipped to Bruce Miller for what should have been an easy touchdown, but the fullback dropped the ball after being knocked out of bounds by Lawrence Timmons.

The Steelers almost pulled off a trifecta of goal line stands (they would later) early in the fourth quarter, with Pittsburgh still leading 29-3. Rookie Bud Dupree notched his second sack of the season on 3rd-and-goal from the Steelers 11, but Kaepernick was able to hit Anquan Boldin for a touchdown on 4th-and-14 when Brandon Boykin fell down in coverage. The veteran receiver appeared to fail to get two feet in bounds, but the review was inconclusive, giving the 49ers their first touchdown of the game.

The Steelers would get their third red zone stop in garbage time with the score at 43-18, when the defense again held the 49ers pointless despite six plays from inside the red zone. Kaepernick scrambled for the end zone on 4th-and-three, but a diving tackle by Dupree tripped the quarterback up a yard shy of the goal line, preserving the 25-point victory for Pittsburgh.

Nothing is on the line at that point in the game except pride, something this defense has had far too little of over the past few years. Against New England in Week 1, even the unit’s few positive plays were scarcely celebrated, despite the fact that the game was never really out of reach. In the days leading up to the Steelers match up with San Francisco, I thought we would learn a lot about what this defense was made of based on how they responded to a physical test against a grind-it-out football team in San Francisco.

The resulting total domination of the 49ers offensive front by Pittsburgh’s front seven told the whole story. Yes this defense still has its issues, and so does new defensive coordinator Keith Butler, but progress is being made in two main areas. The unit is vastly more talented than they were last year, and heart and toughness are once again on display. You always saw that in William Gay and Cameron Heyward and James Harrison. Now you’re seeing it in Ryan Shazier, Arthur Moats, Stephon Tuitt, Antwon Blake, heck, even Cam Thomas and Jarvis Jones.

That’s the kind of fire and relentlessness the Steelers defense will need to exhibit in droves this season. They are gonna give up some big plays, and chunks of yardage to most opponents, but can they protect their own goal line? Can they consistently bring their A-game in the red zone, making teams work their butts off to finish drives and settle for field goals, rather than giving up easy, uncontested touchdowns a la Week 1?

The answer to that question may in fact be the key to Pittsburgh’s season. We know the offense is going to score points in bunches, and we know the young defense is going to struggle at times. These things are expected. What we don’t know is how the unit will respond to adversity as the season goes on. If Week 2 is any indication however, the results could be friendlier than we expected 11 days ago.