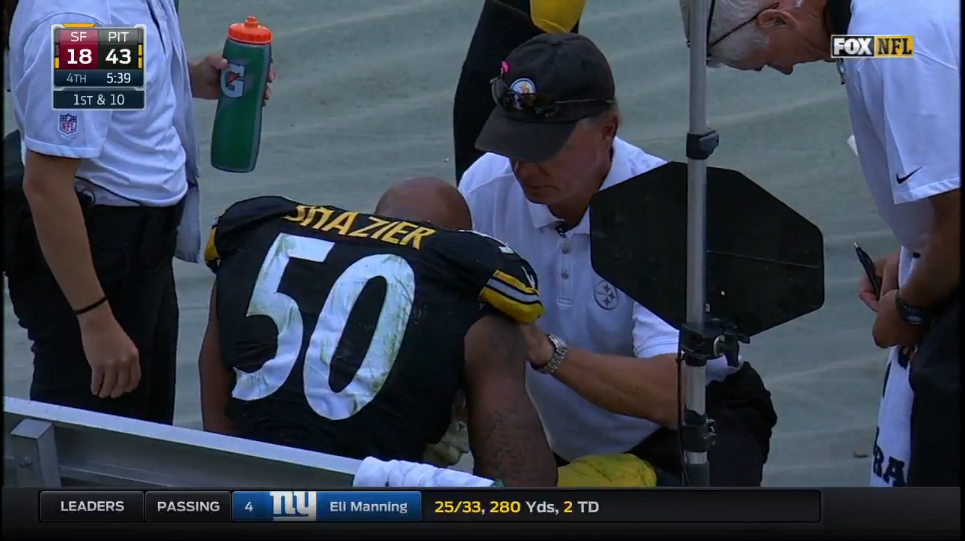 I figured I’d write on this topic during the week and it’d generate a decent discussion. Until Sunday when Ben Roethlisberger went down.

Now, Ryan Shazier’s injury is a scratch on the arm to someone who just broker their femur.

That’s a metaphor. Ben doesn’t have a broken femur. Or a scratch. I think.

All week, Mike Tomlin made it sound like Shazier’s injury was just a bump. Another “boo-boo.” Tomlin owes us nothing and I don’t really care if he knew how bad it was and lied or whatever, but Shazier went from seemingly healthy to ruled out on Friday.

It was the eighth game Shazier has missed in two seasons. Injury prone? Pfft, I don’t care about that arbitrary label. But oft-injured? That’s hard to argue with.

For a guy coming into his own on the field, he’s forced to deal with previously uncharted waters off it. Shazier never missed a game at Ohio State. He may have been nicked and dinged but when it came time to play, he suited up in all of his three years as a Buckeye.

Now, he’s just as used to sitting on the sideline as he is chasing down NFL running backs.

His injury situation reminds me of what I wrote in my hypothetical best/worst case draft scenarios after he was drafted.

“Playing in a sixteen game season, Shazier gets dinged up. Never dealing with injury before after a healthy collegiate career, he has trouble handling it. Tries to push through too much instead of letting his body recuperate and plays hurt throughout his first season.”

Of course, that was all for fun, idle speculation to pass along the offseason. But in a way, it feels like it’s coming true now.

It’s tough for any player to handle an injury. I don’t pretend to know, I can only empathize, not sympathize, but for a young player with the talent he has to take a big step back after his best game in a Steelers’ uniform is gut-wrenching.

There’s arguably a mental factor at play. How do you handle watching your teammates play? Wishing you could be out there to help your team, with all the pressures associated with a first round pick? How frustrated are you that you can’t? Do you get down on yourself, question your own ability? Do you push yourself to come back, risking your future health?

I don’t know what’s going through his mind, but whatever it is, it isn’t easy. Being able to overcome it, fighting through the mental grind and getting your body right, is just as important as anything Shazier does on the field.