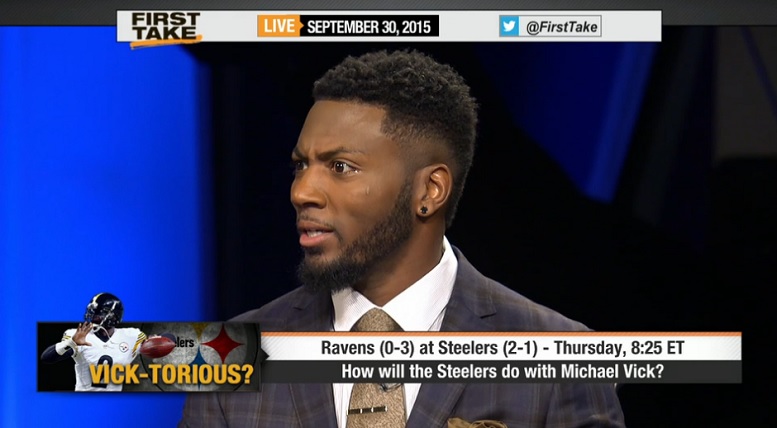 How far can the Pittsburgh Steelers go with Michael Vick as their quarterback until starter Ben Roethlisberger is able to return from his left MCL sprain? That was a question posed to former safety Ryan Clark Wednesday morning on ESPN’s “First Take” and his answer was quite optimistic.

“The thing is, hopefully they don’t have to go very far,” started Clark. “They’re saying four to six weeks, planning for six weeks. You look at the games they have on the docket, the Ravens are early on Thursday, which I think bodes well, because you don’t know which Pittsburgh Steeler team is coming out.

“I look at the next six games and you have the Chargers, Cardinals, the Chiefs, the Raiders and the Bengals, and I think they split those games. And if he [Vick] plays extremely well, if they figure out the ways to use him the right way they can win four of those games.”

Clark went on to talk about the weapons the Steelers have on offense and how that could help Vick succeed until Roethlisberger returns.

“You watch, Le’Veon Bell, other than Matt Forte, there’s no better pass-catching running back in the NFL,” said Clark. “I think he’s the best all-around back. So he’s a guy that you can use as a safety valve. Heath Miller, who is kind of forgotten because Antonio Brown is so good, is another guy who’s very reliable. Great hands, good route runner.

“The offensive line has been playing exceptionally well. DeAngelo Williams has run the ball very well, so it’s on Todd Haley to figure out ways to make Mike Vick comfortable.”

“I think they can get a little more out of him [Vick] than the last couple of teams [that he played for],” started Dilfer. “Mainly because this offense that Todd Haley has implemented in Pittsburgh has a lot of the spread concepts in it. It has a lot of Saturday in it, for lack of a better term. Get the ball out of your hand quick. Get it to your playmakers in space. A lot of stuff like the Packers did the other night where you just throw it out in the flat where two receivers are blocking. Kind of run-pass option stuff.

“Usually with Michael Vick, the longer that the ball is in his hand, the worse the play is going to become. So, the quicker it’s out of his hand, the more successful. He’s played a lot of football, he can read a defense, he can get you in a decent play and they have a lot of good players around him. So, I think them and the Cowboys, both, have been using the term, “they’re not going to thrive, but they can survive.”

I couldn’t agree more with Dilfer when it comes to Vick getting the football out of his hands quickly. However, I do worry about Vick making good decisions even if he does manage to get the football out quickly Thursday night against the Ravens. Having a short week to prepare also worries me.

As far as Clark thinking the Steelers can win four games prior to Roethlisberger returning, we’ll see. While, Vick has won a lot of games during his career, he’s been a very sub-par quarterback over the course of the last several seasons. So unless the Steelers defense can limit their opponents to 20 or less points in several of their upcoming games, and in the process provide Vick some short fields to operate on until Roethlisberger returns, I think it will be very hard for the team to notch four wins in their next six, if indeed that’s how long it will be until Roethlisberger returns to action.