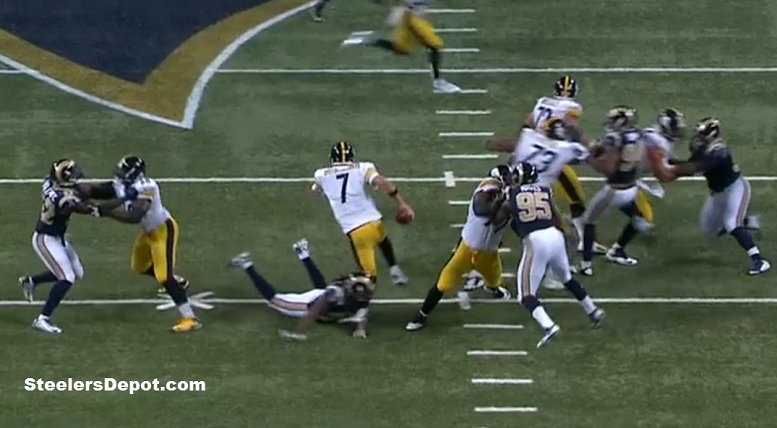 Even though the Sunday hit to the left leg of Pittsburgh Steelers quarterback Ben Roethlisberger by St. Louis Rams safety Mark Barron has been considered to be illegal in the eyes of several people, including Roethlisberger, himself, one NFL insider doesn’t believe a fine will be levied by the league.

According to Ed Werder of ESPN, an NFL source has told him that a fine isn’t likely on the way for Barron.

While the hit to Roethlisberger’s lower left leg that ultimately resulted in the quarterback suffering a sprained MCL didn’t appear to malicious, it did appear to be against the rules and therefore probably should’ve resulted in a flag.

Barron commented on his hit of Roethlisberger after the game and he didn’t see any fault with his actions on the play in question.

“I stumbled on the way in and just caught his leg, the Rams safety said. “Some kind of way, he ended up hurt. I caught him down around his lower leg. He was grabbing his knee. I didn’t have anything to do with his knee. I saw him fall. I didn’t see how he fell, I just saw him fall. I don’t know exactly what happened to him. Like I said, I just caught him down around his ankle and he fell and grabbed his knee.”

It will be interesting to see if Vice President of NFL Officiating Dean Blandino comments on this play either today or Wednesday and especially if Barron isn’t subsequently fined. While it wasn’t malicious or with intent, the league probably needs to take action nonetheless in order to help prevent injuries to quarterbacks happening like this in the future.