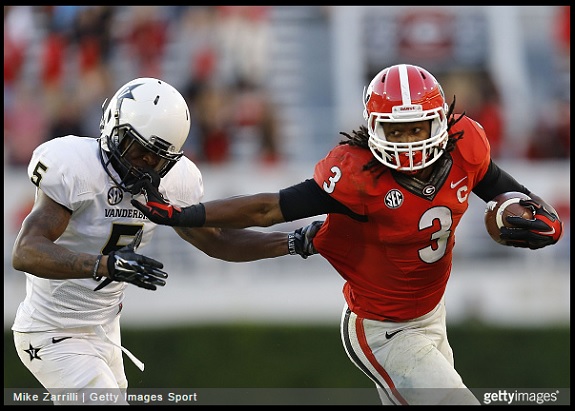 St. Louis Rams rookie running back Todd Gurley is probably itching to take the field for the first time since tearing up his knee last November and it appears as though he’ll get that chance today against the Pittsburgh Steelers.

Gurley, the Rams first-round draft pick out of Georgia, is flying in family and friends to see Sundays game, according to Ian Rapoport, and that’s probably as good as sign as any that he’ll be making his NFL debut. The running back practiced fully all week and reportedly split first-team carries with Tre Mason, according to head coach Jeff Fisher, who labeled Gurley a game time decision on Friday. Gurley officially ended the week listed as questionable.

More evidence #Rams RB Todd Gurley is expected to play for the 1st time in his career: He’s flying in his people to STL to watch him.

If Gurley does indeed suit up against the Steelers, one would think his workload would be limited to 15 touches or less. During his college career, Gurley rushed for 3,285 yards and 36 touchdowns on 510 carries. He also caught 65 passes for another 615 yards and 6 touchdowns.