By now, hopefully you’ve read our New England Patriots’ offensive scouting report. Here, Jon Ledyard and I have teamed up to break down the defense. As we did for the offense, I’ll break down the scheme while Jon looks at individual play.

I have a little less defensively than I do on offense. Maybe because I don’t know as much about scouting defenses, maybe because they’re a little more reactionary and tougher to get a read on, maybe because we don’t have All-22 tape and you learn very little about a team’s secondary.

It’s a multiple front that will show three and four down lineman looks.

The defensive line is primarily a one-gap defense. Loves to penetrate and get upfield though when you have great assets like Dominique Easley, who Jon will surely fill you in on, it’s a pretty easy decision.

As pass rushers, the Patriots stunt game is creative and successful. They’ll stunt everyone. Whether it’s combination stunts with the defensive end and the outside linebacker or two defensive tackles crossing, they try to play mind games with the offensive lineman. Understanding tendencies for certain stunts, something I didn’t get a good enough feel for, and verbalization to pass them off during the play will be critical.

One particular stunt I’ll illustrate here came on third and ten when you can get a little more exotic as a defense. Slants the away side defensive tackle into the stunt side A gap, crossing the center’s face and drawing his eyes while the play side defensive tackle shoots into the B gap. The outside linebacker loops all the way inside to the A gap. If the center fails to see it because he’s occupied, the linebacker is going to scoop free and either have a clean path to the QB or a one-on-one matchup with the running back. Either way, a clear advantage for the defense. 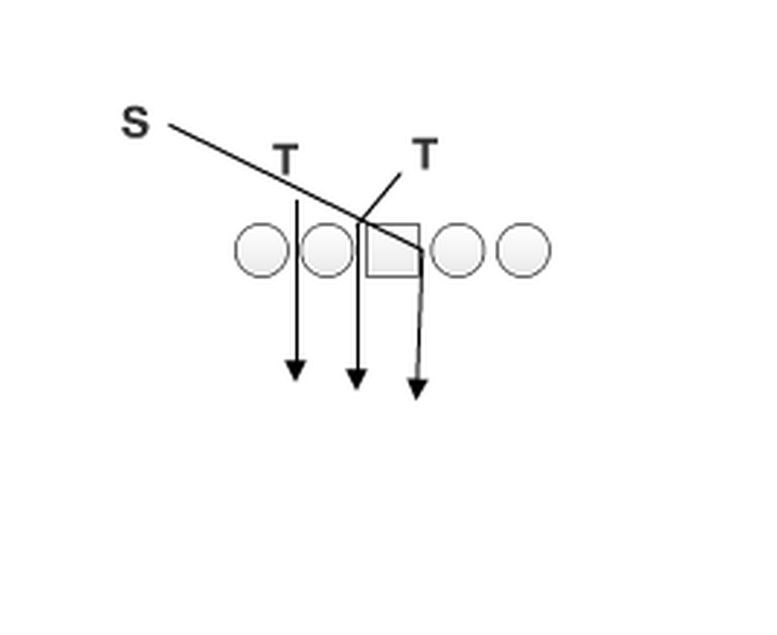 And here it is on tape. 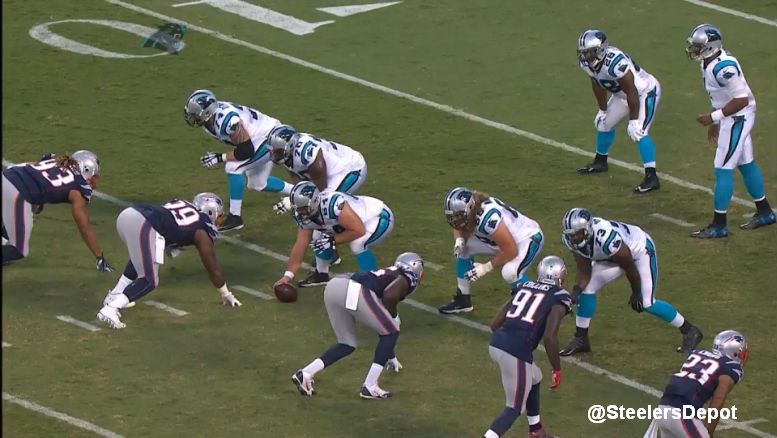 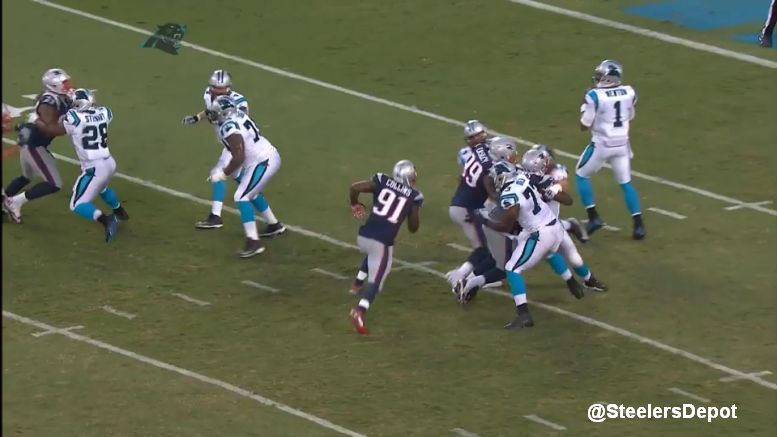 #91 Jamie Collins is the X-factor on that defense, the Rob Gronkowski of that side. Line him up everywhere. To either side, will blitz, drop him a ton, just an excellent athlete that has to be accounted for on every play.

In some short-yardage situations, the Patriots will show a Bear front, covering each guard and the center. Have the linebacker responsible for the bubble over the B gap, shooting them through. 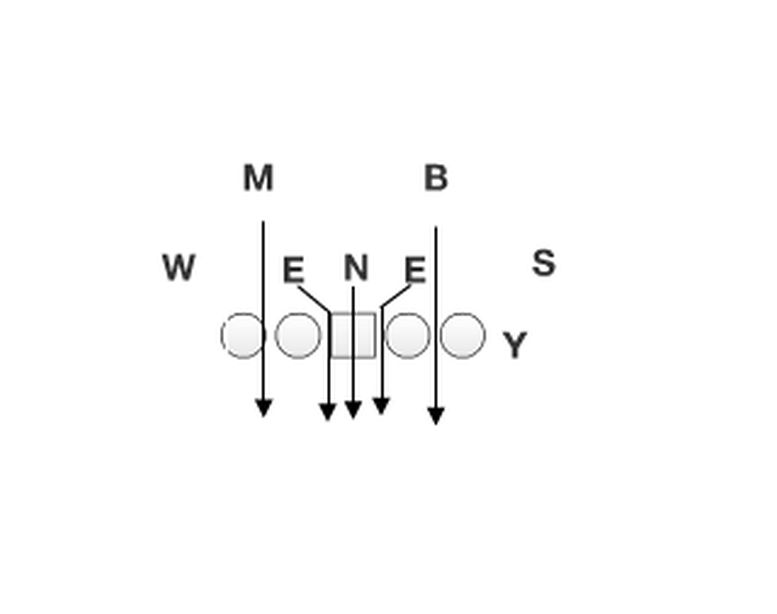 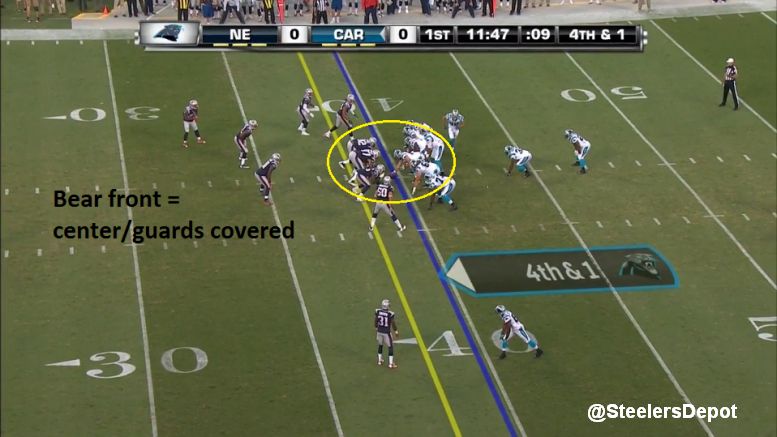 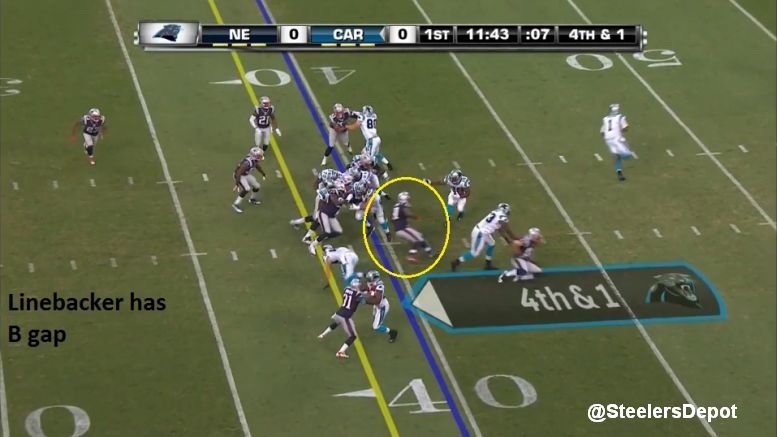 They almost may give away some of their B gap blitzes from their linebackers. Move the NT head up over the center, allowing space for the linebacker to blitz the B gap. 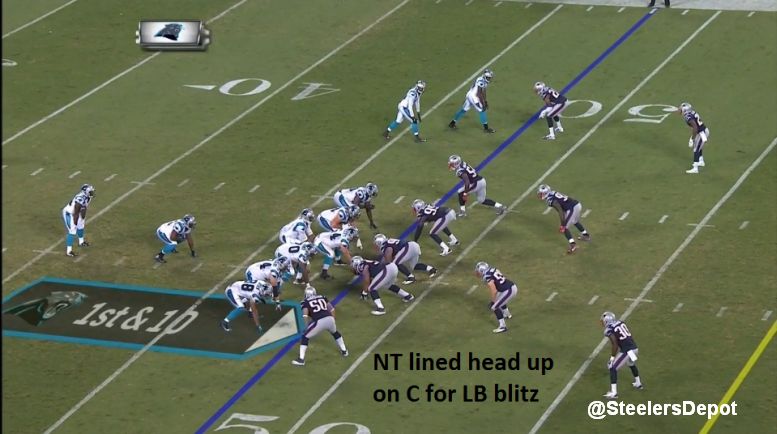 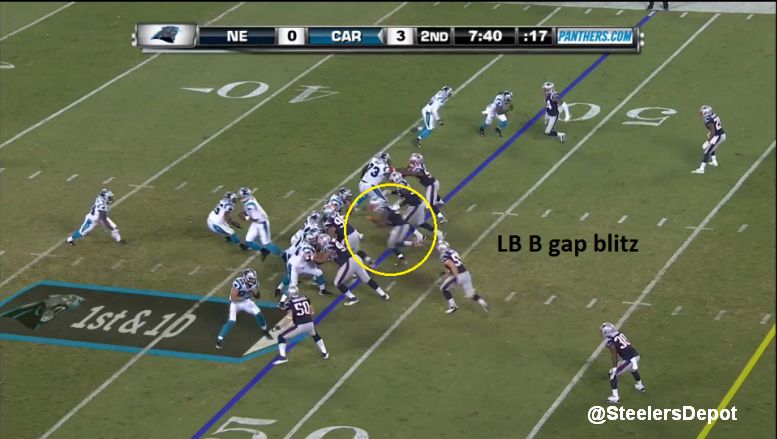 It appears to be a predominantly man scheme though again, a lack of coaches tape makes secondary scheme difficult to decipher. See a lot of bail technique from their cornerbacks, funneling the receivers to the middle of the field and free safety Devin McCourty, one of the best in the game who cashed in during the offseason. Patrick Chung plays in the box and given his profile as a big hitter who lacks coverage skills, it makes sense. 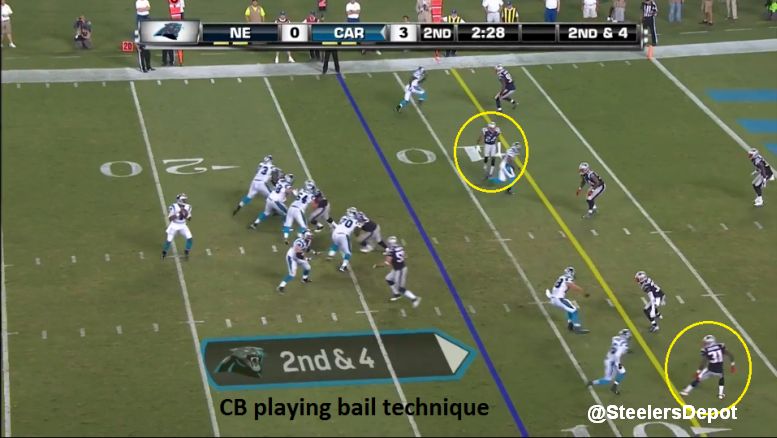 The cornerbacks play sides, not receivers. Super Bowl hero Malcolm Butler on the left side and Bradley Fletcher on the right. Want to get Antonio Brown matched up on Fletcher, #24. Tarell Brown (#25), longtime veteran, is the team’ slot corner when they go nickel.

Panthers have run some slant/flat against the Patriots’ man coverage on third and short, taking advantage of the fact the defensive backs won’t banjo call and switch. Effective short-yardage and red zone concept.

In general, with the corner’s bail technique, you’re going to have to win in the middle of the field. Slants, dig routes, cross the safeties face and find windows behind the linebacker. Think it will be tougher to win vertical, especially with Martavis Bryant out of the lineup. Keep AB isolated in 3×1 sets, forcing the defense to declare bracket coverage, creating one-on-ones elsewhere, or give you the one-on-one with Brown is your best bet. Get him on Fletcher and take some vertical shots. That’s the best way to win over the top.

It is the preseason so the Patriots blitz package was pretty vanilla. Only counted one safety blitz, bringing Chung and Collins at once and dropping two linebackers. Man coverage behind them.

Matthew Slater and Duron Harmon appear to be the starting gunners. Slater is of course one of the best in the league at his position. Expect it to be difficult for AB to get much going in that facet.

Defensively the Patriots are functional, not flashy, a solid group of assignment-sound, high-energy competitors that typically don’t give up many big plays. It is a much different-looking group then the one that manned the field last year, as stalwarts like Vince Wilfork, Darrelle Revis, Brandon Browner, and Kyle Arrington have all moved on. Not many teams can lose that many veterans and still boast such an experienced defense, but such is the longevity of New England’s unit.

They are led up front by two of the better run-stopping defensive ends in the game in Rob Ninkovich and Chandler Jones. Ninkovich has made an NFL career out of working his tail off, being functionally strong, and utilizing arm extension to keep blockers off his frame. Jones is a much better athlete with light feet and long arms, but he’s never really developed into the pass rusher New England envisioned him to be when they drafted him in the first round in 2012.

Jabaal Sheard was an excellent free agent pickup for New England, a stout outside linebacker with the positional versatility to play inside with his hand down or from a two-point stance. Think of him as a Pernell McPhee-type of chess piece that Bill Belichick should have a field day with. Sheard, like Jones and Ninkovich, isn’t a highly-skilled pass rusher, but he’s got adequate power and good hand usage at the point of attack. His first step is very mediocre however, and he isn’t the type of athlete to win the edge consistently.

On the interior, second-year player Dominique Easley is turning heads with an outstanding preseason in New England. I don’t know if he’ll start on Thursday night, but his burst off the line of scrimmage is simply insane now that he’s fully healthy. Exhibit A:

As a pass rusher he’s no slouch either, with unreal power in his punch and great agility to absorb contact and keep collapsing the pocket. This wasn’t even my favorite pass rush of the game by Easley, but it was the one you could see the clearest without All-22.

The Patriots best defensive player is probably Jamie Collins, a second round pick from 2013 out of Southern Mississippi. An athletic linebacker who Belichick and defensive coordinator Matt Patricia line up all over the formation, Collins can cover and rush the passer, but it is his skills versus the run that really pop on tape. This goal line stop is one of the most impressive plays I’ve seen in quite some time.

Read your keys, eliminate the lead-blocking center with tremendous pop and physicality, then still have the balance and strength to arm-tackle one of the most powerful backs in the league before he reaches the goal line. That’s as good as it gets.

It didn’t take long to see why the Patriots are big fans of Malcolm Butler as their top cornerback. The Super Bowl-winning corner is physical and extremely confident in his skills. He’ll tackle in run support all day, and closes quickly on the football with a willingness to drive through his target. Butler isn’t a great athlete and he isn’t very big, so he can be susceptible to vertical threats down the field. Davante Adams and Brandin Cooks gave him issues in this way. Here’s Adams getting a step or two on him, although Aaron Rodgers overthrows his second-year receiver by quite a bit.

New England’s pass defense is very suspect to say the least. It is a largely unproven unit that has even seen Devin McCourty play some at cornerback due to the lack of talent the team currently possesses. McCourty is a great center-fielding free safety with ideal route-recognition skills and good instincts, but he didn’t look fluid or comfortable at cornerback on tape. We’ll see who starts on Thursday, but this Patriots secondary is easily the weakness of their defense right now.

I expect that Pittsburgh will be very aggressive down the field early on in this game, as the Patriots defense struggled some in the preseason against speed. The unit is very assignment sound, playing with a physical edge and rarely missing tackles, but they aren’t the most athletic bunch, especially in the secondary. Martavis Bryant would be a matchup nightmare for them, but alas his four game suspension begins on Thursday. New England is very lucky that Le’Veon Bell and Bryant will miss this game, as their unit is definitely still figuring things out, especially against the pass. Even without that dynamic duo, Pittsburgh’s offensive line should be able to give Ben Roethlisberger plenty of time to work the ball down the field to Antonio Brown and Markus Wheaton.

As for the Patriots special teams coverage, it is very difficult to evaluate them off of preseason tape given the high number of players manning the unit who are no longer in the league. So many eventual roster cuts make up teams units in the preseason, that judging them right now is pretty unfair. I will say they gave up big chunks of yardage on several punt returns, but the players I identified as the main culprits are no longer with the team.

First punt of the preseason game against Carolina, where you would assume the Patriots would be running some of their top special teamers, Duron Harmon (I think that is who was the left gunner) over pursued and let Ted Ginn race by him for a 32-yard return into Patriots territory. Patriots gunners overran several return men in the preseason, but Harmon is typically one of their better coverage guys. Backup wide receiver Matthew Slater was the right gunner on that snap and on the next Patriots punt, when he overran Ginn and missed a shoestring-tackle attempt. The rest of the unit rallied quickly to the ball to hold the return to a minimal gain however.

For the third consecutive season Ryan Allen will handle the punting duties for New England, as he looks to improve on a 46.4 average from last year that was just 26th in the league (out of 34 punters ranked). There is nothing especially impressive about Allen on tape, as his hangtime is average at best, but he does put some nice spin on the ball for favorable bounces. On kickoffs, Stephen Gostkowski very rarely allowed for a return, consistently sending the ball through the back of the end zone. Opponents only had five returns all preseason, but did average a healthy 24.2 yards per return.