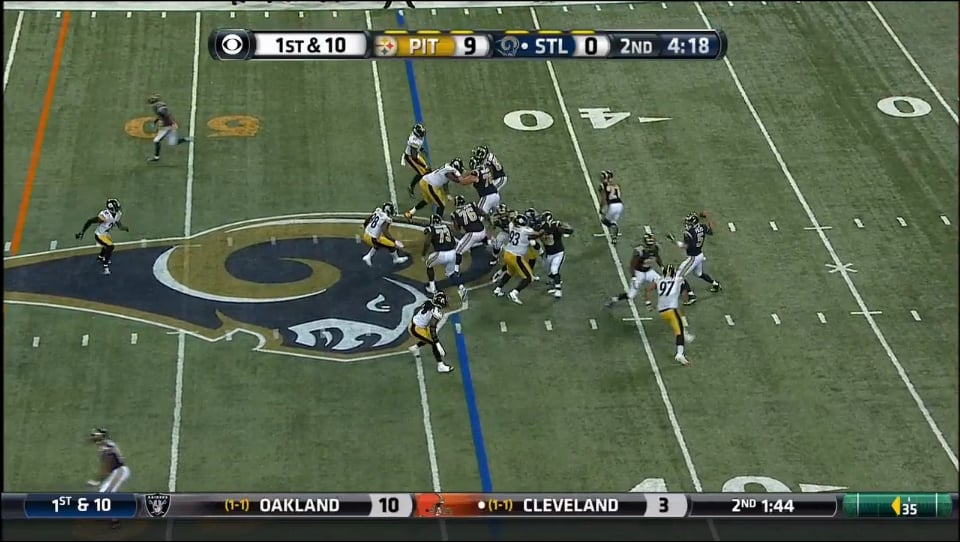 In Week 1 against New England, I highlighted the Pittsburgh Steelers massive tackling struggles, missing 14 stops in their season opener. While the defense played perhaps their best game of the season yesterday against St. Louis, missed tackles continued to plague the unit.

Allen also led the team in tackles with seven, making several nice stops throughout the game, but his whiffs were ugly too. Angles and closing speed in space continue to be an issue for both Steelers safeties.

Mitchell has gained a reputation for overshooting his targets due to his aggressive mentality as a tackler, and while he had some excellent hits on Sunday, this miss was an egregious one, even causing Spence to whiff as well when he bumps him.

Once both defenders miss, Tavon Austin is able to pick up the first down with ease.

Two defenders missing tackles on one play is an especially poor look, but it happened a couple times on Sunday. Tuitt and Spence both can’t bring down Benny Cunningham on this 12-yard carry.

Tuitt’s hustle helped negate big whiffs by Gay and Timmons in the open field on Cunningham here, that would have nearly allowed the Rams to convert a 3rd-and-17 if not for the defensive end’s intervention.

Jones had one of the worst misses on Sunday and knew it, as he failed to wrap up Tre Mason for a two-yard loss, instead allowing the carry to turn into a three-yard gain. You can see Jones punch the ground in frustration after the play.

There were more, a score of ugly misses in the fourth quarter that nearly allowed St. Louis to notch a victory. In the end the defense held firm, allowing only six points, albeit aided by several St. Louis miscues. The tackling will need to improve significantly however, as most of the Steelers remaining opponents won’t offer offenses as inept as this one.