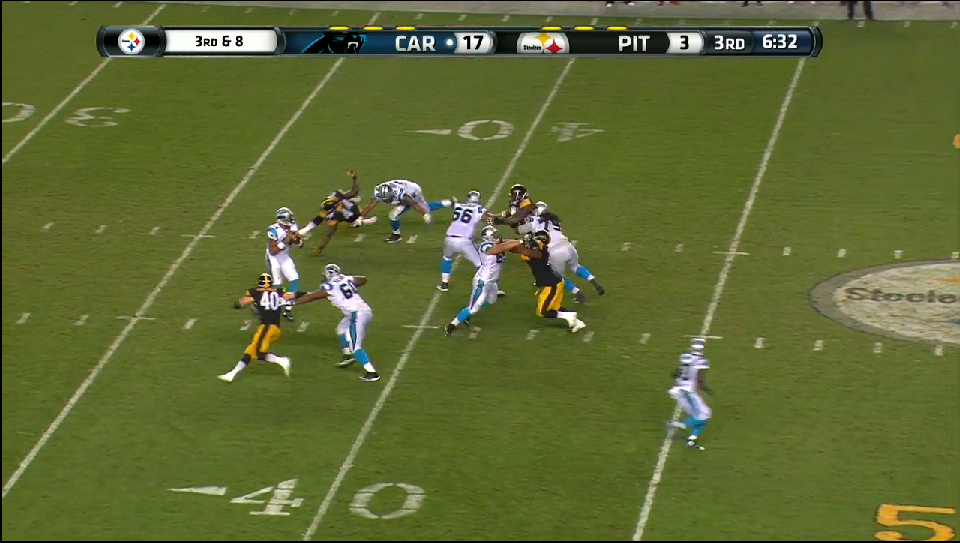 Game notes from the preseason finale between the Pittsburgh Steelers and Carolina Panthers. This will be an abridged version since some of these players aren’t even in Pittsburgh anymore. An eye towards the players here and the New England Patriots in Week One is more important.

– For house-keeping, the second-team offensive line started the game. Steelers at least had some first-teamers last year but Mike Tomlin decided against it this year.

Shakim Phillips and Martavis Bryant on the outside with Tyler Murphy in the slot. Team opened up in a lot of 20 personnel. Either with Nix and a back or a Pony backfield of Harris and Archer. Jesse James was on the sideline.

– Team ran some sort of playaction off a read option look. Problem is it’s a slower developing play and no one to block the five tech if he doesn’t crash. Immediate pressure. Busted play that doesn’t have a great chance of working in the first place. Michael Vick should have handed it off. 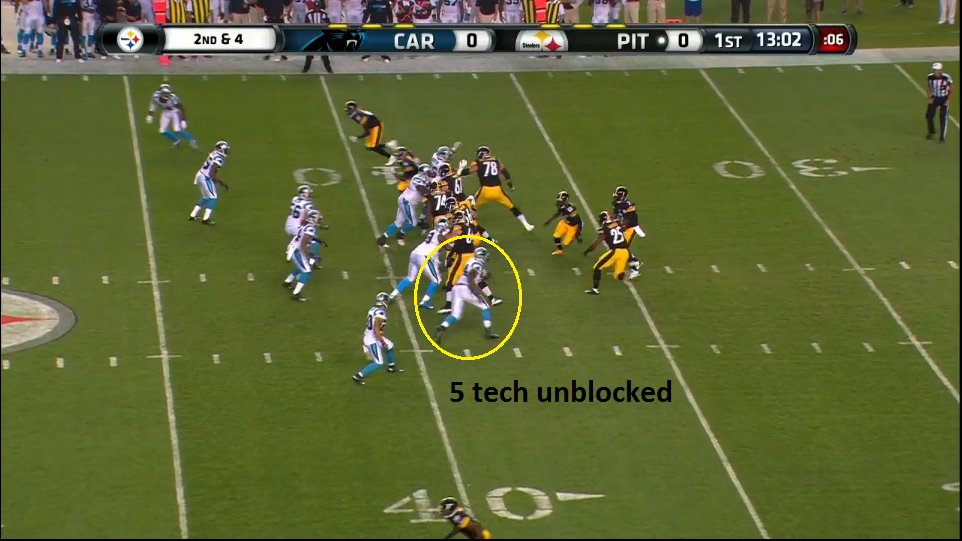 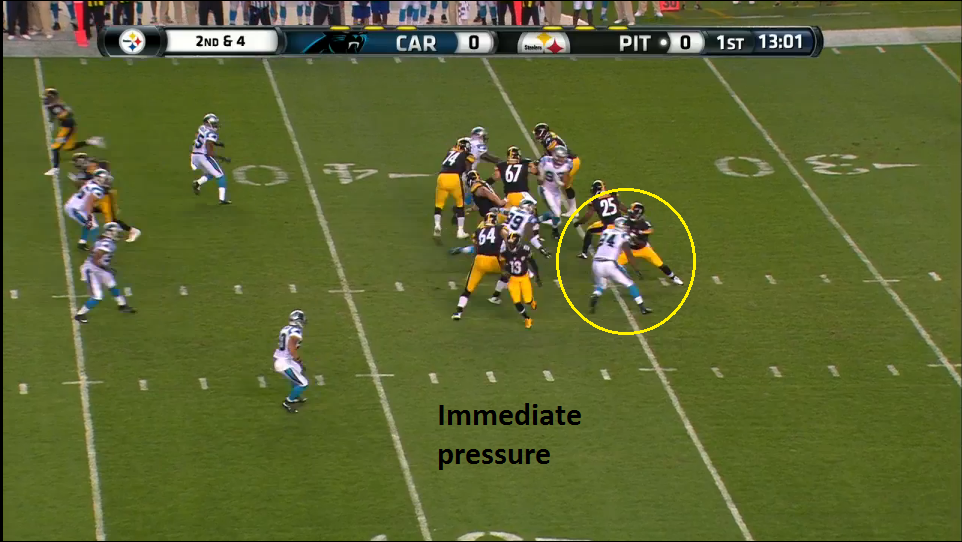 – Nix splashed with the punt block but I liked this punt coverage play better. Nix stayed in his lane, set the edge, forcing the returner inside, and then made the tackle. Dude balled out. 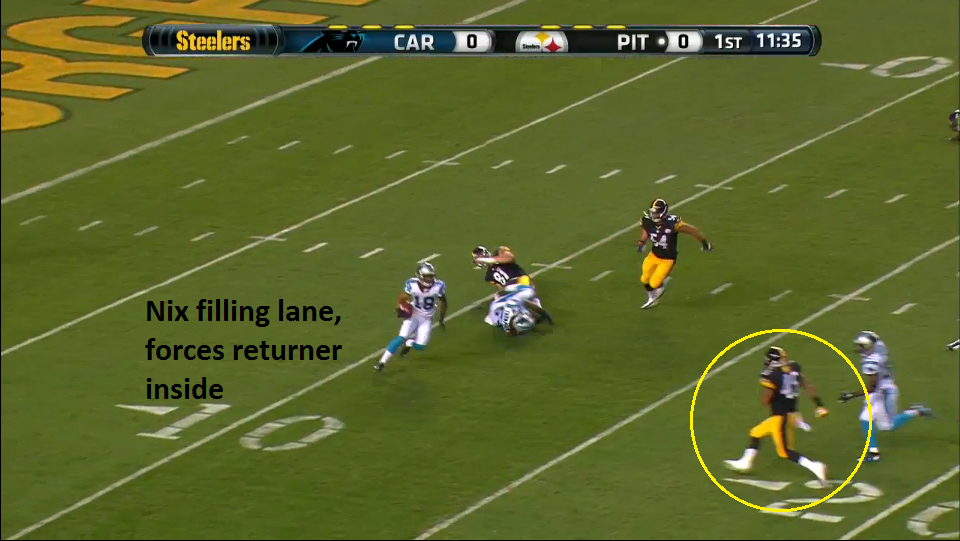 – Panthers ran a lot of heavy sets. Nothing fancy, just power football. 13 personnel here. Chickillo gets sealed inside because the tight end down blocks him, it’s hard not to, but it leaves Shamarko Thomas and Antwon Blake unblocked. Someone should make the tackle. But they fill the same gap, creating a lane. 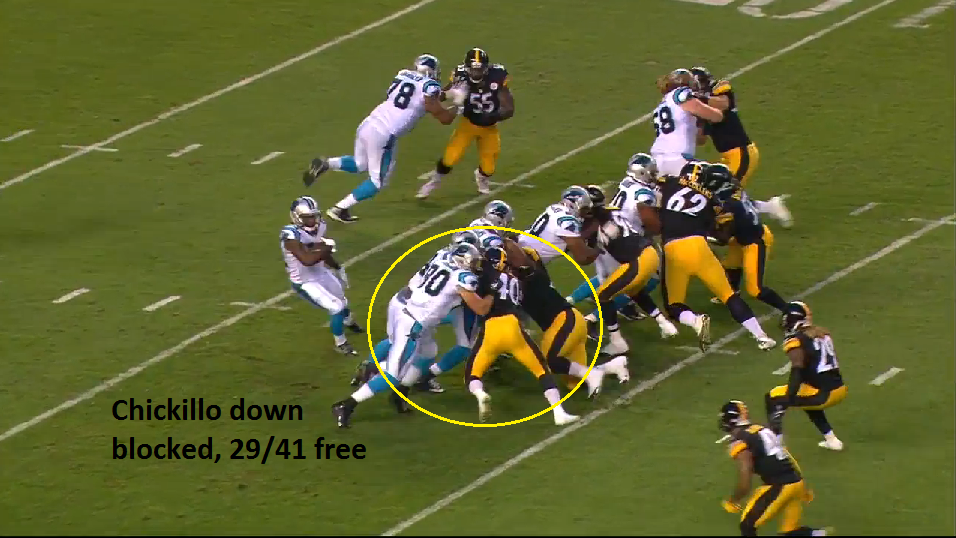 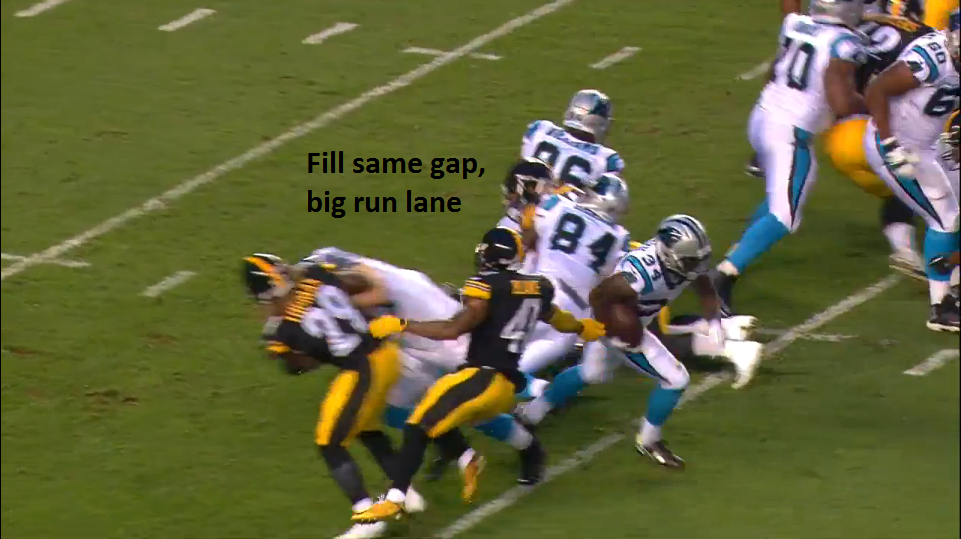 – Chickillo works off the block well but misses the tackle. Has to finish. 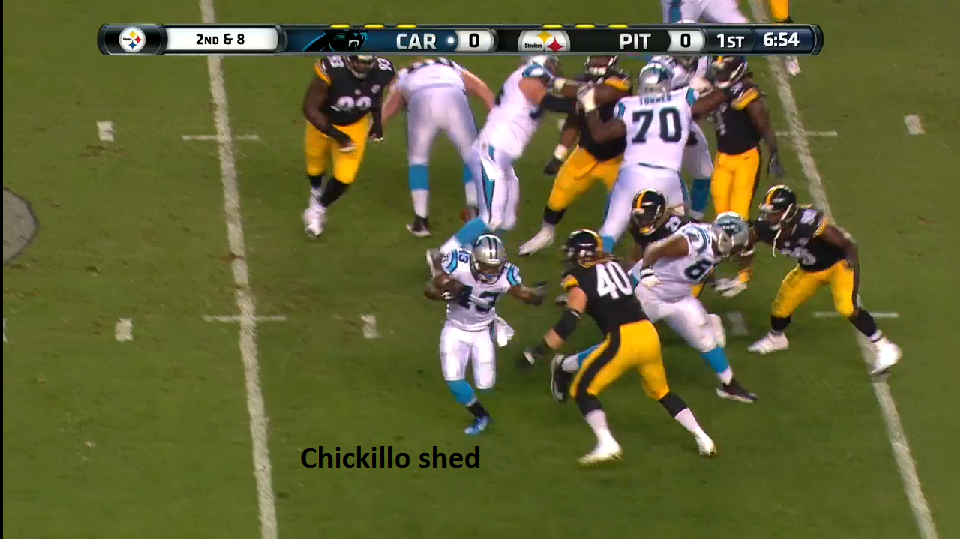 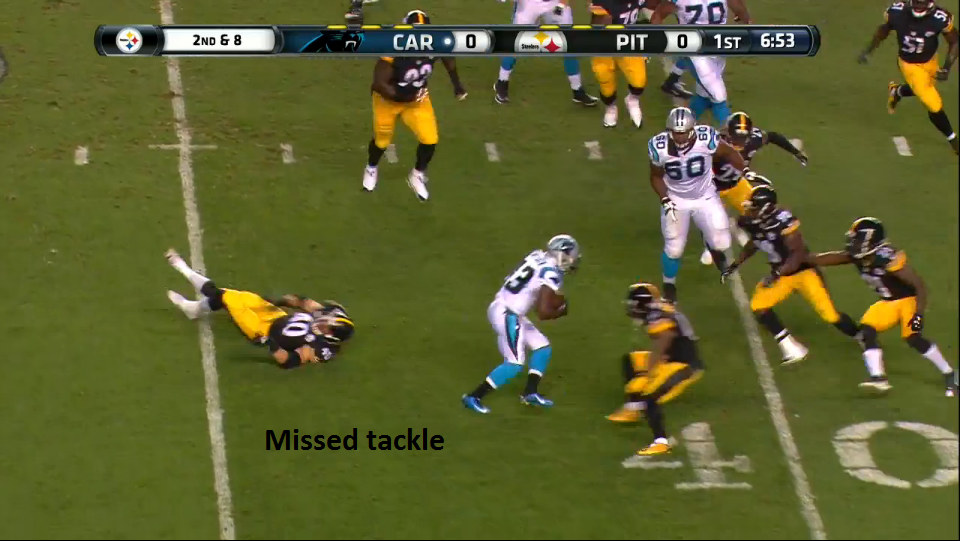 – Ross Ventrone joined Coates as the next set of gunners.

– Sean Spence took on this double-team, including a trap block from the guard, really well, but just couldn’t shed in time to make the tackle. Spence has been inconsistent over the last two weeks and cooled off after what I considered a nice start to preseason. 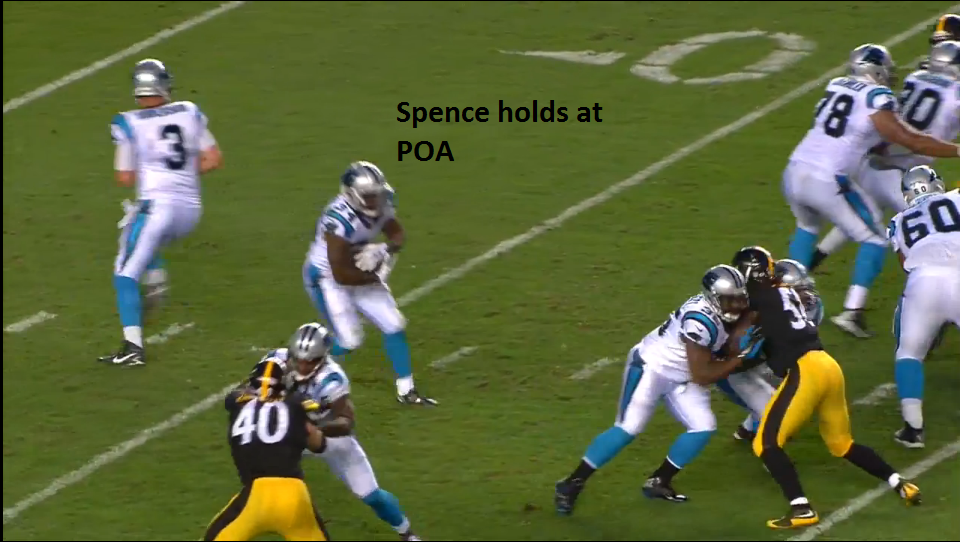 – Ethan Hemer getting blindsided on a screen. 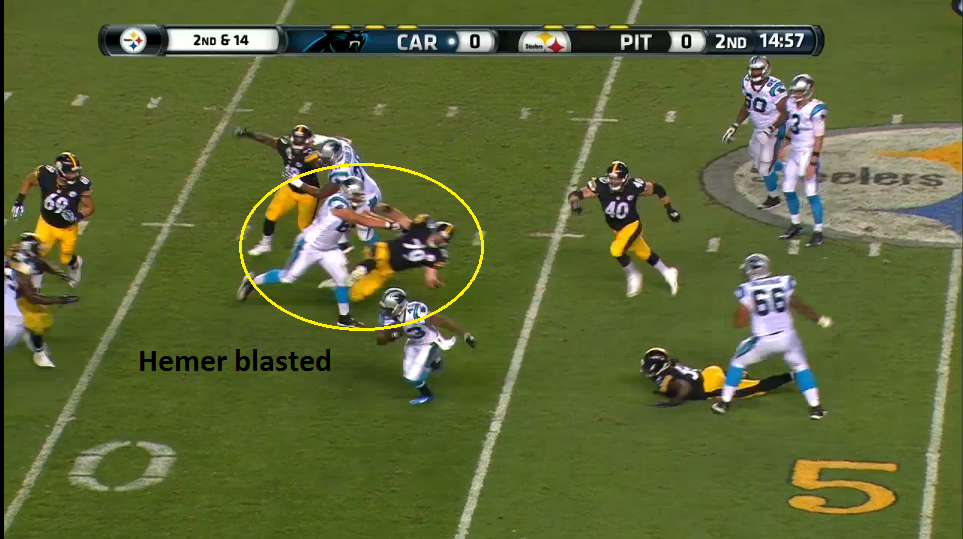 – Shayon Green is at fault here, not Robert Golden, for losing the edge. Allows the back to hit the corner and pick up 15. Green has to spill to Golden, the alley defender. 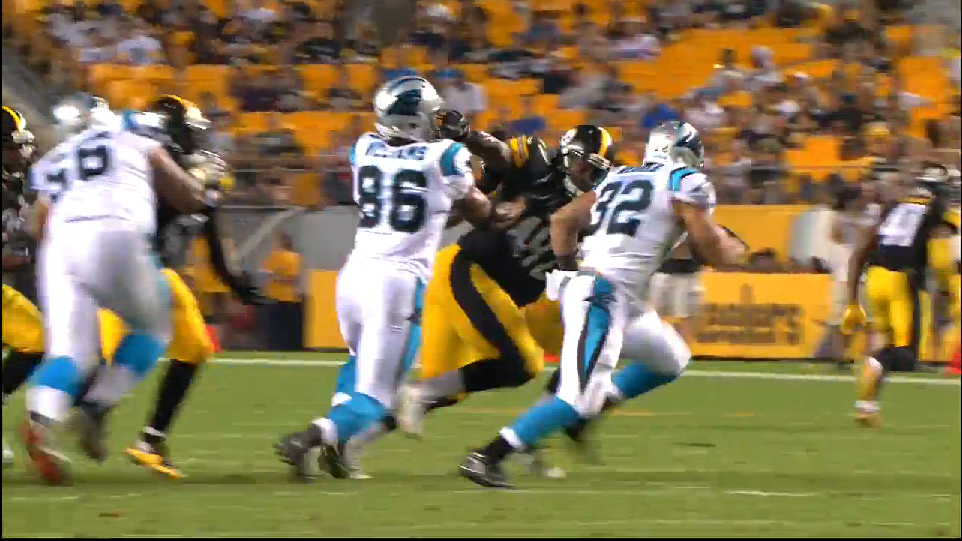 – Too often I see Howard Jones shoved upfield and out of the play like here. Good athlete, just maddening inconsistent. In his second year, he no longer gets a pass. 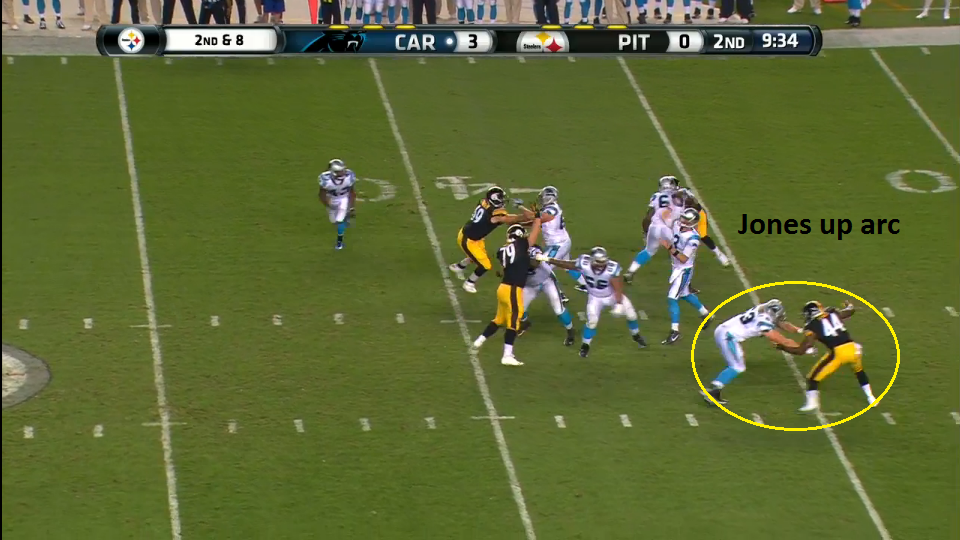 – Shamarko Thomas did take an abysmal angle to the football on Jordan Todman’s long touchdown run but check out Sean Spence’s gaffe. Never reads run/pass keys. On 3rd and 10, just assumes pass. Follows the tight end and never is a threat to the back. One look in the backfield and he would have seen the pulling guard, telling him run. Said last year one of Spence’s issues were reading his keys and his initial steps. Puts himself out of position too often. 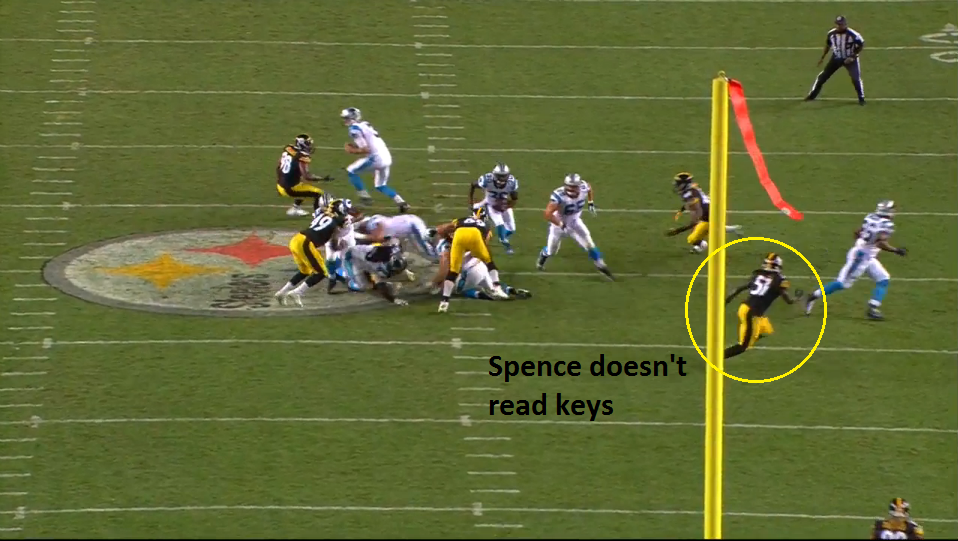 – We talk about Roosevelt Nix’s ability on special teams but Darby was a force there, too. Two tackles from his upback spot against Carolina and I’m pretty sure he had another 2-3 during the preseason. Hopefully he gets a practice squad spot.

– Shayon Green has shown better hand use and ability to get off blocks as a pass rusher. If it came down to keeping Green vs HoJo, I’m taking Green. It does sound like the team is intent on keeping Jones, however.

– Third and six. Steelers don’t have a curl/flat defense. Mesh concept turns into a 22 yard gain. 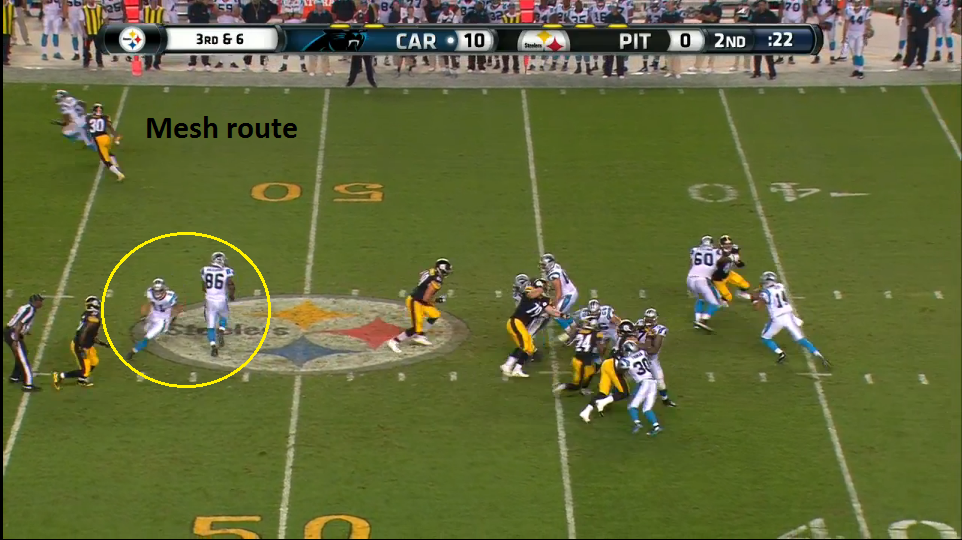 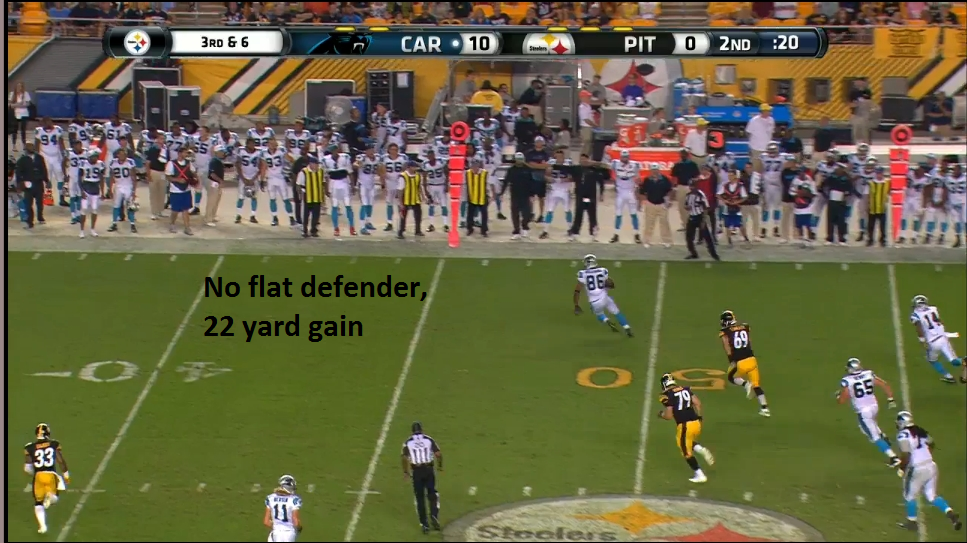 – Touchdown before the half. Doran Grant bites on double-move, an out ‘n up. Has to understand situation. Ten seconds left, let them have the underneath. Nothing over your head. He doesn’t and gets burned.

– Howard Jones offsides on 3rd and 2. Have Carolina a free first down. Maddening. Stuff that gets you in the doghouse.

– Nix was mobbed by everyone after his punt block. Especially giddy was Robert Golden. 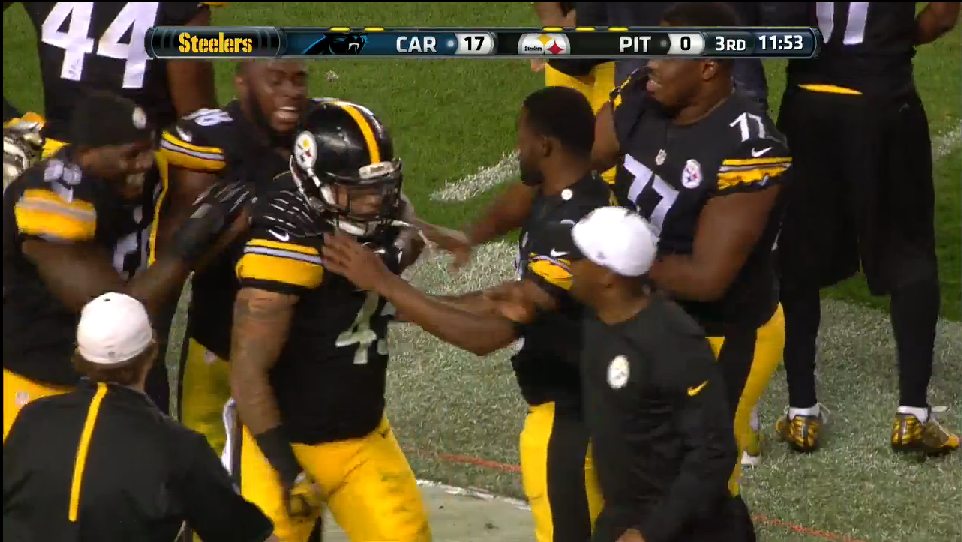 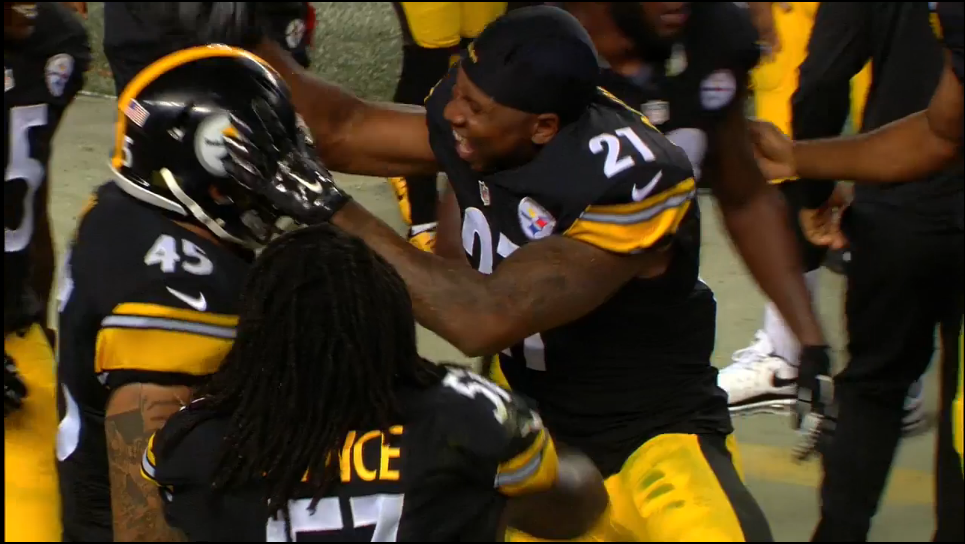 – Landry Jones throwing into quadruple coverage in the red zone. Really makes bad decisions in the red area when windows tighten up. 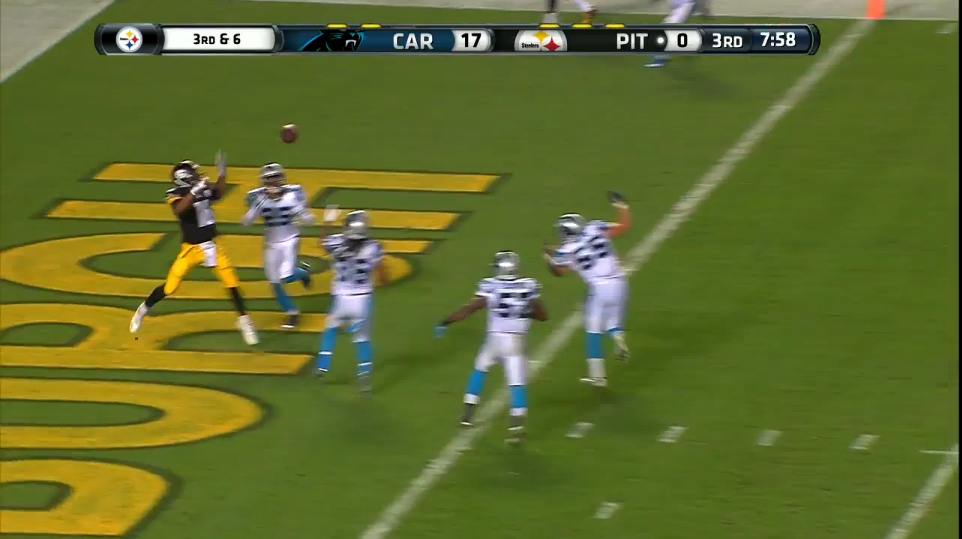 – Jordan Dangerfield, as you’d expect, sacrificing his body on this Power O, keeping the back wide and forcing him near the sideline. 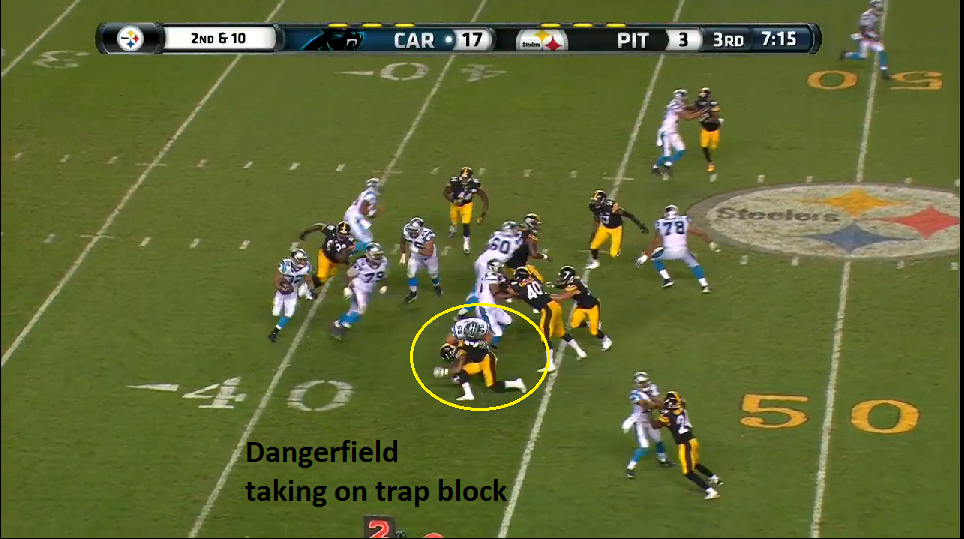 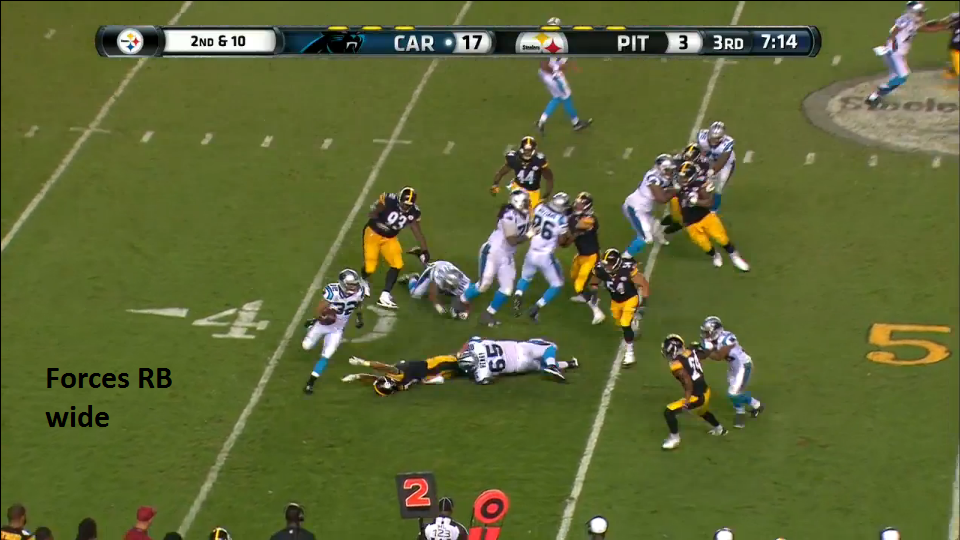 – Difference between HoJo and Chickillo. Both trying to get pushed up the arc by the tackle. Chickillo stays on his feet. Jones ends up sprawling to the ground.

– Daniel McCullers showing the interior pressure threat he is capable of being. Blows through the center and up the A gap, getting pressure in Joe Webb’s face. 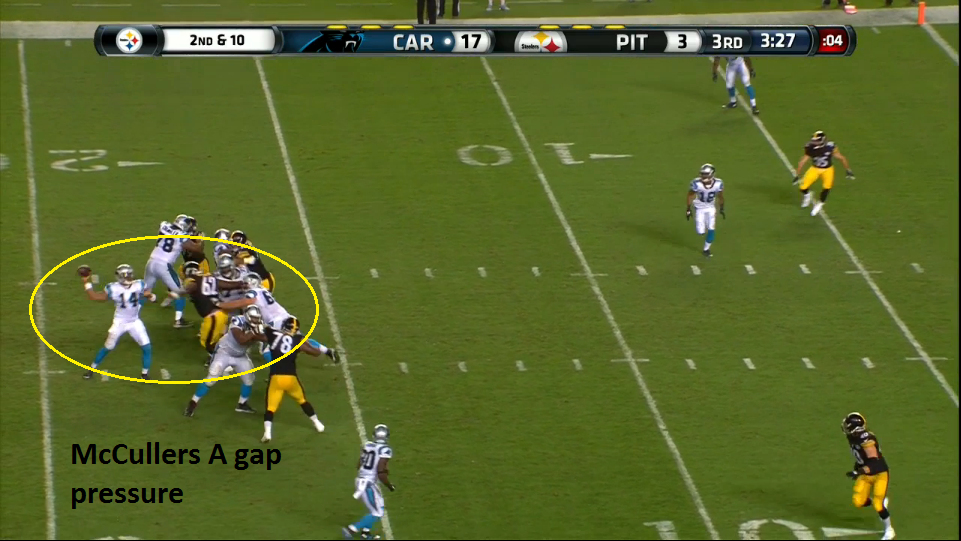 – Think Sammie Coates should have stayed on his feet on this Landry Jones’ near interception. Work back to the ball instead of falling to the ground. 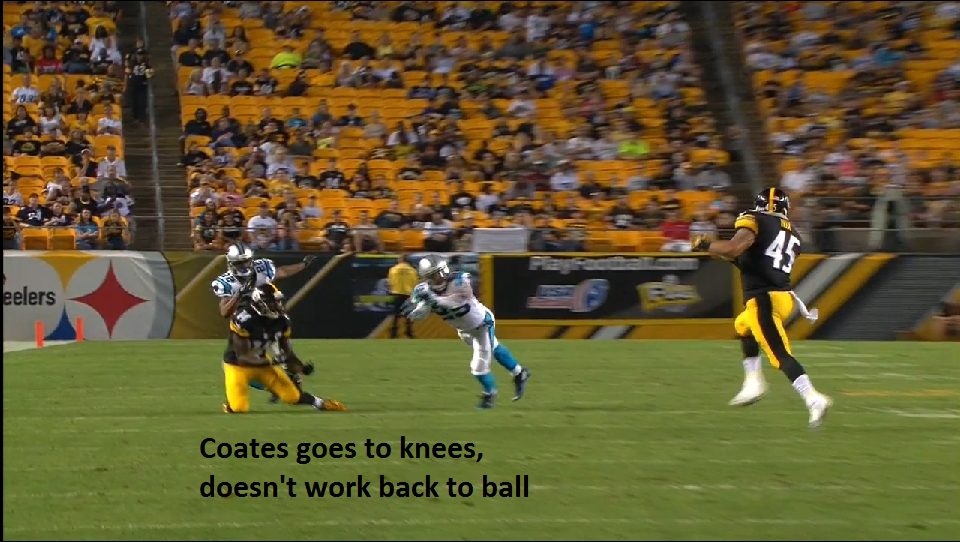 – Gerod Holliman rallying downhill to stop this run. Has a chance to fill and finish the play and then…stops. Decides to try and cut upfield, running into a body and taking himself out of the play. Just isn’t willing to fly in there and sacrifice his body.

– Doran Grant opening up his hips instead of staying square. Receiver runs a post, stems inside, wins, and it’s an easy catch. 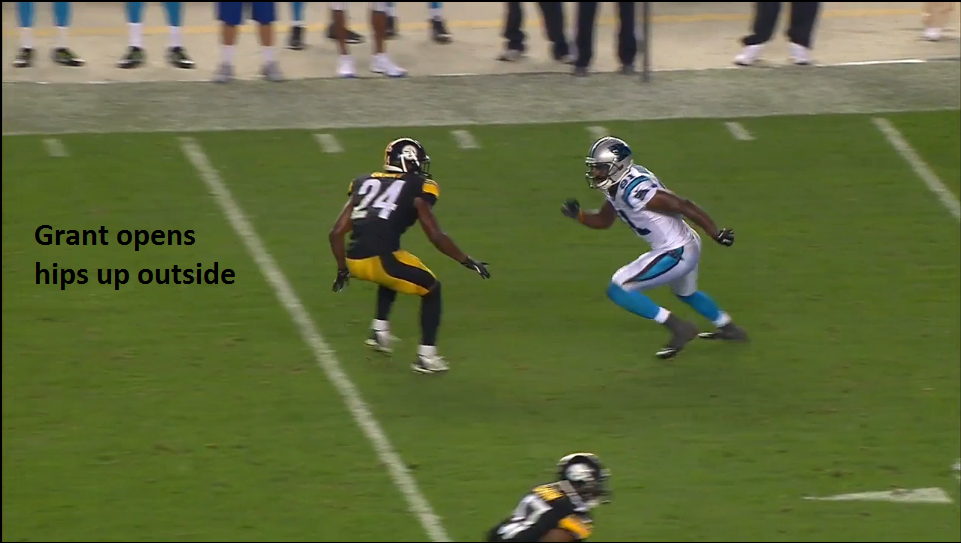 – Ben Roethlisberger staying engaged in the game. Steps out onto the field to watch Coates haul in this long pass in the fourth quarter. 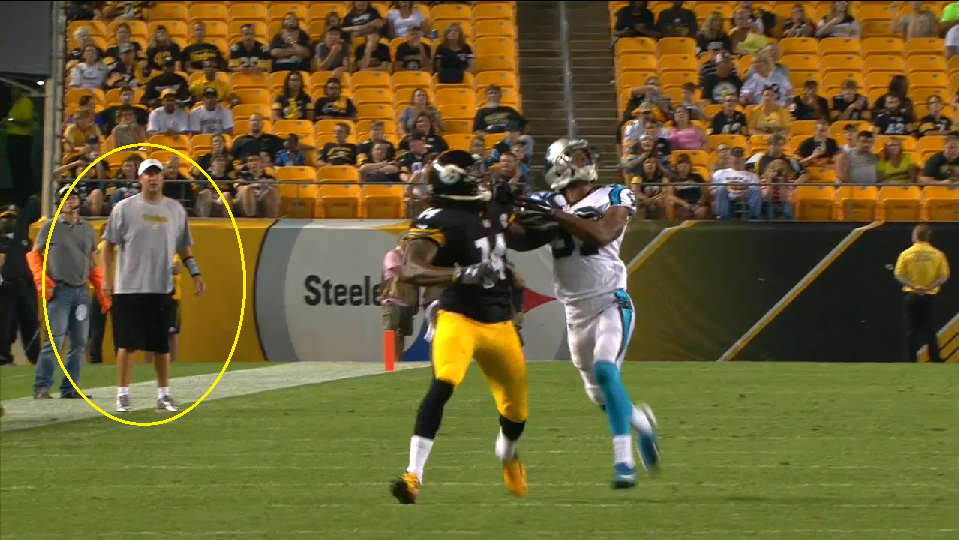 – Nice two gapping by Cam Thomas. Hold the POA and then shed and make the tackle. 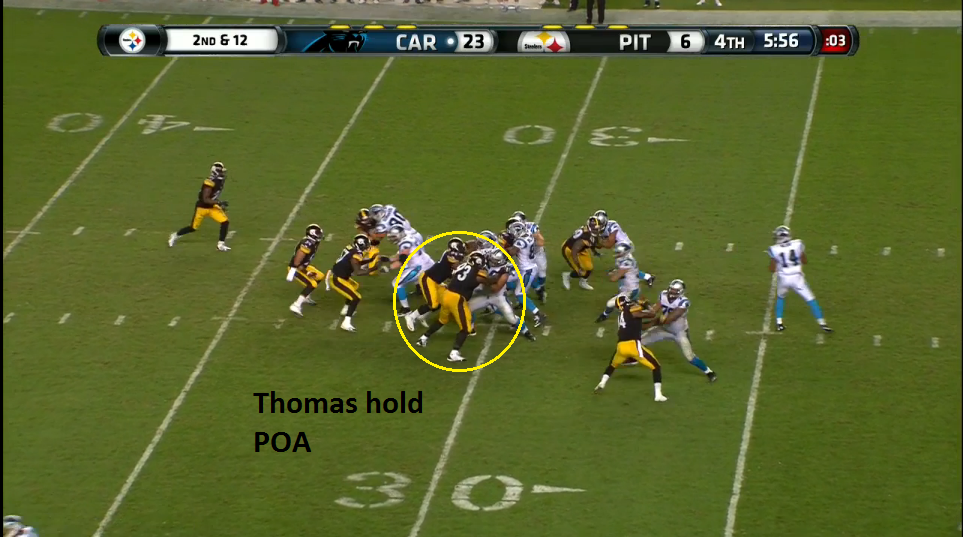 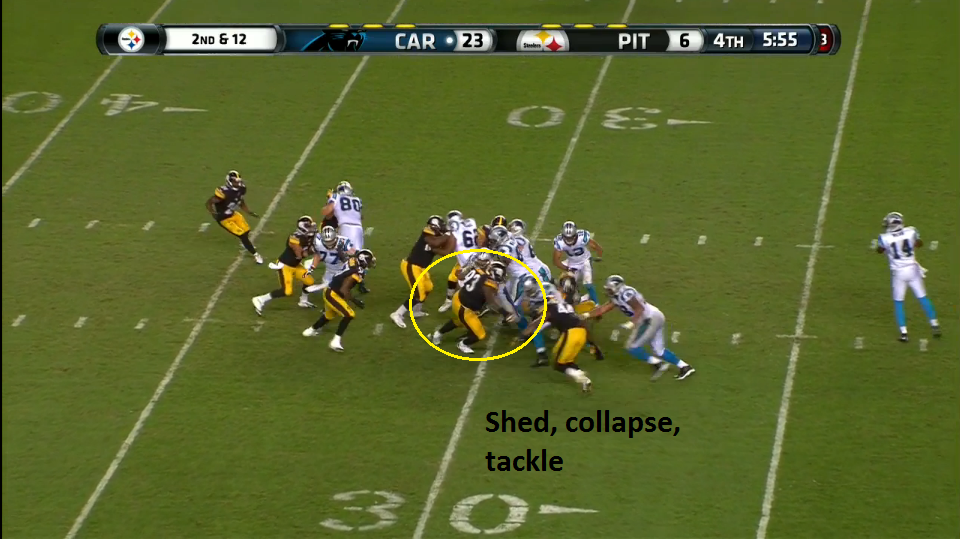 – Only asked to do it 2-3 times this season but Landry Jones shows impressive accuracy moving to his left on bootlegs.

– Reese Dismukes same in at LG to close the game out.

– Alejandro Villanueva using his size/strength/punch to bully this safety trying to come down and support the run. Nasty.

– Weird they decided to suddenly give Will Johnson carries at the end of the game. Hadn’t given him a carry the last two years, camp or the preseason.

– End of the game was just the worst. Two severe injuries on one play. Makes you sick. Cody Wallace had to come in at right guard and Chris Hubbard at center for the final snap, a kneel down.