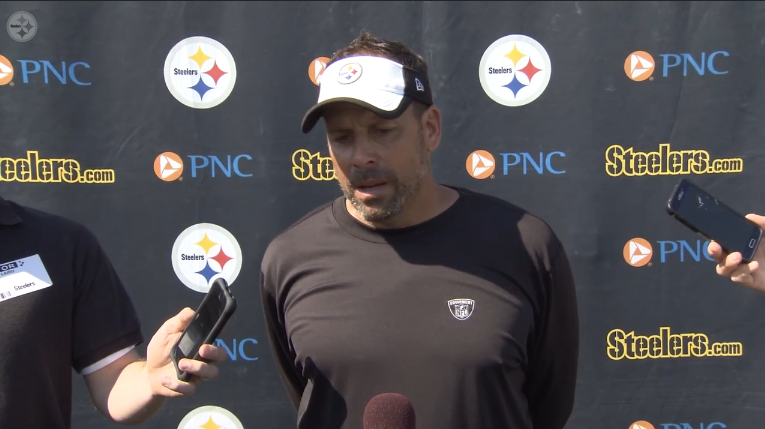 By now we’ve all re-hashed the play and the drive a hundred times, reviewing the situation that puzzlingly caused Todd Haley to call a double pass for Antonio Brown with the Pittsburgh Steelers threatening on their first drive of the game last week. Pittsburgh had bullied their way to a 1st-and-10 at the Patriots 24 yard-line, thanks to an excellent effort from DeAngelo Williams and a few strong throws by Ben Roethlisberger. The Patriots had no answer, until Roethlisberger lateraled backwards to Brown, who opted to take a sack rather than unleash a pass downfield to his well-covered targets. His primary option on the play? Matt Spaeth.

Steeler Nation was furious, and rightfully so. Haley admitted his mistake yesterday, albeit somewhat caustically, but the damage had already been done, not just on that play, but on the ones following it. On 2nd-and-18 after the sack, a Marcus Gilbert holding call brought back a four-yard run by Williams, making it 2nd-and-28 from the New England 42. Obviously not an ideal situation, but two plays to get 28 yards is still extremely plausible for the Steelers high octane passing attack. Instead, the ultra-conservative route was chosen, with Will Johnson taking the handoff on a draw play for six yards, setting the team up for a 3rd-and-22.

You’re handing the ball to your fullback with four career carries against the Super Bowl champions on the road when your offense had been taking it to the Patriots defense all drive long. You KNOW that, best case scenario, you are putting your offense in 3rd-and-20, at least. You can’t knowingly put your offense in 3rd-and-long, not in the NFL. Can’t happen. Next time, just walk across the field and hand Bill Belichick the knife. Basically the same consequence of playing conservative football against a team with the intention and ability to run you out of the stadium with their own offensive attack.

Now, this isn’t a “Fire Haley” article. Not in the slightest. Haley has an extremely gifted offensive mind, and is one of the few Pittsburgh coaches who tries to utilize his personnel correctly for the most part. He’s more of the solution than he is a problem, but he and Roethlisberger need to be much better on Sunday if they want to avoid falling into a dreaded 0-2 hole to begin the season.

I mention Roethlisberger’s name, because it may have been he who audibled to a running play with the Steelers threatening to make it a 21-18 game early in the fourth quarter. 3rd-and-goal from the New England five-yard line, and Ben hands off to Williams, who is promptly stopped for a one-yard loss.

Yes, the play was horribly blocked and I don’t think David DeCastro even properly heard the audible, but why the tricky stuff? Why not put the ball in the hands of your best player during the biggest moment of the game, and let Roethlisberger go to work with his weapons?

Listen, it is Week 1, these things happen, and while that isn’t an excuse, I am simply interested in seeing where the team goes from here. With San Francisco looming on Sunday, the need to play aggressive football has never been greater. The 49ers thrive at running a ball-control offense without much of a downfield passing attack. Make them face an early deficit, force Colin Kaepernick to make plays from the pocket, and you’ve given your struggling, young defense a huge boost out of the gate.

But Pittsburgh can’t call draws on 2nd and 3rd-and-long. They can’t waste scoring opportunities with trick plays or by running their fullback (as much as I love Johnson) several times a game. Let a team like San Francisco hang around, let them operate out of their preferred offensive personnel, allow them to keep play action passes at their disposal, and you’ve essentially handed over the knife again. The Steelers need to go after the 49ers young secondary with both barrels from the first drive to the last on Sunday. Falling to 0-2 with Pittsburgh’s schedule would make for an arduous climb, as Sunday’s contest could be one of the more winnable games on the Steelers’ slate, albeit against a good football team.