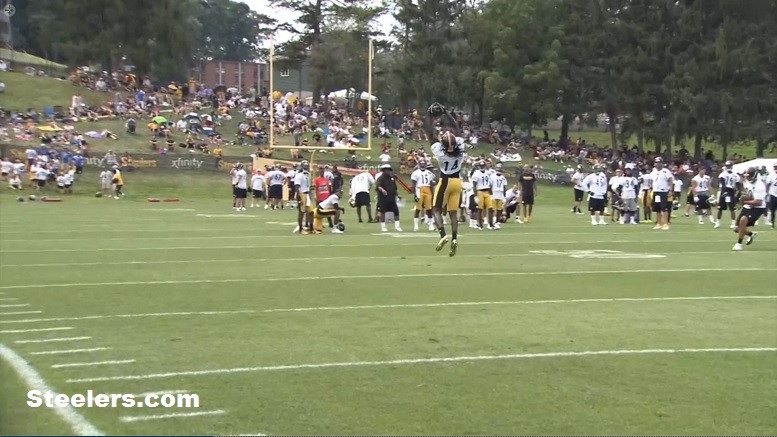 Over the course of the last several practices the Pittsburgh Steelers have been without the services of wide receivers Markus Wheaton and Martavis Bryant and that has resulted in rookie third-round draft pick Sammie Coates receiving more looks during the sessions. At the conclusion of Monday’s practice, head coach Mike Tomlin was asked if Coates is doing anything different than what a typical rookie does at this time of year.

“He’s working hard and improving every day,” said Tomlin of Coates. “In that way, he’s very typical, but I try to come in without any preconceived notions. I don’t want to put him in a box. Maybe he advances in his growth and development faster than some recent ones, maybe he doesn’t. The big thing is he comes every day with the attitude geared to working and improving.”

Like most rookies, Coates has a long way to go in his development as the former Auburn wide receiver still has to learn to refine his route running while firmly getting a grasp on the Steelers offense.

Monday, Coates was asked what areas he thinks he needs to improve in as training camp progresses.

“Everything,” said Coates. “You just want to get better every day. That’s the goal I take every day to practice is I get better with something new.”

“Sammie will be a project, a conversion from the spread offense in the growth and the route development,” Colbert said.

Luckily for Coates, he has some great mentors on the roster helping him improve his game.

“All the wide receivers are helping a lot,” said Coates. “They have been doing it for a long time. It’s been good to work with them.”

The Steelers will play their first of five preseason games this coming Sunday and Coates looks forward to showcasing what he’s learned over the course of the last several months.

“I am ready to get back to playing games again,” said Coates. “I just want to show them how I can help win.”

Last season, it was Bryant who was the rookie wide receiver on the Steelers roster and while he was inactive for the first six games of the regular-season, he made a big impact right away once he was allowed to dress and play in games. Coates appears to be following that same path right now so perhaps he will start seeing the field some on offense during the second half of his rookie season. Unless injuries happen, however, he’s unlikely to see the same amount of playing time this year that Bryant saw during his rookie season.