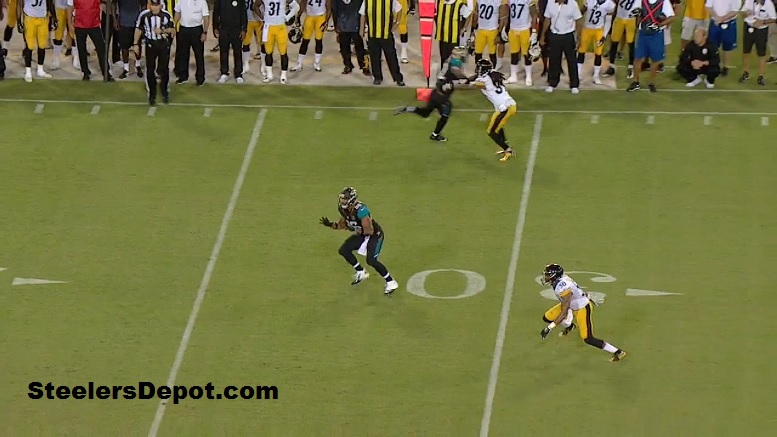 After seeing the Pittsburgh Steelers play so much Cover 2 defense during the first few weeks of the season, I talked to cornerback B.W. Webb about the team’s adjustment to the defensive scheme after three weeks of training camp.

I asked him about any possible breakdowns in Cover 2 that the team may have seen when going back and reviewing the tape yesterday.

“We saw some things that we could do better, that we didn’t do as well as we should be doing,” he said. “We just have to take that from the film and do what we should do out here on the field.”

Yesterday I wrote an extensive breakdown on a few of the team’s Cover 2 mistakes against Jacksonville on Friday, including the error by Shamarko Thomas on Chad Henne’s touchdown pass to Clay Harbor in the second quarter. I asked Webb to walk me through that play and talk about what went wrong, and to his credit, he didn’t throw Thomas under the bus.

“I believe we were in Cover 2 there. I could have got a better jam on the guy to help the safety (Thomas) out. He just hit us in the soft spot really man.”

I appreciate Webb’s diplomacy here, but getting a jam on the tight end on this play from the cornerback’s alignment without drawing a penalty would have been extremely difficult. More on that later.

When reviewing tape from the loss to Jacksonville, I noticed that several times the cornerback were shading to force an outside release in Cover 2, when typically corners are taught to shade and jam to force an inside release and funnel everything to the safeties. That makes the safeties job a little bit easier, because he doesn’t have to cover so much ground getting all the way to the sideline in his zone coverage.

“Initially we want to get people inside to help out the safety, but if they’re taking the outside release, we can’t stop that sometimes, so we just try and get our hands on them as much as possible in Cover 2,” Webb said.

Webb brings up a good point here. We often talk about jamming receivers at the line of scrimmage like it is the simplest aspect of a cornerback’s game and should happen on every snap from a press alignment, but it is rarely that simple in zone coverage. As a cornerback, you can’t miss on that punch or lunge to land your punch, because your timing into your zone drop can be completely thrown off. One misstep in this league can be a big play or a touchdown for the other team, so if you can’t initiate contact, or have to go out of your way to do so, you need to stay assignment sound and not try to force a strategy that isn’t available to you at that time.

Also, with today’s rules of no contact with receivers past five yards, even the simplest jam can get you called for illegal contact. In fact, that is exactly what happened to Webb when he tired to jam Arrelious Benn on Friday, despite the fact that the cornerbacks punch was clean. There is just a very fine line for cornerbacks and contact in today’s NFL, so jamming and forcing a specific release from a receiver, especially from off coverage, is very difficult at times.