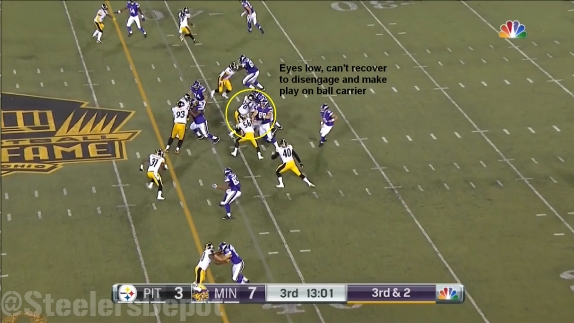 Though Pittsburgh Steelers rookie sixth-round draft pick L.T. Walton had been running as the second-team left defensive end for the length of the offseason, his chances of making the roster improved following the move to place Clifton Geathers on injured reserve, in light of Cam Thomas’ training camp performance.

Unsurprisingly, he came into the Steelers’ opening preseason game as the second defensive lineman in on the left side, although his entrance into the game was delayed because second-year end Stephon Tuitt had an extended performance.

Tuitt exited the game in the middle of a drive with five minutes left in the second quarter, after the Vikings converted a third down. Walton was in on the next play, which resulted in a 34-yard touchdown due to a blown coverage assignment.

Although there was nothing spectacular on this play about Walton’s result, I do like the way that he got there. What you see immediately is footwork, keeping his legs moving, and using leverage in order to initially drive the guard back in the pocket. The lineman ultimately settled down four yards into the pocket, however. This is not a complete play from Walton, but it showcases several components that will be an asset when it all comes together.

But all together it is not, at this point. There were certainly times in this game in which the rookie looked lost, as on a 3rd-and-7 play at the end of the half. For some reason, Walton thought that he should take the outside, running into Bud Dupree. If this was an attempt at a stunt, the two rookies executed it disastrously.

Outside of a few plays, however, it did get better from there once we got into the third quarter. On the first play of the half, he showed pocket awareness, spinning toward the open side of the field as the quarterback rolled that way. He showed hustle getting in on the tackle at the end of the 10-yard completed pass.

On the next play, he kept his eyes in the backfield, absorbing the right tackle’s attempt at a reach block before coming up to make the stop on the running back, who had already been tripped up prior to getting there. It’s a play that Walton would have made anyway thanks to his awareness and positioning.

Walton again made the next stop on second down, this time showing hustle to chase down another reception. Coming out of a three-point stance in a nickel look, there was not much time to get a rush on this screen pass, but he came off his blocker quickly once the ball was in the air and made the tackle to set up a third and short situation.

On this third down play, however, he did give a glimpse on something else that he has to work on, which is focus. His emphasis here was controlling the point of attack and gaining ground, but he took his eyes off the ball. He was unable to disengage from the block as the ball carrier slipped past.

This was not the only occasion in which he was knocked off his assignment, and that was certainly his best series of the game. At other points in the game, he spent an uncomfortable amount of time on the ground, which is something that John Mitchell said he did not do in college. Walton is dealing with a learning curve. It’s there to see. But he is making progress, and his athleticism will help him contribute in a rotation as a rookie.