Fourth-year Pittsburgh Steelers inside linebacker Sean Spence is just three snaps shy of being one of only three defensive players for the team to log at least 100 snaps thus far this preseason. In other words, he has logged a lot of time on defense already.

He has had a comparatively heavy workload especially in the last two games with Lawrence Timmons sitting out with a turf toe injury. Both he and Shamarko Thomas, as the starters, logged 34 snaps against the Packers on Sunday.

In spite of being in his fourth season, this is only the third preseason in which he has gotten the opportunity to participate, and the second season overall, after suffering what was potentially a career-ending knee injury as a rookie.

Spence has shown a much more confident and aggressive level of play so far this year, as well as an increased aptitude for shedding blocks, although his size does continue to enter into the equation.

Another burden that all of the inside linebackers are being tasked with this season is adjusting to the Cover 2, in which they have greater responsibility in deep zone coverage, making it all the more critical that they read pass as soon as possible. Aaron Rodgers’ play action on this early 30-yard reception had both linebackers coming forward, with no chance of catching up down the field. 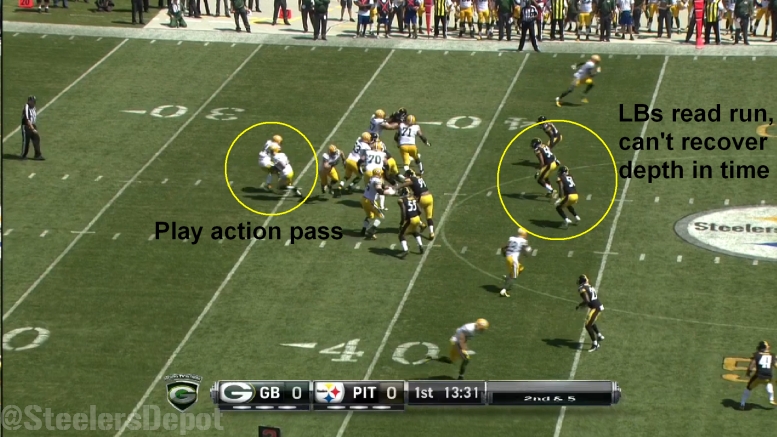 Spence was also taken advantage of at the goal line, as he was placed in a one-on-one situation with fullback John Kuhn. It was all he could do to try to fill one of two lanes, lain open wide by a schematic victory for the Packers, who double teamed Stephon Tuitt well out of the play.

The result was a walk-in touchdown from seven yards out. With a pair of defensive backs blitzing and Ryan Shazier dropping into coverage, there was little chance that the defense could defend this run.

Of course, things got better for the defense after that clinical opening drive by the Packers. Rodgers was stuck on his own one-yard line to begin his second drive, and the Steelers put him on his back in the end zone.

Spence contributed his part on the blitz, initially lined up in coverage on the tight end in the slot. He was granted a free lane into the backfield because the right tackle’s attention was drawn elsewhere, and he showed impressive pop and power bull rushing Eddie Lacy in pass protection.

Spence met Lacy again on the first play of the second quarter, but this time in the hole with the ball in the running back’s hands. The linebacker did an excellent job of identifying the hole after Shazier was directed out of the play, wrapping up Lacy low as he attempted to spin to the side.

Perhaps even more impressive was his diagnosis and pursuit of James Starks’ second and one carry on the Packers’ following drive. With the ball on the right hash mark, Starks took the ball to the short side on a zone run, but Spence expertly knifed through the traffic to be the first player to make contact on this two-yard loss.

Spence played through the entire length of the first half, and as far as could be ascertained from the available tape and data, executed all of his assignments without making any clear mistakes, even if initial appearances may suggest fault on his part on a pass play or two. But he continues to show himself to be an instinctual player, and his added physicality is a welcome sign this year.