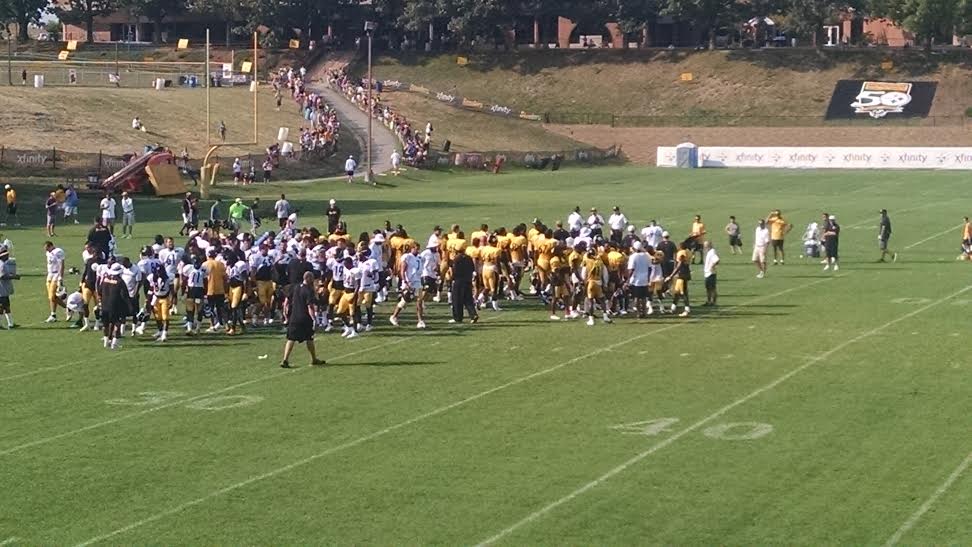 Welcome to Fight Club, otherwise known as Pittsburgh Steelers Training Camp Practice #16 of 18, where the players have gone stir-crazy and cabin fever is looming over the team heading into their final two practices. Today was absolutely the wildest, weirdest day of camp with a lot of short tempers and aggressive behavior. More on that in a bit…

Yep, punters are people too, and Berry had a nice day with hangtime and distance, launching a few punts as well as he’s hit any in practice. His performance even prompted Mike Tomlin to comment to incumbent Brad Wing, “He’s kicking your ass today, Wing!” (per Chris Adamski of Pittsburgh Tribune-Review).

Chickillo was kicking butt in one-on-one drills, making several lineman looks bad with his physicality and first step. He swallowed up Dri Archer in the backfield during team drills. He plays every snap with a vengeance and uses his length and hands much better than Bud Dupree right now. He might not have the same ceiling as Dupree, but with the dropped weight, Chickillo is no slouch of an athlete. Dave Bryan made a very convincing case for why Chickillo may not make the 53-man roster, but I have no idea how you cut this guy. Easily one of the best 53 players on this team, and even at a loaded position, I believe Pittsburgh will value that.

Darby was a man unhinged today, continuing to bring physicality on every snap. He laid a big hit on Tyler Murphy as the receiver reeled one in down the seam, and also wrecked big Roosevelt Nix on one carry. He showed off tenacity in coverage too, ripping the ball away from Kenzel Doe in goal line coverage drills right after the pass arrived.

Dieffenbach is a great kid who works hard and is still returning to his pre-knee injury form, but he looks physically overmatched in games and in practice so far. Daniel McCullers makes a lot of linemen look bad with his power in one-on-ones, but Dieffenbach got absolutely bullied twice by McCullers, once getting his punch swatted down by a ferocious paw of the big defensive lineman. In fairness Dieffenbach did show nice form to win against Niko Davis, but that isn’t a guy who is going to be playing a lot on Sundays. If Dieffenbach was just stronger he could complement his technical prowess much better, maybe time on the practice squad could help him out.

I almost feel bad for Holliman, as the distance between he and Darby, Ian Wild, and even Jordan Dangerfield grows every day. He’s even tried to put his shoulder into a few guys on occasion, but is really just a limited athlete who doesn’t show the consistent intensity to play at this level. He got beat badly by Shakim Phillips in one-on-ones, as the receiver jab stepped inside before releasing for a fade to the corner of the end zone. Holliman fell for the fake and jumped inside right away, resulting in an easy, uncontested touchdown catch for Phillips. He even tried to set the edge against the run (kind of), but B.J. Finney pulled and absolutely engulfed him on the kick-out block.

He hasn’t made it to this list very often, but with his reps diminishing daily, Rahrig is running on fumes in Pittsburgh. To his credit he works really hard, but he’s just physically overwhelmed by NFL-sized players at the point of attack. Today Mike Thornton blew right threw his punch, knocking Rahrig back a few yards in one-on-ones. Tough kid, just isn’t built for the NFL.

-Thought L.T. Walton showed some nice dip around the edge on stunt pickup drills against the offensive line. Kid has really flashed more than I thought he would as a rookie. He doesn’t win every rep, but he rarely gets bullied or looks bad. His issues all appear fixable, which is a great sign.

-I know it is tough coming to camp late, and he hasn’t gotten a ton of reps in team drills, but I don’t think Joe Okafor has shown any semblance of life in any aspect of camp. He’s got some interesting physical traits, but he’s totally lethargic in positional drills and in one-on-ones/blitz pickup. Got to make a splash with the few reps you get, and he’s basically been invisible.

–Cam Thomas was really coming hard in stunt pickup drills, beating B.J. Finney inside twice. He’s got an extra burst to him and has worked his tail off in camp. I’m ready to put the past behind us if you all are. I know, I know, not quite yet. Understood.

-Poor Braylon Heard. He doesn’t have a shot of making this team, and he gets wrecked a couple times every day. Today he was caught up in a gang-tackle, which Steve McLendon forcefully removed him from by the back of his helmet, sending Heard crashing to the ground. He went to get up and was bumped back down by Jarvis Jones. Still got back to his feet and sprinted downfield several more yards. Does that after every run. Tough kid.

-Shakim Phillips had a nice block on Jordan Sullen that allowed Jawon Chisholm to bounce a run outside for a big gain. The young running back had a couple nice carries today, continuing to reinforce that he is a strong practice squad candidate.

-Another good day from Tyler Murphy. His practice squad chances are going up I believe.

-So the fighting first started when Doe tried to catch an out route at the goal line, and Darby played the pocket beautifully to rip the ball free. Doe took offense to that for some reason, taking a full swing at the safety. Darby jumped up in his face mask jawing (as always), and Cortez Allen had to step in between the two players. It almost escalated when a few receivers ran over, but Bruce Gradkowski lightened things up quickly by running around and chirping in everyone’s face playfully.

The testiness continued in team drills, when Darby smacked Nix in the hole on one play, then jumped up yelling and carrying on like he always does. The two players went nose-to-nose for a minute, then Gradkowski again sprinted down the field and was yelling nonsense jokingly. Kevin Fogg gave him a playful nudge, and then Darrius Heyward-Bey went wild, running through the group of players and tapping everyone on the helmet while hooting and hollering like crazy. So yes, it started off mostly playful, but then…

I’m not sure what happened, but Bud Dupree lost his mind today, and the Lord only knows if he’s found it since then. During one particular play in team drills, Dupree somehow got mixed up with Kelvin Beachum, and the two tussled after the play. Cam Heyward and others ran over to break it up, and a dog pile ensued. Jarvis Jones, not the wisest member in the bunch, ran over like he was about to start something, but was quickly grabbed by a couple players, I think Maurkice Pouncey was one of them. Dupree would not stop going after Beachum, at which point James Harrison grabbed the rookie and physically dragged him away from the pile of players. Dupree continued to try and get to Beachum, even with Ramon Foster reportedly yelling (via Ken Laird), “It’s over, what are you trying to prove?!”. Heyward eventually had to go over and help Harrison calm down Dupree, and even Antonio Brown came over to talk down the outside linebacker.

It seemed everything was finally settled, but then one-on-ones against the offensive line commenced following the team sesson, which just brought more trouble. Seemingly unprompted, Dupree kept popping off during the drill, until Foster had simply had enough. The offensive guard took off after Dupree, who literally backpedaled away from Foster until enough teammates were between them to prevent an altercation. Foster calmed down enough to return to drills, and Shayon Green tried to get Dupree to chill out. To no avail however, as Dupree went right back to jawing at Foster, until Tomlin himself grabbed the rookie by the jersey and physically threw him out of the drill. Never seen anything like that.

Dupree went down to seven-on-seven and seemed to finally calm down there, but Harrison was right back in his face when the group moved over to the final team session of the day. Dupree is typically an even-keeled guy by all accounts, so to go after two of the classiest leaders on the team is a really strange move. Certainly the grind of camp gets to everyone, and I don’t see this as a long term issue, but it was certainly alarming that Dupree could not be calmed down until the head coach himself physically stepped in. And running away from Foster, oh man, that wasn’t a good look. Good luck living that one down.