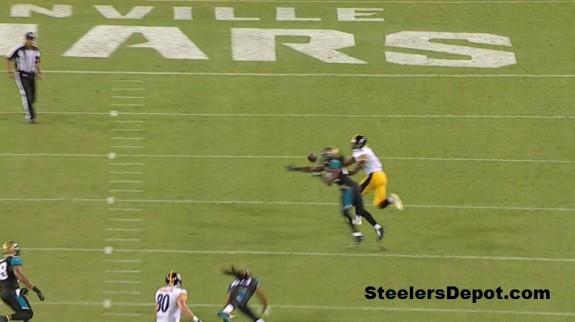 Thus far, through two preseason games, the Pittsburgh Steelers as a team have run a total of 130 plays on offense. 86 of them have been designed pass plays, including four sacks and one scramble, while just 44 plays have been designed runs. Basically math will that you that that is not far off from a two-to-one ratio.

As an offense, the Steelers have attempted 81 passes and completed 45 runs, which is a significant discrepancy. For comparison, the defense has faced 60 passes and 56 runs.

Of course, part of the reason that Pittsburgh has relied so heavily on the passing game during the preseason is due to the fact that they have generally been trailing in the games thus far, excepting the early 8-0 in the last game that was a 17-8 deficit before halftime.

The other reason, however, was because the Steelers wanted to get a nice, long look at third-year quarterback Landry Jones, who threw 78 of the team’s 81 passes, only three coming from starter Ben Roethlisberger thus far.

Those numbers will change as the preseason progresses. Much of the research on Jones was completed during those first two games, I believe. They likely already know by now whether or not they plan on keeping him on the roster.

Of course, Bruce Gradkowski, recently freed from the shackles of the Physically Unable to Perform List, will need to get his throws in, but, as a veteran, there really is not much evaluating to be done. Really, he just needs to round himself into game form for the regular season.

It stands to reason, then, that the offense will feature a more balanced run-to-pass ratio over the course of the final three preseason games, even if the running back depth chart seems to be pretty well set at this point.

But the offensive line depth and young tight ends still need to be evaluated in terms of their run blocking, and the offense must apply realistically strategies as to when they would actually run the ball in a game that actually counts, rather than taking added liberties through the air for the purpose of getting a look at their young quarterback.

Only two running backs have seen double-digit carries during the preseason so far, with two tied for third place with six, and the rest having two carries or fewer. Cameron Stingily, whose 11 carries ranks second on the team, has already been eliminated from the competition.

Jawon Chisholm leads the way with 14 carries, though he has compiled just 27 yards, a bit under two yards per carry, for his efforts.

The Steelers likely want to get a longer look at Chisholm especially, as he figures to spend at least the first two games of the season on the practice squad during Le’Veon Bell’s suspension. Josh Harris also needs to get his carries in as he is expected to be on the 53-man roster during Bell’s suspension.

Veteran DeAngelo Williams, he of six carries, could certainly benefit from some more in-game reps with his starting offensive linemen between now and the start of the regular season, as he will be counted upon to be the starting running back for those first two games. Now that the team’s look at Jones figures to be mostly complete, I suspect that we see a more balanced offense down the stretch here.