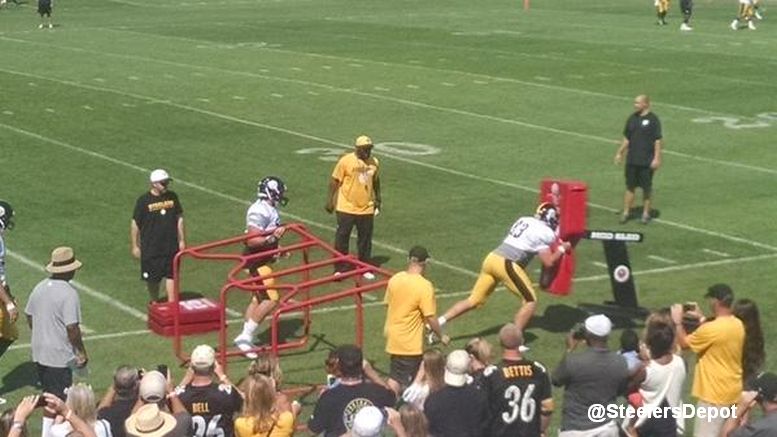 As the Pittsburgh Steelers wrap up their last public practice at training camp today, they have also hit a crucial turning point in the preseason process: as of yesterday, they have actually begun, however vaguely, game planning for their upcoming opponents, beginning with the Green Bay Packers on Sunday afternoon.

This is always a key moment during the process because it signals a slight shift in emphasis in the evaluation process. Rather than running players out there and just seeing what they are able to do, they are now also being monitored for how they translate the game plan that they learned on the practice field to a stadium setting.

It is a bit of a crucial tool to possess in professional football. Of course, planning is also done at the college level, but certainly not to the degree that you see in the NFL. For this rookie group, they may be seeing ways of learning and preparing for the first time.

The game planning work was preceded by one of the more explosive training camp practices just the day before, coming off a day of rest, during which a number of altercations between players took place, so perhaps the mental exertion of studying and preparing for opponents also served to provide a calming effect as the last days of Latrobe tick by.

Among the elements that changed up during practice was, for the first time, the lack of the opening ‘Seven Shots’ 11-on-11 drill, which had opened those sessions on every preceding day of camp. Rather than the defense’s two-yard line, the offense was given possession at their own five in order to work out of the shadow of their own end zone.

Throughout practice, the offense and defense were beset with scenarios that they had to respond to based on the plays fed to them from the sideline on cards. As head coach Mike Tomlin said after practice, “part of our evaluation is to evaluate a guy’s ability to take information off a card and still creating a competitive atmosphere so we still have good game prep”.

Another part of the process, transitioning from camp to meaningful games, is the role of the scout team in simulating players from their upcoming opponent’s team, which is of course an essential part of the game preparation on a weekly basis in the regular season.

That is among the features that were incorporated into practice yesterday, and will continue today during the final open practice before the Steelers move back to their South Side facilities for the final two preseason games before the regular season opener.

The first roster cuts are due in the Tuesday after Sunday’s preseason game, and perhaps some of those cuts will be influenced by whether or not a particular bubble player was able to successfully translate meaningful game preparation to the game. Of course, that will be an even bigger factor during the final roster cuts, but it is a process that begins now.