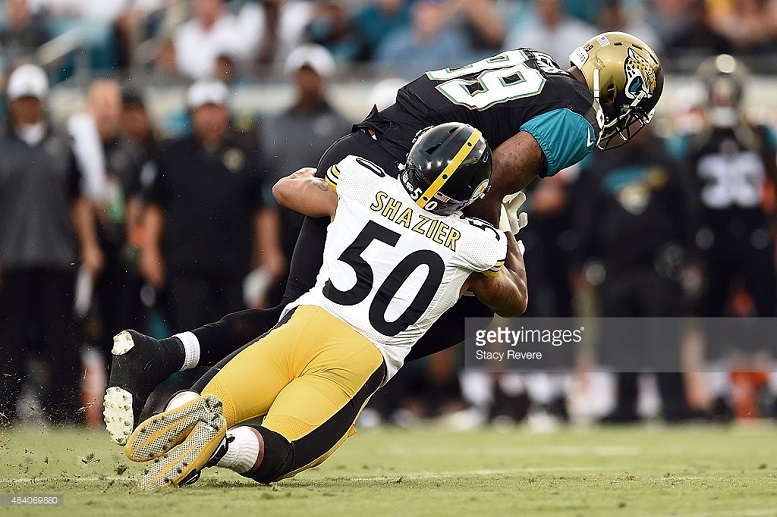 Pittsburgh Steelers linebacker Ryan Shazier has impressed so far in the first two preseason games of 2015 and Friday night against the Jacksonville Jaguars, he surprisingly was still playing in the third quarter.

Even though the Steelers were without the services of injured inside linebackers Lawrence Timmons and Vince Williams Friday night, Shazier indicated after the game that his extra playing time in the third quarter wasn’t necessarily a result of the team being short players at the position.

Shazier led all Steelers players Friday night with eight total tackles and he’s shown the ability thus far in the first two preseason games to work sideline to sideline in addition to being very physical while filling the inside lanes on running plays. In total, the Ohio State product played 41 defensive snaps against the Jaguars and he believes he’s benefiting from that extra playing time.

Last year, Shazier played all of 260 defensive snaps during the regular season as minor injuries resulted in him missing seven games. The Steelers need him to make a huge jump in his second season and so far it looks like he’s doing just that.

Shazier wanting to play in the third quarter Friday night against the Jaguars also shows that he’s slowly becoming a team leader and that he takes pride in what happens on the defensive side of the football even in a meaningless preseason game.

“The thing is, this a team sport, so it’s not really about my performance,” said Shazier Friday night. “I’m just doing whatever I can to help the team. I just didn’t like how we, as a defense, finished the half, so I just wanted to back out there and give a little bit more.”