A lot of recent Pittsburgh Steelers roster talk has centered around how many linebackers the team will keep on the final 53, and if Anthony Chickillo’s name will be among those chosen. I’ve made the case that it should be, but the coaching staff has been very reluctant to give him more snaps over Shayon Green and even Howard Jones at times during camp and the preseason. Chickillo took snaps on the right side during the team’s first preseason game, so he’s definitely prepared to man both spots if necessary. I would love to see him get opportunities to play with Bud Dupree over Green, as Chickillo has clearly been more effective and is a better player in space.

One of the things I like the most about Chickillo is that he rarely gets manhandled at the line of scrimmage. He’s a strong dude, with good technique to lock out against blockers and keep their hands off his frame. Here’s an example of what I’m talking about: 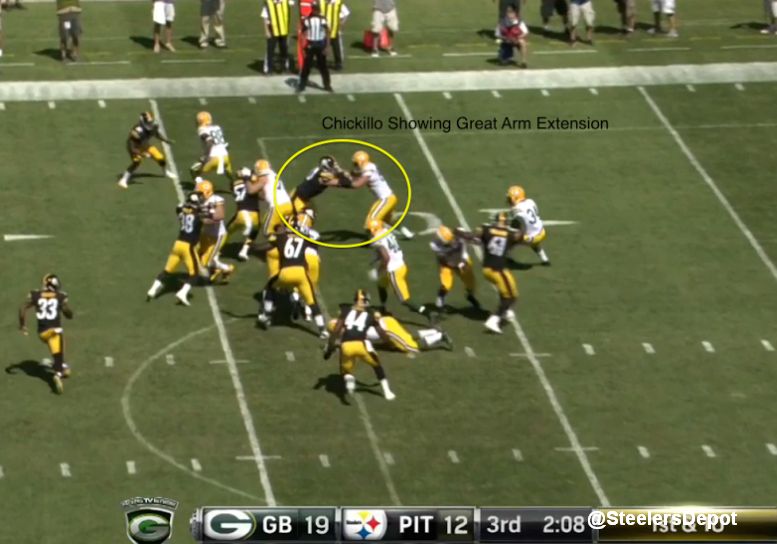 Eyes on the ball, blocker off his frame, arms fully extended to shed when necessary. Positioning is sound, as he can work inside to help out with a tackle there if necessary, but has also set a hard edge and not given any ground to allow the back to work outside. Excellent technique and discipline from a rookie.

Setting the edge is something Chickillo already does like a seasoned veteran. Here he blows the offensive tackle off the ball, keeping his outside arm free and playing with outstanding leverage. 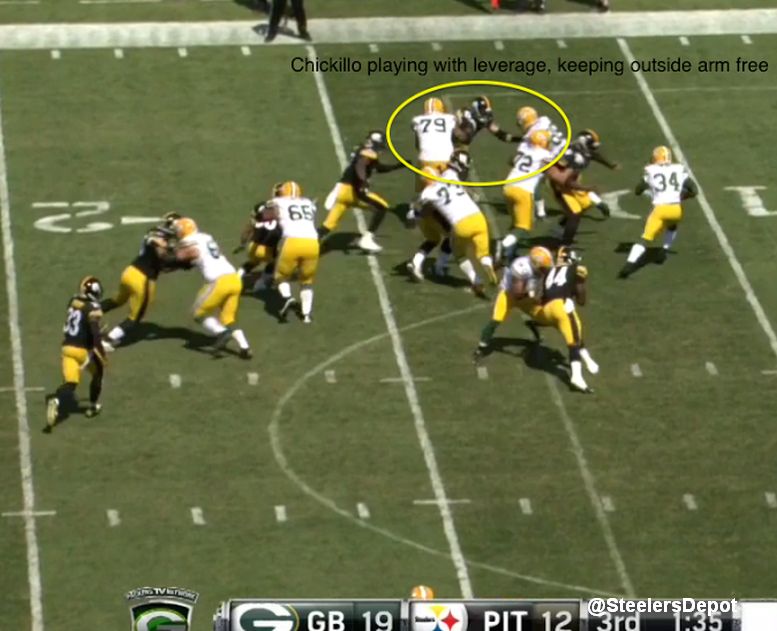 Chickillo actually has to take on a second blocker here, as the fullback (h-back) tries to attack his outside shoulder as well. Chickillo is able to fend him off with his one free arm, pursue the play to the boundary, and still work free to help out with the tackle. I know he isn’t facing Pro Bowlers, but you want to see your young guys do things the correct way, and Chickillo consistently shows excellent form in his all-around game.

Chickillo didn’t have a ton of chances to show off much as a pass rusher, but the glimpses I saw were encouraging. Once (the Green Bay Packers broadcast was annoyingly interviewing B.J. Raji during live action) Chickillo dipped the edge on an offensive tackle with a great first step, something I don’t think will be his bread-and-butter, but that he can clearly threaten teams with from an outside linebacker spot. His ability to win inside and out is enticing, especially if he can utilize his physicality like he did on this snap:

Great burst off the ball, then punched into the offensive tackle’s frame to knock him off balance. Only a quick release by the quarterback kept Chickillo from finishing this play. Love seeing the hand usage and violence from a young guy playing a new position.

How about counter moves, usually one of the later aspects to a young pass rusher’s development? In other words, how do you respond when your initial plan of attack is stymied? 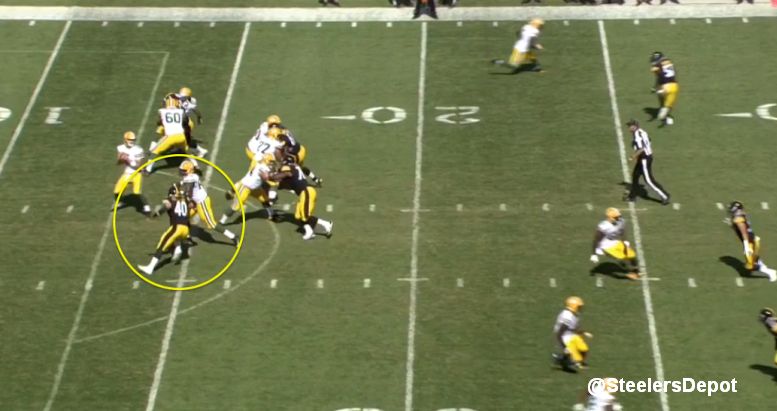 Here Chickillo tries to win the edge at first, but quickly sees that the offensive tackle has abandoned proper form to basically chase the edge rusher to the boundary. Rather than simply continue upfield and likely get run out of the play, Chickillo recognizes his opponent’s mistake (offensive tackle literally turns his back to the line of scrimmage) and seizes the opportunity to win inside quickly with a counter maneuver. Again, if not for a quick release by the quarterback, Chickillo has an easy sack here.

Once you recognize an offensive tackle has a tendency, exploit it. That is what veterans do. On the very next snap the same offensive tackle oversets again, and Chickillo counters inside quickly to force a hurried throw into double coverage. He may have even gotten a hand on the quarterback’s throwing arm, tough to tell from the TV broadcast.

Is Chickillo facing a low level of competition? Absolutely, but he’s excelling against these guys too. He had only 13 defensive snaps on Sunday, and he didn’t have any negative plays amongst them. This is a guy who needs to be playing snaps with your second team at this point. He’s far more well-rounded and consistent snap-to-snap than either Green or Jones, is a more developed player cerebrally, and plays with a nonstop motor and excellent physicality. What Chickillo needs is more snaps against better talent, and he’s done everything possible to earn those opportunities this Saturday against the Buffalo Bills.

You know what you have in Green and Jones, and it clearly isn’t good enough. Chickillo deserves a place on the 53-man roster, and has worked nonstop every day to prove it, even dropping 35 pounds to play a new position. Give him the opportunity to earn it against premier competition before the preseason is over.